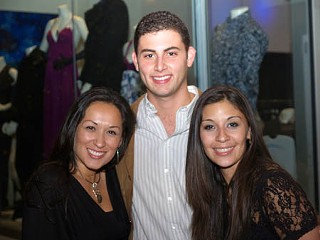 THE PAY OFF I've bitched to high heaven lo these many years about the pathetic display of holiday lights on the Ann Richards Bridge and Congress Avenue and how, as the grandest avenue in the city leading up to the glory of the Capitol, the holiday decorations should reflect that grandeur. Readers have regularly agreed with me, but now I've heard from someone at the Downtown Austin Alliance, who says they are interested in discussing fundraising efforts to amend the situation and would like to discuss the matter with me. Hallelujah, baby! 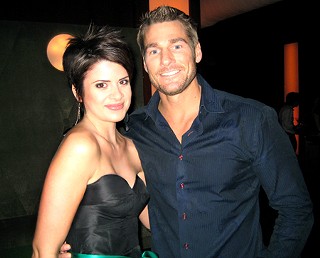 ALLEY-CATTING It's just one damn party after another. Sometimes I wish I could multiply and be everywhere at once, which would play havoc on my wardrobe. But 'tis the season for getting tarted up and going out. Went to the Octo Happy Hour fashion show and cocktail party at Estilo on Wednesday, escorted by the dashing Gabriel Jason Rodriguez, where bon vivant John Livingston introduced me to a woman named Neely who has a sister named Jennifer, astoundingly both named after characters in Valley of the Dolls. I was completely enchanted – and desperately envious... The ultraglam Ralph Lauren party for the Long Center. The store is so beautiful, and partygoers spent generously. I, of course, could not live without acquiring a fab new pair of Ralph Lauren sunglasses, which I've had surgically attached to my face... Next night was a By George party – rare indeed but always fun and always loaded with creative, interesting guests; potent cocktails; and fabulous clothes, natch.

AND YOU ARE? Then we hit the Agence Talent party at the Marq with Shout Magazine Editor Rob Faubion. We'd been laughing about how people come up to him on the street and ask if he's Steve Martin. I related that I am rarely mistaken for someone else and instead hear, "Who are you? I know you're someone." Proving that point, we walk into the party, and within three minutes, a couple of gorgeous model-types glide over and say, "Who are you? We know you're someone." A few minutes later, someone comes up to Rob, asking him if he is Billy Bob Thornton. Surely there's a reality show in here somewhere. Speaking of reality shows, The Bachelor's Brad Womack was in attendance, being affable and charming, but knowing how grueling celebrity life can be, I chose to respect his privacy and not wade through the gaggle of females to introduce myself. Rob's responsible for the parade of eye-popping glamour at the new Sunday night drag extravaganzas at Oilcan Harry's, where it seems that I have taken up permanent residence these days. More eye-popping glamour came in the form of a couple of beauties tarted up in sexy Mrs. Santa outfits. Turns out they are part of the Jigglewatts (www.thejigglewatts.com), a burlesque troupe with a racy holiday show at Esther's Follies that's not to be missed.

'DO WOP Well, I cheated on my hairdresser and went to Bô Salon (www.bosalon.com) on South Congress, since I'd received a gift certificate there for my birthday. I've written about Bô owner Ron King's accomplishments before. He is the quintessential curly-hair expert with dazzling editorial and runway work in New York with his friend Ted Gibson, a hairdresser from Killeen with a line of amazing hair products (available at Bô), who now owns one of the swankest salons in New York. But all that aside, I walked outta there feeling as glamorous as the love child of Jayne Mansfield and Elizabeth Taylor. Any salon that can do that for me gets my seal of approval.