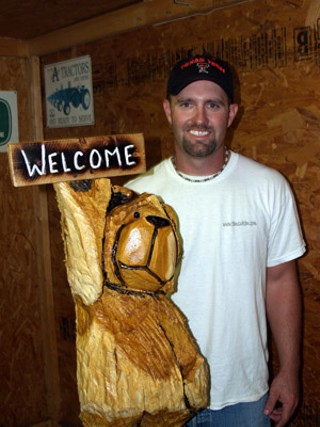 Cam Dockery and a buddy (Photo by Gerald E. McLeod)

Bearly Making It isn't your ordinary chain-saw sculpture operation. Cam Dockery started the business despite living on the nearly treeless plains of Whitharral in the Texas Panhandle.

"Making things out of a log includes two things that I really enjoy," Dockery says with a laugh. "It's kind of dangerous and a lot of noise."

The son and grandson of cotton farmers, Dockery grew up working the land along with his brothers. His first chain-saw art project was done on some old logs and stumps on the farm. "We had some extra time, so my grandfather gave my brothers and me a couple of chain saws to play with," he says. He soon discovered there was a market for the whimsical bears he whittled from the logs.

In high school, Dockery didn't particularly exhibit an aptitude for art, but he enjoyed working with his hands. A few years ago, his family bought the old cotton-gin building on the northern edge of town. After removing the obsolete ginning equipment, they turned the two-story tin barn into a workshop for his enterprise.

Over the last seven years Dockery's business has steadily increased. The first year or two he traveled around to arts-and-crafts shows but didn't like the experience very much. "It was a good way to build a reputation," he says, "but I'd rather be working in the shop than out peddling."

Wooden bears ranging between 1 and 6 feet tall are his bread and butter. Stores in Colorado, Albuquerque, Littlefield, Buffalo Gap, and Dallas carry his work. "For some reason the tourists in Colorado and New Mexico really like the bears," he says.

About half of his business comes from custom orders, he says. The orders usually come with a general idea of what the customer wants, and then Dockery fills in the blanks. Sometimes a log will have a shape that begs for a particular design; other times Dockery starts with a few rough sketches and then lets the grain of the wood determine the actual shape.

"Finding a good log is usually the hardest part," Dockery says. He uses a lot of pine from eastern New Mexico because it is easy to work with, takes paint and varnish very well, and will last a long time. Occasionally, he uses locally grown elm, cedar, and mesquite.

The local mesquite is a pretty wood but doesn't grow very big in the Panhandle. Dockery says it's difficult to work with because it's a very hard wood and the dust will make you sick. He found out the latter the hard way. There's been a lot of trial and error in learning how to make the wooden statues, he says.

One place that he has been able to get some pointers is at the annual chain-saw sculpting competition at the Albuquerque International Balloon Fiesta. One of only six artists invited to the competition, he has won second place the last two years. In 15 hours over three days, Dockery completed his sculpture of a Wizard of Oz-themed piece.

Although carving Dorothy returning to Kansas in a hot-air balloon was one of his most unusual pieces, it is not the most unique. He's done a 14-foot-tall replica of the Statue of Liberty, several eagles, wooden Indians, gnomes, a beagle, fireplace mantles, furniture, and headstones. "The grave markers won't last forever, but they make a nice temporary headstone," Dockery says.

One of his favorite pieces, an eagle taking flight, was commissioned by a woman in South Texas for her son in Alaska. She liked it so much that she ordered a second one for her other son in the Houston area. "They're not exactly the same," Dockery says, "because no two logs are ever the same."

He also goes on-site to carve dead trees into monuments. A lot of times the tree was planted upon the birth of a child or some other event. The tree had special meaning, so the family wanted to keep it. He is currently working on ideas for a tree in an RV park in Kerrville. A dying cypress tree in front of the electric cooperative office in Levelland will soon become a sculpture of Ready Kilo-Watt. "Using a tree stump is not a bad way to go," he says. "At least then nobody can steal it."

About a 55-mile drive northwest of Lubbock, Whitharral has a population of 175, so Cam Dockery and Bearly Making It aren't hard to find. He doesn't usually have more than a couple of sculptures around the barn, unless he is working on a large order, but he's always willing to show his photo album of past jobs. To talk to Dockery about a custom job, call 806/778-9353 or e-mail cdockery77@aol.com.