The slipstream of leather, cashmere, faux fur, and designer logos could be seen from space: Stephen is making the scene, people; cut a swath 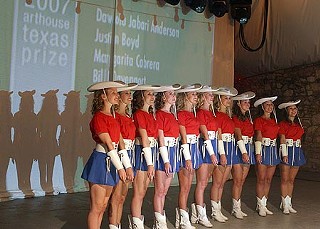 THE 'REAL' TEXAS PRIZE The first Arthouse Texas Prize Party two years ago was one of the best parties we'd ever been to – one of those events imbued with such magic that the details remain etched in the memory. So having to wait for the second Texas Prize Party (the prize of $30,000 is given every two years to a deserving artist) was positively torturous. But with a theme of Texas Flash and Texas Trash – a concept that we understand very well – we shimmied into our glittering gold Versace shirt, black velvet trousers, and cowboy boots and strapped ourself in for a wild ride. Skipping the ornate hotel ballrooms, Arthouse had Stubb's decked out like a cross between a deb ball and a livestock show (same thing, right?). Things progressed as expected – the women were beautiful, the cocktails plentiful, and the prize presentation was made. Then, seemingly out of every crack and crevice came the goddamn Kilgore Rangerettes, resplendent in the red, white, and blue uniforms. As they marched across the stage and performed their routines, their exacting precision was absolutely dazzling. With the bull-riding machine, fairground games, burros carrying around baskets of cold beer, and Heybale! keeping the folks dancing, the Texas pageantry was in full swing. Pure magic. Again. Arthouse just knocks 'em dead.

GOT TO OCTO Like a scene from Dancer From the Dance, with bodies swaying to the music in the twilight overlooking the water, the 12th annual Octo Tea Dance at the new Oasis complex was undoubtedly the best and biggest Octo Tea Dance ever. The new venue (replacing the structure that burned last year) was architecturally confusing but spacious, well-laid-out, and much higher above the lake than the original building. But that's only the setting, of course. It was the energy of the crowd that made the place come alive (thanks to cocktails from Paula's Texas Orange Liqueur). From college boys to the boys for whom college is a distant memory, from the lipstick lesbians to the lesbians who don't know what lipstick is, Octo was a rare opportunity to see how large the gay community in Austin is. The most amazing sight (well, to us anyway) was the array of designer sunglasses being worn. Guccis, Diors, D&Gs, and Pradas were everywhere ... and those are just the ones on our head.