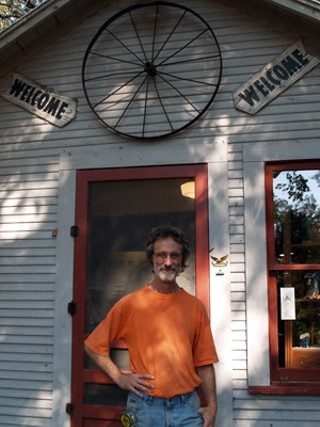 A potter's way of life (Photo by Gerald E. McLeod)

The Old Farmhouse Pottery, outside of Maydelle, is easy to find, but it's a long, scenic drive to get there. Hidden away on a country lane between Rusk and Palestine, David Hendley's studio is full of unique clay creations that have been attracting buyers to the Piney Woods since 1991.

Hendley's bowls, plates, jars, vases, and other items come in all sizes and shapes that are aesthetically pleasing as well as functional. He relies on a wide palette of earth tones with a heavy emphasis on blues and reddish browns. Each piece is cooked in a wood-fired kiln that gives the pottery a subtle uniqueness. Perhaps his signature piece is a square "wavy" tower, bent at the middle, with tiny arms. The design, which is incorporated into lamps and vases, is indicative of Hendley's playfully laid-back attitude.

"We have the same business model that Krispy Kreme Doughnuts used to have," Hendley says. "Get a location that's out where rents are cheap, and people will make the trip."

Hendley discovered the potter's wheel while studying psychology at Trinity University in San Antonio. After graduation, he continued his art education at the University of North Texas and Texas Woman's University in Denton. For seven years during the 1970s, he had a studio in Dallas.

"I didn't know back then how wonderful we had it," Hendley says. "My rent was $20 a month." He and his wife, Karen, made a dream come true when they bought the old farmhouse in East Texas that is now his studio.

In 1984 the couple sold their Dallas home and moved with their two kids to the property. He says he retired for six years while they built a new house. "Everybody should be able to pursue a dream like that," Hendley says. "But things were a lot cheaper in the Eighties."

When he got back into the pottery business, Hendley traveled to the art fairs around Texas for a few years. The experience helped him build a clientele of customers, but it was comparable to having a storefront in a high-rent strip mall. "I have more customers now from Dallas," he says, "than I did when I had a studio in Dallas."

You will only find Hendley at three art fairs during the year, all of them run by other artists. He always joins his friend and Cedar Valley College professor Randy Brodnax for a Christmas pottery show in the Sons of Hermann Hall in Dallas. Not too far away from his home, the Edom Festival of the Arts has become very well-established among art collectors.

When his friends Terry and Dee Buck suggested starting the Texas Clay Festival in Gruene, Hendley thought they were nuts. A festival of just potters seemed like a poor business model. "I thought it would be fun to hang with other potters," he says, "but didn't think I would sell anything."

The opposite turned out to be the case, and the Clay Festival is in its 15th year. As one of the few pottery shows where the artisans explain their craft, the festival attracts visitors from around the state. "A lot of people are coming for the demonstrations," he says. "It's a very pottery-educated crowd."

Old Farmhouse Pottery is one mile east of Maydelle, 125 miles southeast of Dallas, and 175 miles north of Houston. The pottery shop opens Thursday through Monday, 1 to 5pm. But he's usually around the shop, so give him a call if you're in the area at 903/795-3779, or see his work at www.farmpots.com.

The Hendleys will be holding their annual open house on Nov. 17 and 18, 10am to 5pm. Karen will be serving her famous homemade cookies and hot cider. There will also be live music on the porch.

Randy Brodnax's Christmas show will be held in Dallas Dec. 7-9. For information call 214/232-0980. The Edom Festival of the Arts is held the third weekend in October in Edom.