Dr. Joe Smith's eye-catching sculptures have been attracting folks to Caldwell for decades 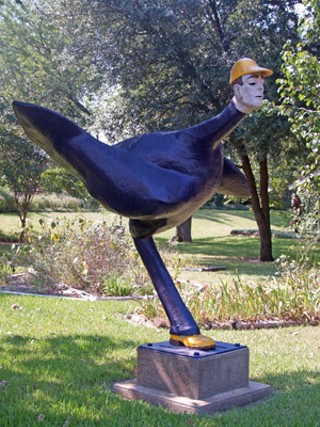 Dr. Joe Carlyle Smith's sculptures have been an attraction on the west side of Texas State Highway 21 in Caldwell for more than 30 years. The eye-catching art pieces turn the retired doctor's lawn into a garden of shapes and colors gone wild.

Although the sculpture garden beside the highway is more of an artist's studio than public park, Smith doesn't mind visitors stopping and getting a closer look. In fact, he might join you for an impromptu guided tour, explaining the philosophy behind each piece. "To be a good artist you have to have a good philosophy developed by human interaction," the former general practitioner says. "The work should say something."

In 1953 Smith and his wife, Mollie, moved to Caldwell, where he took over the practice of a country doctor who worked out of a black bag. The town built its first hospital across the street from Smith's house. "I could literally be out the door and in ER in a matter of seconds," he says.

Smith turned to art as both a release and an expression of the human condition that he worked with every day. His artistic expression took a prolific turn when he added a darkroom to his bathroom. His son J. Griffis Smith is a photographer for Texas Highways magazine. "I guess he got it from me," he says with a laugh.

From manipulating shapes and colors in his home photo lab, Smith moved on to painting, making jewelry and furniture, and ultimately the sculptures that decorate his yard. "I'm a 'constructionist,'" he says. "I use whatever materials are available."

He once made a sculpture out of the steel bars removed from a demolished retaining wall. "My work is pretty primitive because I don't use standard materials," he says modestly.

Beginning with a set of Time-Life books, Smith began a lifetime of studying art history. "My work is very derivative of other artists' work," he says. "Like most artists, I find a style and do variations." He has a long list of artists, from turn-of-the-century French painters to modern sculptors, whose work he admires.

One of the most memorable pieces in Smith's yard of art is of a man's head on a goose's body standing on one leg called Impossible Dream. It was originally a parade float made of chicken wire stuffed with tissue to look like feathers. Smith's daughter rode it as Mother Goose. "It was in the way, so I covered it with car-body metal and smoothed it out with Bondo," he says. "Unfortunately, the Bondo didn't hold up very well." The piece is now covered in fiberglass and automobile paint.

The 10-foot-tall goose sculpture has "an impossible face," Smith says. "It's just a face. I don't have the eye-to-hand coordination to be a portraitist." Yet many of his pieces include faces that capture human emotions.

At 86 years old, Smith has slowed down since he made his first outdoor sculpture 40 years ago. He still works at expressing his visions in Styrofoam and other easy-to-manipulate materials. He looks at his 70 or so large sculptures and countless smaller works with the fondness of a creator who doesn't take life too seriously. His work is on display around Caldwell, on the Texas A&M University campus, and in the A&M medical school in College Station.

The Crucifix, one piece that he is most proud of, sits on a small hill behind the house. Made of concrete bound in thick wire, the artwork is the Baptist preacher's son's statement that religion should be used day-to-day rather than worshiped as a static body.

Smith's sculpture garden is just north of the railroad underpass at the corner of Stone Street and Texas 21 West. Group tours can be arranged through the Caldwell Chamber of Commerce (979/567-3218). Other works by Smith can be seen in Caldwell at the McDonald's restaurant; the Civic Center, 103 Presidential Corridor; and at the Woodson Memorial Library, which once housed his medical office, at 704 TX 21. In College Station, his work can also be seen at TAMU Horticultural Gardens.