Grand Saline is the saltiest town in Texas, and it has the Salt Palace to prove it 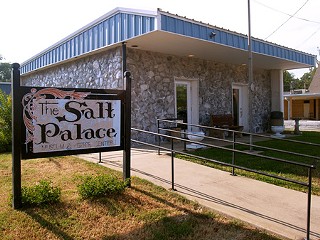 Salt of the earth (Photo by Gerald E. McLeod)

Grand Saline is the saltiest town in Texas, and it has the Salt Palace to prove it. Calling the visitors' center a palace may be stretching it, but the Northeast Texas town is literally sitting on a mountain of salt.

A 20,000-foot-tall pile of pure sodium sits 400 feet under the fertile soil south of town. Left by an ancient sea 250 million years ago, it is one of the largest and highest-quality salt deposits in the U.S. Officials estimate that it could supply the entire world's need for salt for 20,000 years.

Although they never dug deep enough to hit the mother lode, Native Americans knew about the saltwater marshes in the area. When the Cherokee Nation moved into the area, they harvested the mineral by evaporating the water. Today the site is a bird-watching sanctuary south of U.S. 80 on FM 857, says Mary Martin at the Chamber of Commerce's visitors' center.

There has been a salt factory in Grand Saline since the Republic of Texas army forced the Indians out in 1839. During the Civil War, the plant supplied the Confederacy with 500 pounds a day of the precious resource. By 1920, Morton Salt took over the operation.

Eleven years after they arrived, Morton drilled two shafts and found the hidden mountain. On Monday mornings, when the residents of Grand Saline say they're "off to the salt mines," they're not kidding. The mine, a mile south of town off TX 110, employs hundreds and helps make Texas the No. 2 salt-producing state.

Safety regulations during the 1960s put an end to the public tours of the plant. If you want to learn about salt mining in Grand Saline, you'll have to visit the Salt Palace. An exhibition in the small museum explains the history of salt, how the mining is done, and shows an advertisement video for Morton Salt.

Proud of "the Salt Capital of Texas" title, the Chamber of Commerce hands out free thimble-sized blue boxes of Morton Salt. The town is so delighted with its biggest industry that they built the Salt Palace to tell visitors the story.

The first Salt Palace was a solid salt structure patterned after the Alamo. It didn't last too long after it was built for the state's centennial celebration in 1936. A second salt structure met the same fate as the first after a few years of East Texas rain.

On the third attempt at a Salt Palace, the town seems to have figured out what was happening to the other buildings. The visitors' center is a small, squat building with an aluminum overhang that shields the salt-block veneer from melting. "We just resurfaced it this past summer," Martin says. "It's held up pretty well over the last 12 years."

Other than its obvious drawback, rock salt makes a pretty strong building block. From a distance, two exterior walls of the visitors' center look like ordinary, gray rock. Up close, veins of translucent quartz give it a sparkle. It is all held together with a special salt/mortar mixture.

You might not be able to lick City Hall, but you can lick the Chamber of Commerce building. And nearly everyone does, Martin says. Unlike table salt, the taste of the real thing is overwhelmingly strong. "It's very concentrated," Martin says of the wall. "A little goes a long way."

Besides the friendly Martin handing out free information about the area and salt mining, the Salt Palace's museum tells the history of northern Van Zandt County. World-famous aviator Wiley Post was born on a farm near Grand Saline. Post set two world records for flights around the world before he was killed in a plane crash with Will Rogers in 1935. Martin says a local lady has been collecting Wiley Post memorabilia for years and put together the display that includes newspaper clippings, photographs, and a model of Post's airplane, the Winnie Mae.