Our social butterfly, your Style Avatar, keeps it indoors and parks it in front of the tube for a bit 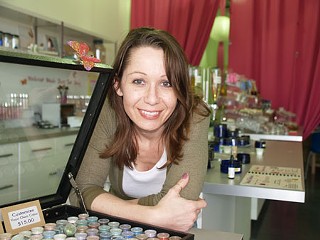 Owner LoriMarie mixes her own organic cosmetics at Myka (www.mykastore.com) and trains make-up artists, too, at her new Slaughter Lane store. (Photo by Seabrook Jones)

DEEPLY DVD We've sunken deeply into movie-watching lately, practically absorbing DVDs like we were some sort of giant sponge. And we don't know why; we love having all our favorite old movies at our fingertips but loathe the collecting and storing. It's some sort of chemical imbalance, we're sure. Some recent acquisitions over the past few months include a number of entries in what we call the Kweenie Klassix Hall of Fame. A Summer Place has always held a special place among the Kweenie Klassix -- first off, that Constance Ford plays one deeply disturbed dame. And Sandra Dee and Troy Donahue? Forget about it. Just give in and suspend all logic. Fave moment? The scene with the "purity" test. Another fave KK is The Bad Seed. The new DVD edition has cool extras, with a great commentary by Patty McCormack. Fave moment? Any of them that include the late, great Eileen Heckart. Leave Her to Heaven has breathtaking scenery, particularly that of the scrumptious Gene Tierney, who plays the most beautifully dressed murderess, Ellen, who just loves too much and lets nothing stand in her way. Fave moment? The perfectly accessorized Ellen casually slipping on her cat-eye sunglasses right before she drowns her stepson. Leave Her to Heaven is The Bad Seed with fully developed breasts. We wanted to like the Mommie Dearest Hollywood Royalty Edition more than we did. We wanted better extras. John Waters' commentary was just all right, but they should have looked closely at the Valley of the Dolls special edition to see how it should be done. Speaking of Joan, we hear that Warner Bros. is issuing a new Joan Crawford DVD collection that will include the delectably abysmal Flamingo Road in which Joan plays the world's oldest living harem girl who gets tangled up with the fabulously evil Sydney Greenstreet. Fave moment: when sister-woman smacks Greenstreet across the face with the telephone. Also in the new collection will be Joan's 1953 Torch Song. Omigod. If you haven't seen it, prepare to scream. Her Butchness plays Jenny Stewart, an aging but still, uh, "beautiful," um, "entertainer." She is a Broadway gorgon along the lines of Helen Lawson, and Crawford is Joan to the bone as she tramples over everyone in her path. Favorite moment? Joan. In blackface. Performing "Two-Faced Woman." Don't be afraid to scream. What we wish they'd have in that collection is Harriet Craig, but that's from Columbia, not Warner. And speaking of John Waters, we just got Female Trouble, our hands-down favorite of Waters' early work. So ill and so funny. We loved Divine long before we had our disastrous opportunity to dress her. With Rock Hudson and Elizabeth Taylor at their peaks of beauty, the two-disc special edition of 1956's Giant is a buffet of treats for fans, of which we count ourself. And we bought Stanley Kubrick's Barry Lyndon primarily because Marisa Berenson is so gorgeous. We've mentioned Kinky Boots before. Just buy it. That's all. And now, specious as this sounds, we have to let you know that we are not any kind of dyed-in-the-wool Barbra Streisand devotee ... even though we did buy Funny Girl and A Star Is Born. Funny Girl is fun in that overblown 1960s we-don't-give-a-damn-about-historic-detail sort of way. Babs was pretty fresh and engaging. But by the time A Star Is Born rolls around, bay-bee, is Babs unbearable or what? Simply awful, and Kris Kristofferson looks embarrassed throughout the entire movie. And we're embarrassed, too -- for spending money on it. Primarily we wanted it to round out the triple-play of A Star Is Borns -- the 1937 version with Janet Gaynor and hunky Fredric March and Judy Garland's 1954 version, but Babs' is our least favorite version. And though it grieves us to mention yet another hackneyed gay icon in the same column, we've already talked about Diana Ross' excruciating Mahogany -- a Kweenie Klassik of the first order. While it was time for it to come out on DVD, its producers totally overlooked its camp value, and the extras consist of a gallery of poor-quality photos. Where was the Mahogany drinking game, dammit, where you have to do a shot every time Diana Ross grits her teeth and scrunches up her eyes? Where was the follow-the-goddamn-bouncing-ball showing us the words to that infernal song? Where was the pin-the-tail-on-Diana game? OK, we'll try and get over it. Love and kittens.