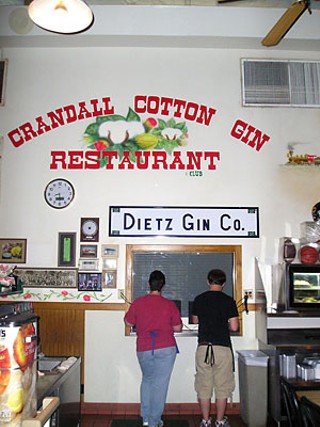 Crandall Cotton Gin Restaurant isn't your ordinary roadside diner. The menu is built on the usual Texas fare of chicken-fried steak, but from there it branches off in many directions.

"If you can't find something you like on my menu," says Larry Potter, the executive chef and general manager, "then you're just not very hungry."

Built in a former cotton gin, the cavernous, gray tin building retains the functional architecture of the day. Which adds to the fun of a visit. Some of the belts and wheels still hang from the ceiling, and big pipes protrude from the floor. On the walls are yellowed photographs of the building and the people who filled it when cotton was king.

One day Potter met a woman in the hallway off the main dining room staring up at a photograph of the gin workers. "She must have been every bit of 90," he says. When he looked into her face, she had a tear rolling down her cheek.

"I asked if there was anything wrong," he says. She pointed at a young man in the small black-and-white print. "That's my husband," she said.

"That's the best part of my job," Potter says. "Hearing all the interesting stories and history that people associate with this building."

A little more than 30 miles southeast of Dallas, Crandall sprouted as a shipping point for area farmers when the railroad was built in 1880. The blackland prairie was ideal for growing the white fiber, and as early as 1884 the town had a cotton gin. "This used to be the richest cotton fields in the U.S.," Potter says. The row crops were replaced by St. Augustine and backyard pools as Crandall is a bedroom community for its northern neighbor.

The Dietz Gin produced its last bale of cotton in Crandall in 1986. Dewight Haddock purchased the building in 1993, and after three years of removing machinery, cleaning, and remodeling, the restaurant was open for business. On the walls are murals depicting the history of the region done by Larry Karns, an artist out of Athens, Texas.

A native of the Dallas-Fort Worth area, Potter came to work for the restaurant a month after it opened. After 11 years of greeting customers, he has become as popular as the chicken-fried chicken. The second-best thing about his job is that he has control over the menu, and he likes to have fun with it.

Unlike many roadside diners where everything is fried, the Cotton Gin offers comfort food cooked all sorts of ways. "We try to give our customers a broad choice," Potter says. The daily specials might include chicken and dumplings, liver and onions, breaded catfish, and lemon-peppered baked fish.

Chicken-fried steak might be the most popular item on the menu, but seafood is Potter's personal favorite. He routinely dines on the grilled halibut and a baked potato. "Now that's eating," he says with a big smile.

If there is a secret to attracting a loyal clientele, Potter says it must be putting in the extra effort. All of his steaks, even the breaded varieties, come from the Chicago Stockyards where the high-end steak houses get their meats. The chicken is fresh from local producers, never frozen. Rolls, cobblers, and pies are all made on-site.

The food is so good that a regional motorcycle magazine recognized the Cotton Gin as one of the best places in the state to eat breakfast – the only restaurant outside of the Hill Country that made the list.

"We're very biker friendly," Potter says with a laugh. Every weekend he sees a parade of motorcycles headed out of Dallas for a ride in the country. "We get 'em for breakfast," he says, "and then we get 'em for supper on their way home."

The Crandall Cotton Gin Restaurant is on the south side of U.S. 75 at the Crandall exit. Breakfast, lunch, and dinner are served Tuesday through Thursday, 7am to 9pm; Friday and Saturday, 7am to 10pm; and Sunday 7am to 8pm. They're closed on Mondays. To find out the special of the day, call 972/427-3883.