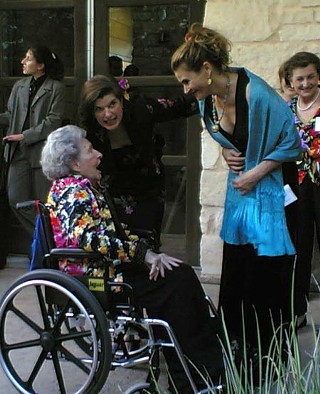 YES, VIRGINIA… Well, if our Austin Chronicle Food editor cohort Virginia Wood can spill her guts – no pun intended – about having had weight-loss surgery, then Your Style Avatar guesses he can, too. As if it weren't already obvious to anyone who has seen us in the past few months, we've undergone quite the transformation recently, dropping 10 inches off of our still-well-padded frame. We took a trip to Mexico in January and had the adjustable gastric-band surgery. The "procedure" (as we like to call it) took three hours, and the entire trip only two days. We like to think that, aside from a deplorable genetic predisposition, it was all about comfort food. Comfort food. Such a nice term for an ugly syndrome – and the bigger we got, the more comfort we needed. Even making the decision to go from unpleasantly plump and riddled with health problems to something more manageable was a challenge; the specter of good health and a slim figure can be profoundly disturbing to someone who has hidden behind a wall of fat, keeping the world at bay. Needless to say, there would be psychological ramifications as well. Fortunately, after an initial period of difficulty, the results came quickly. After a series of adjustments in tightness to the band, we got to that sweet spot where the pounds were dropping so fast you could almost hear them. ("What was that sound?" "Probably just another dress size.") Soon we were into clothes in our closet that we'd outgrown in recent years – even the ones we'd held on to for sentimental reasons without any hope of ever wearing again. The biggest accomplishment recently was being able to walk into virtually any clothing store and fit into the clothes. Fuckin' miraculous. No more plus-size back-of-the-bus for me. No more nightmarish hit-or-miss shopping on the Internet ("Oh, look! They have Christmas-themed sweaters in 6X!") or trying to find something stylish in the Big & Tall catalog ("Hmmm, would we prefer the black or white golf shirt to go with the garishly colored Bill Cosby-ish sweater?). Our health has made rapid advances toward respectability; the peculiar processes of eating, which someone with this band learns, have become second nature. There is so much more activity, energy, and motivation; it's as if we downloaded an entirely different operating system. Talk about a lifesaver … literally.

TAILGATIN' FOR LADY BIRD Every time we've seen Lady Bird Johnson in person over the last few years, it has occurred to us that it might be the last time. We were fortunate to see her on what would be her last public appearance, at the Lady Bird Johnson Wildflower Center Gala in May. The effects of her stroke had left her unable to close her mouth, but her eyes were alive and bright and didn't miss a trick, and we could see her eyes travel up and down our dramatic outfit as we greeted her. When we heard she'd died, we were not surprised but heartbroken nonetheless. We wanted to watch the funeral cortege but didn't want to cope with parking Downtown, so we drove out past Oak Hill on 290, and we pulled into a Texaco station for a Diet Dr Pepper. The station seemed busy for 9am on a Sunday morning, and it became clear that it was a gathering spot. Hell, we thought, there's food, drink, gas, parking, bathrooms, and shade; the manager told us, sure, we could stay there. He'd evidently been gracious to many people, and on short order; the place was teeming with activity as folks arrived to watch Lady Bird pass by. Pickup trucks arrived, and families arranged coolers and snacks – tailgatin' for Lady Bird. Signs were held, and flags were waved. Then it was over. The hearse had passed, and the limos carrying the Johnson family passed, with the Johnsons sweetly waving to the well-wishers, and we drove home, happy for having known this great lady. The odd thing was when we were dressing for the outing, we'd worn an old but elegant black silk shirt that we have loved for years. We realized later that it was the same shirt we'd worn to Jackie Kennedy's funeral in 1994 in New York. It's now the First Lady Memorial Shirt.

IMMORTALIZED We practically peed on ourself when we saw our name mentioned in Pamela Des Barres' delicious new tell-all about groupies called Let's Spend the Night Together. In a chapter about our illustrious sister, Margaret, the glorious Mme. Des Barres says, "I've made lots of friends, including Margaret's flamboyant younger brother, Stephen, who writes the uninhibited style column for The Austin Chronicle." Uninhibited? I'm blushing.