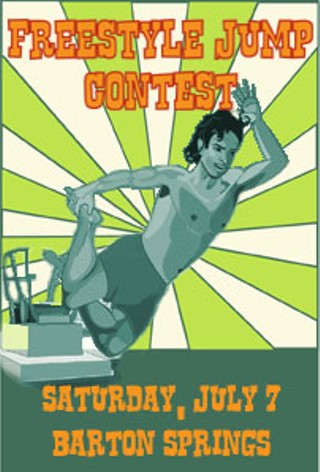 Barton Springs is without a doubt one of Austin’s most beloved and memorable landmarks; Beloved because for centuries it has been the coolest place in Austin (in recent years just barely edging out places like Emo’s and Kenichi); and memorable for anyone who has ever been in the public, open-air showers at Barton Springs and seen the shriveled twigs and berries of some dangerously over-tanned, assless nonagenarian. Before you get too cocky about your own package you may want to take a flying leap into the Springs yourself and see if you don’t come up screaming like a schoolgirl and rocking an equivalent amount of Johnson. Barton Springs doesn’t just cause shrinkage, it causes your boys to flee deep into some warm cranny of your ribcage where they’ll secretly devise an exit strategy that involves Bikram Yoga and a blowtorch. Similarly, if you’re one of those women who have been blessed with large, sensuous nipples, you would do well to lash them down with some Kevlar patches and 100 mph tape before entering BS for the first time. Otherwise, you might end up with bullet holes in your bikini. Barton Springs is only cool on the outside – say on a towel on the hillside in the shade. The pool itself however, is MF’n cold. It’s the kind of water where the people who’ve already made the plunge say (through chattering teeth and blue lips), “It’s fine once you get used to it,” which is the same thing the people in hell would say were you to cautiously peer in and ask if it’s as hot as it looks down there. Misery loves company. Never trust the miserable. People who stay in the water at Barton Springs for more than a few minutes are either A) dead, B) training for a swim across the British Channel, or C) wearing the wrong swimwear and too embarrassed to get out. Remember the bullet holes? You might also want to think twice about that bright yellow Speedo slingshot that fits like a sausage casing at the tanning salon. Something dark and baggy should do just fine. Whatever you wear, you will want to enter the water quickly – almost as fast as the speed at which you exit it. That slow, inch-at-a-time acclimation process doesn’t really get it at Barton Springs unless you’re willing to spend an equal amount of time belting out Mozart’s Popoli di Tessaglia. The best way to get into Barton Springs is off the diving board – ideally with the kind of high, graceful acrobatic maneuver you would like to precede a sudden heart attack. If you want some good examples of how to do that, set your alarm clock early for this Saturday when Independence Brewing Co. hosts the second annual Freestyle Jump Contest for Barton Springs. Jumpers from Austin and beyond will compete for the right to have a photograph of their best jump featured on the label of Independence’s Freestyle Wheat Beer. Registration is $25 and runs from 7-8:15am. The contest begins at 8:30am. Jumps will be judged on “showmanship and freestyle-inspired creativity.” If you plan on competing, try not to shriek until you’re under the water, and don’t worry about keeping your swimsuit clean. Nothing’s coming out of that pucker.