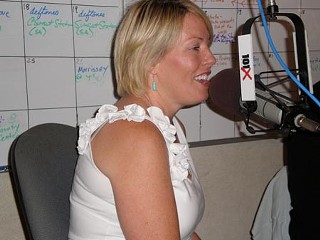 My co-guest, Kayt Jourdanson of Matson Belle, in the 101X studio for Ray Seggern's cooler-than-cool Chillville. (Photo By Jason Montemayor)

THE BIG CHILL How exciting that we received an invitation from 101X's charming Ray Seggern to be a guest on his Sunday morning show, Chillville. He contacted us through our MySpace page, professing admiration, and we were therefore putty in his hands. Though we said we'd have to clear it with our agent, we were already planning our outfit. Arrangements were made through the show's producer, Monty (Full Monty, if you're nasty), and Ray sent us a list of topics that we could touch on. Among his requests was that we familiarize ourself with the Dallas phenomenon known as the Polyphonic Spree, since they'd be performing that night and might call in to the show. We were in a tizzy, and after six panicky hours of Polyphonic immersion therapy, we were an expert on them, committing to memory the details of their costumes and performances. We'd observed that the lead singer sounded like the love child of Neil Young and Michael Stipe and that some of the music was so relentlessly happy that it sounded like it belonged in a Broadway musical geared toward special-needs children. We noted that Entertainment Weekly had ranked Polyphonic Spree's album as second-worst of 2004, behind William Hung's travesty. We knew all about the raging flame-wars about whether Polyphonic Spree was a cult or not. By 3:30am, we were ready to write a dissertation on them. Getting up at the crack of dawn (well, 9am anyway) to be at the studio by 10, we were late; having sustained a painful leg injury earlier in the week, we fortified ourself with Vicodin and drastically underestimated the many factors involved in choosing just the right outfit to be on the radio. The outfit had to send the right message, even if no one could see it. Eventually deciding on all black (it was after all, a bright, sunny, summery Sunday morning), we leapt into our car, undoubtedly looking like a plus-size Batgirl, and flew down the freeway rehearsing our prescripted bons mots ("Beth Ditto blames gay designers for keeping women at size zero. Her nude photo on the cover of NME proves that she has successfully fought back."). Having consented to meet Ray at the back entrance to the studio (but only after he convinced us that all the most important celebrities prefer that), we were ushered in and offered something to drink. We'd heard that Lindsay Lohan started her mornings with Vicodin and Diet Pepsi (the breakfast of champions), so we followed suit. Ray introduced us on the air, and we had a brief exchange about my history with The Austin Chronicle. We glanced at our notes and were all ready to launch into our dishy and never-before-revealed-in-public story about D'arcy Wretzky of the Smashing Pumpkins when we realized that Ray was slowly pushing up the gain on the music – sort of like they do at the Academy Awards when someone's going on too long. O-O-OK, so we'd save the gossip for later. Soon, one of the members of Polyphonic Spree did call in, and Ray interviewed him. We'd warmed up all our patter about PS and were ready to regurgitate our observations about them. Ray asked us to comment on the clothing worn by PS, and we mentioned the fashion extremes of going from white robes to black Special Weapons And Tactics team uniforms. Then we moved on, folding up our notes and asking ourselves, "This was what we stayed up all night studying for?" We took many breaks with Ray, laughing and gossiping over cigarettes on the patio, sharing stories, and catching up on old friends. Kayt Jourdanson of Matson Belle joined us at the station. We hit it off famously, and she spoke on the air about the new CD she was working on, but mainly we chattered among ourselves while Ray did his thing. The show was over soon enough. We all bade our goodbyes (and dropped our largely unused notes in the trash on the way out). OK, so now we understand what the role of a radio guest is: It's not about entertaining the listeners; it's about entertaining the host while he entertains the listeners. Now we wonder when our application to curate the Polyphonic Spree Museum will be processed.