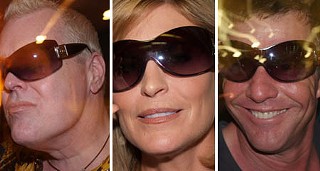 Working their way back to me, babe – my fake D&G sunglasses make their way from my face to Judy Maggio's to Dennis Quaid's.

DENNIS, ANYONE? Friday night's Dennis Quaid Charity Fashion Show at the Omni was pretty glam, at least from our point of view. But while it was ostensibly about clothes, it seemed like it was more about our sunglasses – our cheap $6 Dolce & Gabbana knockoffs from Mexico that were irresistible to us primarily because they were the largest sunglasses we'd ever seen. Running into pal Judy Maggio backstage (she and Ron Oliveira emceed), she said, "Oohhh, let me wear your sunglasses onstage!" So we forked them over, thus depriving ourselves an entrance with them on, but, hell, we thought of it as doing our civic duty. Then at the swank party at the Belmont afterward, Dennis said, "OK, I have to try those things on," so we handed them over, and he wore them for a good while. The show itself was predictably gorgeous: Ungaro, Vivienne Westwood, Ted Baker, and Nicole Miller clothes from Estilo on some of Austin's best models (hello, Eva, Katy, Feliz, and Todd!). This glam annual event (with 1,000 guests this year) is a favorite, but we wanted the pre- and post-show entertainment to be of the same caliber as the show itself. It wasn't. But it was a kickass show anyway, and our favorite moment was when Dennis first made his entrance on the runway and we stood up to applaud … and he leaned over from the stage and threw his arms around us and gave us a big ol' kiss. But what he really did was whisper, "Help, I can't get this microphone turned on!"

SUPERESTRELLA May we gush for a moment? We have just returned from seeing Zach Scott's production of Jesus Christ Superstar, repackaged as the bilingual Jesucristo Superestrella. We've seen JCS many, many times in the past and have loved the music ever since our minister/professor father brought the album home when we were a little Donny Osmond-like yard ape wearing bell-bottoms and vests with fringe to the floor. We could perform every role (but of course preferred playing Mary Magdalene) and thought the music was wonderful. We've seen a number of fairly lame productions of JCS over the years and some fairly good ones (interestingly enough, Zach Scott had produced a fairly tame version of JCS in 1975, the year we arrived at the theatre). But nothing we've seen can compare to the incandescence of this production. Damn, Dave Steakley is brilliant. We loved the vendors in the temple selling everything from drugs to flesh to Louis Vuitton and Chanel knockoffs, Pontius Pilate being portrayed as the president, the 50 pieces of silver dropping from the rafters, the state troopers hauling Jesus away, and the brides of Christ in their quinceañera dresses against the blood-red set – sheer fabulousness. Exceptional cast, particularly Joseph Melendez as Jesus and John Pointer as Judas; frankly, we didn't really know who John was but are now a devoted fan of this composer, performer, and winner of multiple Austin Music Awards who also founded the a cappella group Schrödinger's Cat. He also performs at Cedar Street Courtyard on Mondays. You can find out more about him at www.johnpointer.com.

GET WELL SOON Our friend, legendary artist, and longtime scenester Micael Priest has had a heart attack but seems to be recovering well. We go back a long way with Micael. He has a fabulous historic photo of the two of us at some Mardi Gras event at the Armadillo World Headquarters circa 1975: We are dressed as an alien nurse with a white uniform, wraparound sunglasses, and antennae, and he is dressed as a Sixties Hollywood glamour queen replete with red sequined gown and brunette showgirl wig (yes, we dressed him, if you must know). Sister Margaret was dressed as a shimmery golden fairy. Imagine. Micael, have a speedy recovery. We're not done with you yet. We have a platinum-blond Dolly Parton wig all warmed up with your name all over it.