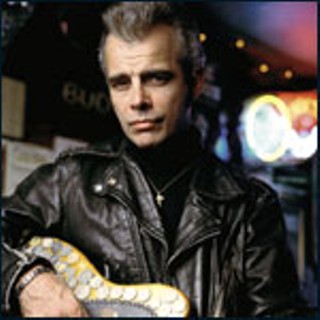 Nobody could argue that Dale Watson hasn't lived up to his end of the bargain when it comes to keeping Austin weird. He may not parade around in a chartreuse banana hammock, twirl flowers on Sixth Street, or spout paranoid vitriol on late night access TV, but Dale still has enough quirks to peak most people's freak meter. Unlike many of his country contemporaries, Dale brings it old skool 24/7. He rocks a Jethro (that'd be Beverley Hillbillies and not Tull) style pompadour, the upkeep of which probably requires vintage hair products found only on eBay or maybe a dusty bottom shelf in the back of some bordertown farmacia. He tools around on a big, fat Indian motorcycle, an anachronistic steel Clydesdale that looks like it was hand-crafted out of pig iron and buffed to a pearly shine by a small town blacksmith from the 1950s. He wears vintage clothes (or maybe they just look vintage when he's wearing them) even when it's blistering hot or freezing cold and every song he sings sounds like classic country regardless of what style music he's singing. Most importantly, he never breaks character because he is the character. Unlike his idols, Watson wasn't born in a sharecropper's shack and he didn't spend time in San Quentin. He's a city boy born in Alabama and raised in the smoky stank of Pasadena, Texas, but, in the words of country legend David Allan Coe, "If that ain't country, it's a damn good joke." Watson may be a living caricature of a classic country singer, but he's definitely not a joke. Sure, he’s gone a little batshit crazy in recent years - and with good reason – but no one has ever doubted his sincerity. In fact, one of the things people love most about Dale Watson is that he can't be anything other than Dale Watson. That's a rare commodity in a time when most peoples' intellectual and moral compasses are spinning off the post. Dale’s compass is always true north, and that makes him something of a freak, but maybe a freak isn’t such a bad thing to be – especially not in Austin. As weird as he is, fundamentally Dale is a really nice guy who went through some really hard times and came out reasonably intact. He's the kind of stuff country music legends are made of, and if country music ever comes back in style, Dale will be carrying the standard. This Friday he'll be at the Continental Club celebrating the release of his latest CD, From the Cradle to the Grave, which features 10 songs written by Dale in three days at Johnny Cash’s cabin in the Mountains of Tennessee – a cabin owned by Johnny Knoxville. Weird? Yes, but weird is often how legends are made.