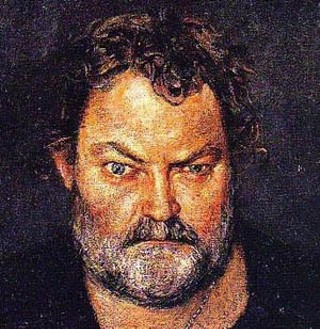 A photo of Thomas Woodruff's portrait of Rollo Banks. Rollo's giving the look that we affectionately dubbed "stink-eye." Anyone who was ever the recipient of this look never forgot it.

R.I.P. ROLLO My ex-brother-in-law – Michael Malone, aka Rollo Banks – died last week. He took his own life rather than submit to the indignities of rapidly deteriorating health. I completely understand. It was a pragmatic decision on his part: "Time to check out," he wrote in his note. Rollo and I were an odd couple indeed – as far apart as possible in thought, manner, experience, and point of view. Rollo and my sister, Margaret, met in Austin, fell in love, and were married in a matter of days. I made her wedding dress, and the ceremony took place in the rotunda of the Capitol. There was some trepidation about our meeting – he, the burly, gruff, world-famous tattoo artist and me, the recently rehabbed, over-the-top DJ/clothing designer. But I flew to Austin to meet him, and we hit it off famously. I thought he was a brilliant storyteller and the funniest person I'd ever met … and of course I wanted a tattoo from him. This was long before every 12-year-old girl had a tattoo showing above her thong in back, and his tattoos were pieces of art. When I showed my mother the tattoo, she gasped and said, "You know that's not going to come off!" I was very proud of it nonetheless. When I visited Rollo and Margaret in Hawaii, he gave me another, much larger tattoo of a dragon holding the pearl of wisdom that he free-handed on me – five hours a day for three days in a row. In 1987, he came to Seattle for an extended period and moved into my apartment with me. The night he arrived, I'd made macaroni & cheese with ham for dinner. He pointed at it in grunting approval and said, "You can make this sort of thing every night." At that point, our roles were established, and he became my husband-in-law. He paid me to do everything for him, and I was delighted to have him around. He drove me everywhere; we spent all our free time together, and we smoked like chimneys. When he found out we wore the same size shoe, he appropriated my shoes, thanking me for breaking them in for him. One night, after I'd had him in hysterics telling him about my first day at school (after a decade's absence), he exclaimed, "You're the coolest fag I ever met." In some other context, the statement might be deemed offensive, but coming from Rollo? It was the highest possible accolade. He meant it that way, and I was deeply flattered. It's my favorite Rollo story … at least of the kind I can print. Except for the time he visited my mother after her cancer treatments and sidled up to her, surreptitiously pressing a military Purple Heart into her hand and telling her, "This is for you – for courage beyond the call of duty in cheating the grim reaper." The last time I saw him, he looked like this larger-than-life mythical character with flowing white hair and beard – a cross between Zeus and Buddha, a prophet who spoke the wisdom of the ages. He'd mellowed into the Grand Old Man … a role he'd rehearsed for all his life.

SOCIAL-LITE You'd think I was some sort of lady of leisure – though I'm hardly a lady and definitely not of the leisure class. I started the week by judging the UT senior projects in apparel design. That was an all-day affair but one I really like… The next day was the Austin Country Club luncheon for Thought-ful House, a nonprofit dedicated to helping children with autism. Michelle Valles was there with Asleep at the Wheel's Ray Benson, along with Emily Robison and Martie Maguire of the Dixie Chicks… That was followed by beauty treatments at Origins at the Domain. The new men's skin-care line is excellent, and they have great gift baskets. But the treatments are nothing exclusive to me – they're available to all customers, and there's even an Origins happy hour… Up next was the Ballet Austin Guild's Women on Their Toes luncheon, benefiting Ballet Austin and honoring those who are deeply devoted to their community work. I was proud my friend Karen Landa was among the honorees… Friday was the UT fashion show, the glorious culmination of backbreaking work on the part of the students and faculty. It's always well worth it, and this year was no exception. There were some fabulous clothes… Saturday was the Art Ball, a trip to Manhattan via Laguna Gloria, with street vendors, mounted police, carriage rides, the Statue of Liberty, drinks, and silent auction in SoHo, dinner at Tavern on the Green, and dancing at Studio 54… See you at Zach Scott's Red Hot & Soul on Saturday!