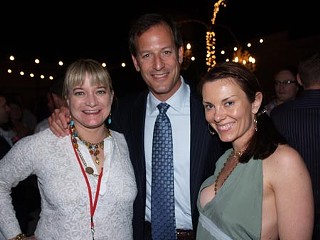 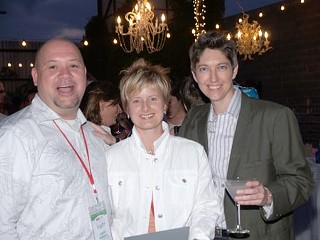 DOTDOTDOT Sharp-eyed spies saw Willem Dafoe shopping at Whole Foods. Seems he'll be starring with a very pregnant Julia Roberts in something called Fireflies in the Garden being filmed here and in Bastrop. Word from the set is that Roberts has her twin babies with her, since her husband, Danny Moder, is cinematographer. Crew members say that he is jovial and pleasant, and everyone loves him, but Julia keeps to herself and takes care of the infants when she's not on camera. In addition to the big names, Fireflies also stars Carrie-Anne Moss, Hayden Panettiere, Ryan Reynolds, and the way hot Ioan Gruffudd… aGLIFF's Bloom! fundraiser was a lively affair on a gorgeous night – every time I turned around, someone was handing me another Bloomtini, the signature drink, so by the time I left, I was almost knee-walking drunk and looking not at all like a fresh blossom. Fortunately, the paparazzi were otherwise engaged. The event raised lots of money, and some lucky ticket-holder went home with a new Mini Cooper… The Austin Museum of Art's Art Ball is Saturday at Laguna Gloria. It's one of my top five favorite annual events, and every year is better than the one before. Be there or be Cher.

CHITTERS We've spoken about Cheaters before, you and I, but it was a long time ago, and then it wasn't available in Austin after the first season. But a strange little cable channel called G4 has brought it back. My sister and I are devotees of it and refer to it as "Chitters," which is how many participants pronounce it. Cheaters is a reality series based out of Dallas, in which hapless young men and women who think they're being cheated on by their partners contact the show to have the Cheaters crew investigate to see if it's true. They follow the suspected cheater and videotape him until they have concrete evidence to show the "victim," who will be known henceforth as having been "kicked to the curb." When the cheater is in some compromising position, the Cheaters crew rushes the "victim" to a "staging area" (parking lot) and shows the evidence they've accumulated. The cheatee is then hustled over to where the cheater is, and a confrontation ensues, replete with cameras, burly goons, and violence. Originally, it was hosted by this blowhard named Tommy Grand (real name Tommy Habeeb), a man with an insinuating manner, spouting prurient questions. (He pretentiously answers the phone by barking, "Talk to me …" and speaks to a mysterious someone named Gomez.) He was especially irritating, and his episodes can be seen frequently. But he disappeared at some point and has been replaced by the equally smarmy Joey Greco, who can be so annoying that he even got stabbed in one episode. Cheaters is truly television at its finest.

CATWALKING By the time you read this, 50 UT students will have been in fashion hell for a number of days, frantically and furiously finishing the details on their senior projects. I think this will be the seventh year in a row that I, along with Blackmail's Gail Chovan, the Garden Room's Patty Hoffpauir, and two or three other local fashionistas, have judged the work of the UT apparel-design students. It's a very tough job in many ways, but the big payoff is seeing the clothes on the runway. We'll be viewing the collections close-up this week, and on Friday, we'll watch from the audience as the collections are presented at their big show, Friday, April 20, 8pm at the Erwin Center, preceded by an exposition at 6pm. Admission is free.