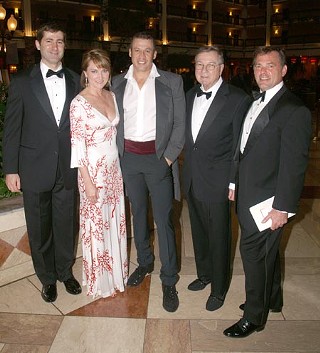 DEAR MR. KELSO I am neither "libertine" nor a "hippie." But you, sir, sounded like an idiot in your column last Sunday in the Statesman and underscored that with the fact that you can't tell the difference between The Austin Chronicle and South by Southwest.

HAIR SCARE It was a very swanky private concert, and everyone was beautifully dressed for the occasion. But I could hardly believe what I was seeing. I was trying to pay attention to the performer on the stage, but it just wasn't possible. In the row in front of me was a guy with lustrous black hair … and a lustrous black scalp to match. Leaning oh-so-discreetly forward, I saw that there was very little actual hair involved and that Mr. Misguided had applied what looked like black shoe polish to his scalp (and consequently, his shirt collar). Intrigued (and mortified) by what I'd seen, I did some research into the matter. Seems that there are products, such as Jerome Russell spray-on hair, called "hair thickeners" that can be sprayed on or rubbed into the scalp, coating the hair and thus "thickening" it. But its real job is to color the scalp so that the hair appears to be so thick that the scalp cannot be seen. A charming idea in theory, but in reality, it looks disgusting and greasy, and the sheen on the scalp reflects so much light that it makes it evident that there is very little hair, undermining the product's original purpose. Not to mention that, according to customer reviews online, it stains pillowcases and rubs off on shirts. Then there's a much more expensive product called Toppik, which is a powder that you shake onto your head (and clothes and countertop). It claims to be microfiber "hair" that bonds to your own hair and scalp (and comes in many colors), though customers have said that it can easily blow off during a strong wind and that it can turn green if it gets wet. Hmmm. Maybe not a great solution.

R-E-S-P-E-C-T A number of years ago, I worked as a bridal consultant at a large department store, helping engaged couples choose their china, crystal, and flatware patterns. One morning, the store director, a wretchedly unpleasant woman whom we'll call Carolyn Crumbcake, was bustling around being officious, and one of my co-workers said to her, "Good morning, Carolyn." The store director practically left skidmarks on the polished floor as she stopped in her tracks and whirled around and lashed out, "I'm not your friend Carolyn. My name is Mrs. Crumbcake, and you are to address me that way at all times." Those of us witnessing the incident were aghast at her hostility and imagined that she made her husband and children call her Mrs. Crumbcake as well. Though I hated her for being a vile, self-important troll, she was correct in insisting on formality. She definitely was not our friend; she was our boss, and addressing her formally helped establish her authority. I read a story recently in which an elderly woman asked her new doctor (we'll call her Dr. Helena Handbasket) if she could call her Helena. The doctor snapped back rudely that "Helena" was unacceptable and that the patient was to call her Dr. Handbasket. Though the manner in which the doctor replied was rude, asking to be called Dr. was not. It is a matter of respect. Speaking of respect, my mother, sister, and I were at a restaurant the other day, and the waitron piped up and said, "Are you guys ready to order?" Being the only "guy" at the table, I was confused about whom he was addressing. But of course, he was just trying to be casual and friendly, though neither my mother nor sister could be remotely mistaken for guys. It was too casual. But the phrase that irks me most is "No problem." Ordering food, purchasing goods, contracting for services, we're always told it's "No problem." Of course it's no problem – we're paying you money to do your job that you were hired for. A simple "thank you" or "you're welcome" will do.