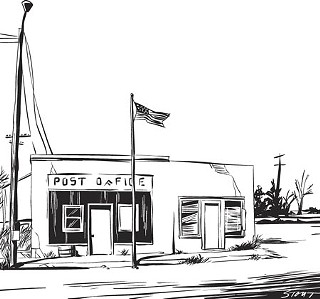 U.S. 62 in the Texas Panhandle is a two-lane road with no shoulders, a straight line on land as flat as the palm of God's hand – so flat, the skyline on all sides is below eye level and you have to look a bit down to see the horizon. The sky is contradictory, a clash of delicacy and enormity – as light a blue as can be, but massively so, all-enveloping. The flatness and the sky distort space. Without a farmhouse or a windmill to judge by, it's hard to tell one mile's distance from five. Miles of plowed fields, but there's more prairie grass than there used to be, less cultivation. Then you come upon an almost ghost town, one of hundreds across the West and Midwest.

Just a few homes, and some are empty. A historical marker announces, "Village of Cone – Named in 1903 for J.S. Cone – Town Once Had a School, Stores, and Churches." No trace of anything now but the school: red brick, two spacious wings, windows boarded. Engraved in stone over the front doors: "19 Cone 23." That sign speaks of pride and hope. They expected something here that never happened: a future.

Floydada, the county seat, is a few miles north of Cone. Like most county seats in such places, a proud, well-built courthouse in the center of town marks where the action used to be. Driving the four streets that branch off from the old courthouse, I counted 55 defunct stores. Founded in 1890, Floydada's official population is now said to be almost 4,000. Try and find them. Wherever they are, they're not downtown; they don't frequent these stores, and they don't go to the long-closed picture show. The people who built this place did not expect this to happen. They didn't found this town to see it all but dead by the time their grandchildren were old.

Continue north on State Road 207. There's a marker where the town of Della Plain has disappeared. Once, on this immense expanse, there stood "a school, church, post office, stores, and a newspaper." Now there are not even any ruins.

Up the road is what used to be a farmhouse. Just its corner remains, gray bent wood, beside a tilting gray privy. You see a lot of that in the middle of nowhere, all over the West and Midwest. Down in Terlingua on the Rio Grande, Spider Johnson and I sat on an old porch from which we could see what was left of several long-abandoned homes. "Toil and dreams," Spider said. "That's all that remains of their toil and dreams."

Further up 207 is Silverton, population 771. Another county seat, founded in 1892, its proud and all-but-empty courthouse was built in 1922. A Web site reports that in 1984, Silverton had 27 businesses. That was around the time when Dixie and I would drive 50-ish miles from Clarendon, across the Red River and up the Caprock to a cafe in Silverton that baked terrific pies. We'd have our pie and coffee and then enjoy the beautiful miles back to Dixie's. That cafe still stands, empty, like most of Silverton, where there are no longer 27 businesses. More like seven, if that. In 10 or 20 years there probably won't be anyone in Silverton or Floydada or many another sites of toil and dreams across the lands that commentators dismiss as "red states."

Between Silverton and Clarendon you see more ghost houses and ghost gas stations and a tiny ghost store, and every year they crumble a little more. Clarendon sits on four lanes of U.S. 287, the main highway from Dallas to Denver. The road and a junior college keep the town alive, but I counted 33 empty storefronts. The proud county courthouse hasn't been active for many years. Sonic, Pizza Hut, Lowe's, Dollar General, Best Western, and NAPA/Shell franchises siphon their profits somewhere far away from this town that once boasted two first-rate hotels for railroad men (one long empty, one now the site of a struggling local restaurant). Drive north of Clarendon on State Road 70 across the Salt Fork of the Red River to I-40. Not far south of I-40 is a marker documenting the first burial ground in "this area of Donley County, 1895." It was the town of Jericho. It had "a station of the Chicago Rock Island and Gulf Rail Line" in "about 1902." There was a town and a rail station here! They left no ruins, just graves. This road follows the route of the cattle drives on their way to Dodge City, Kan., in a time when people thought they were building a way of life that would prosper, in a place where they expected their kin to live for centuries.

In Paducah, miles south of Clarendon, I counted again: 44 empty storefronts and what looks like an abandoned factory, plus the old county courthouse, the dark picture show, and the hollow railroad hotel. Drive any direction for hundreds and hundreds of miles and you see the same thing. I know. I've driven every state in the West and Midwest these last several years, and everywhere you see the same thing: barely alive towns, ruins of toil, ruins of dreams, ruins of a future that people worked hard for – a future that never came.

A year ago November, I drove Kansas and Nebraska with Dave Johnson (no relation to Spider). We'd read that in many counties there were now fewer people than in the late 1800s, and we wanted to see for ourselves. Prairie grass swayed in the wind where there'd been farms. Town after town looked much like what I've described of the Texas Panhandle. The architecture is different but always the beautifully built and long-abandoned county courthouse and dozens of empty stores. In Kansas and Nebraska you don't see the diversity that you now see even in small Texas towns. Instead, you see mostly large white people of a certain ilk, the great- and great-great- and great-great-great-grandchildren of those who pioneered these plains. And many of these folks disliked me on sight.

I forget the name of the Kansas town where we stopped for lunch. It was like a scene in an old Western: We walk in; everybody looks; everybody stares as we take our seats. Dave, he could be a businessman from down the road (as, in fact, he is) – distinguished looking, tall, gray hair, casual clothes. He walks into this diner alone, and he's fine. Me – maybe it's the hat, the gray ponytail, how I walk, I don't know. But the people in that Kansas diner, in particular – they looked at me with naked, livid hatred. (So did old women in Nebraska the next day. As I passed, one said to another, "Well, he's different." She spat "different" as though the word meant something vile.) In the diner, one farmhand couldn't take his eyes off me. Sitting with his friends at lunch, he stopped eating and stared at me. His face was trembling – trembling! – with rage and hate. I expected something nasty to go down, but all he did was stare. I was baffled. Why me?

Perhaps this is why:

These people are watching their towns die. Watching their way of life die. They are living the end of their dream, and they didn't believe that could happen. Like their ancestors, they've worked hard and hard and hard. They've played by the rules, believed the right things, worshipped the proper God, lived as they deeply felt life should be lived, and they're losing everything that matters to them. And there's nothing they can do about it except to keep working hard, because that's all they know. They're losing a way of life because of forces beyond their ken. Giant agribusiness, globalization, politicians selling them out, a tidal wave of history sweeping them away. Republicans and right-wing demagogues play to them, so they vote for Republicans. But it doesn't help. Liberals and Democrats rarely come to talk to them, and still more rarely talk with them – why, then, would they vote for liberals and Democrats? "Blue state" snobs make jokes about the stupid "red states." These rural people are not stupid. They're furious. Time has passed them by, and they don't know why. They've done and been everything that they were taught to do and be, and it's come to nothing. That's what liberals don't get. These people are furious, and they've got something to be furious about, however much their fury may be misdirected. They want somebody to blame – a useless but human need.

So I walk into their Kansas diner, and in my differentness I become an instant symbol of what's pulling them down. Their kids are leaving town, their towns are dying, their leaders are failing them, they're helpless to stop it. They expected to live prosperously in these places for centuries – their courthouses were built to last centuries. They're losing it all, and there's no one to give a damn. They didn't believe this could happen – could not conceive that their time would be so short and that their toil would be futile and that their dreams would die so hard.