The Rodeo Heritage Museum in Dublin, Texas, tells the story of the beginnings of the modern rodeo 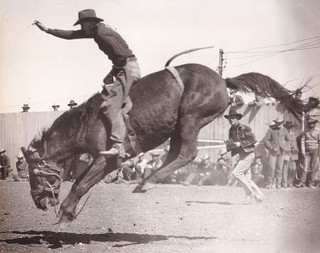 One of RHM's many photos (Photo By Gerald E. McLeod)

The Rodeo Heritage Museum in Dublin, Texas, tells the nearly forgotten story of the beginnings of modern rodeo and the cowboys and cowgirls who put on the show. The backstory of the exhibit showcases the company that supplied rodeo stock and performers to some of the world's greatest rodeos for 22 years.

In a community best known for the world's oldest Dr Pepper bottling plant and the last one to use pure cane sugar, the Lightning C Ranch is a faded memory. During the Forties and Fifties, the Texas-based company produced rodeos in New York City's Madison Square Garden, the Boston Gardens, and even the Houston Rodeo. Although rodeos have been around since the 1800s when real cowboys got together to show their skills in besting broncos, bucking bulls, runaway calves, and horse riding, it wasn't until the 1930s that the modern rodeo arrived. During the early days of professional rodeo, the biggest rodeo company in America called Dublin home. In 1937, a young cowboy from Idaho, Everett Colborn, took over the company that managed the stock and performances in New York, Boston, and Chicago. Colborn's World Championship Rodeo hosted the most famous cowboy events in the world.

Colborn leased 14,000 acres of land that covered the corners of three counties southeast of Dublin. In the pastures of what Colborn called the Lightning C Ranch, the young cowboys honed their skills on the largest ranch in the world dedicated to raising rodeo stock. The ranch even had its own rodeo arena.

By 1940, the city fathers of Dublin realized they had a gold mine in their back yard and persuaded Colborn to stage a rodeo in their fair city before boarding the train for New England. For the next 20 years, the Dublin Rodeo filled the stands of the Colborn Bowl, a long-gone arena that was just north of where the museum now stands. The rodeo company had a special 24-car train waiting at the depot to take performers and livestock north after the last performance.

Cowboy movie star and singer Gene Autry revived a sagging career by becoming the first musical act at a rodeo when he performed at the Fort Worth Stock Show & Rodeo. When Colborn wouldn't sell out to Autry, the singing cowboy joined him as a partner combining his Flying A Ranch Stampede rodeo production company with the Lightning C Ranch.

Autry took an active interest in the company and served as grand marshal for the performances. While he was away in the Army during World War II, Roy Rogers took his place. Part Wild West show and part rodeo, the event attracted city slickers by also featuring acts that included the Cisco Kid, the Lone Ranger, and even Lassie and Rin Tin Tin.

In 1959, Colborn sold his interest in the rodeo company, which also produced shows in Houston and other cities. By then the public had moved on to other entertainment outlets, and the championship rodeos were attracting dwindling crowds. The remnants of Colborn's empire became Cervi Championship Rodeo.

In the late 1990s, Carolyn Harbin met Colborn's youngest daughter in Dublin. The two struck up a conversation and a friendship that would blossom into the Rodeo Heritage Museum. Over the last two years of her life, Carolyn Colborn worked with volunteers to catalog the boxes of memorabilia and photographs from her father's long career. The result is the museum in Dublin. Hundreds of photographs, saddles, trophies, and printed materials document the years of performances and the careers of some the all-time-best cowboys. Harbin became the executive director of the museum when it opened in 2004.

The Rodeo Heritage Museum is at 118 W. Blackjack next to the Dublin Historical Museum. Doors open Wednesday through Saturday from 1 to 5pm or by appointment. The museum can be reached at 254/445-0200 or at www.rodeoheritagemuseum.org.

The Dublin Dr Pepper plant and Old Doc's Soda Shop are a block south of the rodeo museum at the corner of U.S. 377 and Elm Street. The gift shop and plant tours are open Tuesday through Sunday from 10am to 5pm. For more information, call 888/398-1024, or go to www.dublindrpepper.com.