What a week! Stephen revels in Austin in its top form. 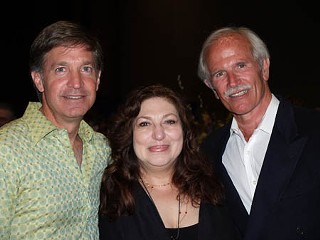 Mayor Wynn along with club owner Susan Antone and attorney Michael McGuire backstage at the Music Awards before the tribute to Clifford Antone. (Photo By Seabrook/juicythis.com)

RECAP From the 18th floor of the Omni, Austin looked like an anthill – the busiest, most frenetic anthill on Earth, with a soundtrack of a hundred songs being played all at the same time, emanating up from the streets like a fog. It was like looking down on Manhattan on New Year's Eve, with every street loaded with traffic that only crawled inch by inch and humanity oozing from every sidewalk, alley, and doorway. I-35 looked like the Boulevard of Diamonds & Rubies, and the air was electric. Aside from the outdoor venues, which seemed to pop up on every street corner and in every parking lot, every building seemed to be shaking – galleries, restaurants, clubs, salons, all seemed ready to explode with sheer energy. It was Friday night at South by Southwest, and it could have been Mardi Gras, Carnaval, or the Norman Invasion, but it was just Austin, packed to capacity. Below, participants reveled in groups, clumps, waves, and lines. Looking a few blocks away, I was shocked to see an empty space in a parking lot far away and felt that I should call someone immediately. But getting around was an issue. I thought I'd be smart to take a cab across the river instead of trying to park in all that madness. Unbelievably, I missed the Mary Weiss show on Saturday – I called Yellow Cab at 10:30pm to make sure I'd be at the 12:45am show on time. An hour later, the operator assured me I was next in line … and the cab showed up at 1:45am. God, I miss Roy's. On the other hand, we had the brilliant idea to have dinner at Moonshine before the Austin Music Awards. Great idea – fab food, of course, and incredible service from a waiter named Kyle, and when I picked up my car from the valet after the Awards Show, I was told my tire was flat and that they had repaired it for me. Now that's service. The overworked waiters, waitresses, door people, and bartenders at virtually every club and restaurant were helpful and friendly; the hotel staffs handled everything well; and the cab drivers (when you could get them) were great. Overall? I thought it was Austin at its best. 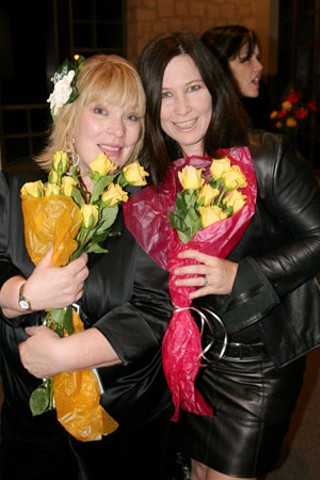 Queen of the Austin Music Awards Margaret Moser, along with former Go-Go Kathy Valentine, celebrates a 25-year reign over the Awards. I mean, celebrates the 25th anniversary of the Awards. (Photo By Todd V. Wolfson) 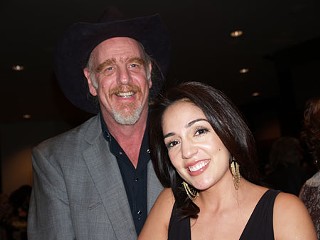 Asleep at the Wheel’s Ray Benson with KXAN’s Michelle Valles. You could almost smell the romance in the air. Or maybe it was her fragrance. Or maybe it was his musky herbal essence. (Photo By Seabrook/juicythis.com)
More After a Fashion columns