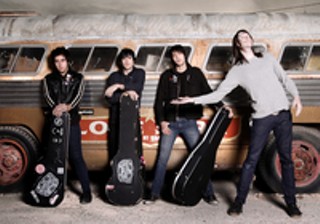 One thousand five hundred bands are in town this week. You should make an effort to fuck the drummer in every one of them. You may have to do a little switch hitting, but this is the third millennium, and in these modern times you shouldn’t let something as trivial as gender get between you and your goals. If you thought you might try to play it a little less crass and just “sleep with” all those drummers, forget it. Sleep is time consuming. You have to spoon and fidget and fluff … your pillow, and inevitably one of you (probably the one with the deviated septum who just knocked back the better part of the case of Miller Lite that was provided gratis to the band) will snore. Reality check. If you’re going to bang 1500 drummers, you’re going to have to get busy. Consider the logistics: Even at a generous 3.5 minutes per drummer, you’re looking at more than 87 hours of coitus. That’s an ambitious goal even for a pro like Jenna Jameson, Ron Jeremy, or Paris Hilton, and even then they would probably require the services of a well-trained NASCAR lube crew between shaggings. You’re also going to need to factor in at least a limited (they’re drummers after all) amount of foreplay. Maybe a few minutes of slap and tickle before you latch the door to the toilet stall or slide the van door closed. What? You thought you had time to take the elevator up to the hotel room? The one with the single bed that the band has been sharing with a scruffy retinue of groupies, drug dealers, and shirtless frat boys from Wisconsin? Think again. Do the math. Foreplay plus drive to the hotel plus elevator fluff session (different type of pillow) plus a few minutes of rug-burned ecstasy (lead singer gets the bed) equals 25 minutes, minimum. At that leisurely pace, 1500 drummers would take you more than 26 days, maybe 30 if the bass player smoked a joint before the gig. That’s a whole month. For some of these bands, 30 days might be their entire career arc. You’ve got to get ‘em while they’re hot, otherwise you might as well wait a week and work your way through 1500 Thundercloud employees. Same tattoos and piercings but at least they have jobs. Or, maybe instead of opening your legs you could just open your ears, relax, and get blown away by some of the best new music the world has to offer. If you don’t have a badge or a wristband, don’t sweat it, just cruise over to Auditorium Shores for SXSW’s Dew Music Festival. Saturday’s Dewings go on all day starting at 11am with the sweet sounds of the Palm School Choir and ending with metal monsters Mastodon. Scattered in between are other great bands like the Jellydots, Priestess, Riverboat Gamblers, and Against Me! That’s still plenty of drummers, and you may not even need a lube crew.