Simon Vega pays tribute to Elvis with his own Little Graceland 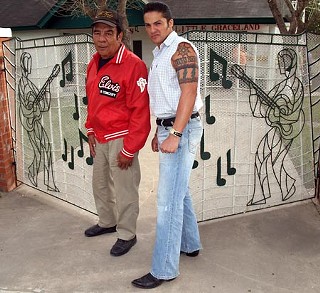 Little Graceland may be more than 1,000 miles from Memphis, Tenn., but at this shrine and museum in Los Fresnos, Texas, Elvis Presley is very much alive and is still the King.

"When I retired in '93, I decided I was going to do something for Elvis. Something to keep his name and music going," says Simon Vega, proprietor and curator of an extensive collection of Elvis memorabilia in the attic above his home.

Vega's interest in the King of rock & roll began around 1955 when he purchased his first Elvis records. Three years later, as a draftee in basic training at Fort Hood, Vega recognized another draftee as the face on the album covers. "I never really got to talk to him much at Fort Hood," Vega says. "During basic training, you don't have a lot of time for talking."

After their training, the recruits were separated into two groups. Half stayed in the States; Presley and Vega were shipped to Germany. Until Elvis moved off the base, he and Vega lived in the same barracks. "There were five or six of us that hung out together," Vega says. "We all became pretty good friends."

The centerpiece of Vega's collection of records and trinkets with Elvis' familiar portrait are several grainy, black-and-white photographs of the two smiling for the camera. "I would have to say that those are my most cherished possessions," Vega says. "They're priceless."

A few months before Elvis, Vega, and their other pals were about to be discharged, Vega says Presley offered him a job. "I had a new wife at home and just didn't see how I could support her by being a roadie for Elvis," Vega says. Two of Elvis' Army buddies, Charlie Hodges and Joe Esposito, were at Graceland when he died on Aug. 16, 1977.

After the Army, Vega returned to Texas, got a college education on the GI Bill, and settled down to teaching school and raising a family. When Elvis died, Vega says he was devastated. That's when he began collecting anything with a connection to his friend.

Vega doesn't have any idea of how many pieces of Elvis memorabilia he has displayed in the glass cases that line the walls, but it must be a thousand or more. He has a bottle of "Love Me Tender" shampoo, Elvis key chains, playing cards, dolls, pocketknives, neckties, and a complete set of Elvis Presley collector plates.

As the collection grew, word of Little Graceland spread across the nation. Vacationers and winter Texans heading down the speed-trap-lined highway to South Padre Island were enticed to stop by the replica of the gates of Graceland in front of Vega's house.

To Vega, there was no other entertainer like Elvis. He exuded charisma on his records, and to meet him in person, you could feel the electricity of his personality. "Once you got to know him, Elvis was a really good guy, but he was never an ordinary guy," Vega says. "Elvis liked to see people happy. That's part of why he sang and entertained the people."

Nine months older than Elvis, Vega is still a fireplug of a man at 72, although he has had heart and hip problems that have slowed him down. He estimates that an average of 50 visitors stop by his museum every week. "From the oldest to youngest," Vega says, "everybody still knows who Elvis was."

Soon after Vega retired from the school system, he began holding festivals on the weekends closest to the anniversaries of Elvis' birth (Jan. 8) and death (Aug. 16). It was about this time that he met Danny Lee, a young Elvis impersonator from Corpus Christi. The two, along with the help of the city, have ratcheted up the festivals every year since they began. "It's not a competition," Vega says of the Elvis tribute festival. "It's just good fun, and that's what Elvis would have wanted."

Little Graceland is on the western edge of Los Fresnos on TX 100. Vega opens Wednesday through Sunday from 9am to 5pm when he's in town. To make an appointment, call him at 956/233-5482.