Stephen's annual Oscar roundup of who DHOH (did her own hair), and look out, Neiman Marcus is coming! 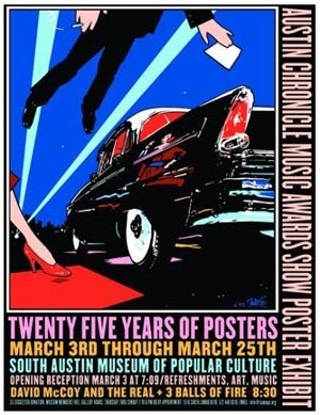 Happy 25th anniversary to the Austin Music Awards! Celebrate with an exhibition of the AMA posters at the South Austin Museum of Popular Culture.

RANDOM OSCAR NOTES During preshow, Jennifer Hudson showed up wearing a tinfoil jacket: Someone get this woman some professional wardrobe assistance. J-Lo's dress looked like it was strung with Mardi Gras beads. Cameron Diaz – I just don't know what to think of her. Year after year she shows up with horrible did-her-own-hair, and this year it was even worse. Not only did she not do her hair, no one did her hair. Her dress looked like a paper airplane – obviously designed by Cape Canaveral Couture. Meryl Streep looked predictably dowdy in her schmatte and too much ethnic jewelry. Nicole Kidman's dress was beautiful, but her hair was all wrong. Jack Nicholson looked like a cross between Marlon Brando and Lex Luthor.

LADIES WHO LUNCH We attended the Power of the Purse luncheon with the glamorous Karen Landa. A presentation of the Women's Fund of Central Texas, grants were bestowed upon a number of local organizations supporting self-sufficiency among women. The delightful Amy Simmons, founder of Amy's Ice Creams who was introduced with an anecdote about how she started her business by writing a hot check, gave an inspiring keynote speech on women in business and philanthropy. We also visited with the exquisitely beautiful actress Erinn Allison, who plays the hotel desk clerk in Fast Food Nation. Erinn has also just completed The Return, a thriller with Sam Shepard, and another thriller, Mexican Sunrise. She previously starred in Cristobal about Pancho Villa's raid on Cristobal, N.M. Ms. Allison herself is quite a thriller, and we suspect we'll be seeing a lot more of her.

TFHOF This year's Texas Film Hall of Fame is a tribute to the dearly departed Ann Richards and will also honor Betty Buckley, Bill Paxton, Richard Linklater, Elizabeth Avellán, and the movie State Fair which will receive the Tiffany & Co. Star of Texas Award (to be accepted by the legendary Ann-Margret). Special guests include Liz Smith, Lily Tomlin, Anna Deavere Smith, and Bud Shrake, with presenters Julie Delpy and Phyllis George. We'll be reporting on all the glamorous comings and goings.

UPTOWN Not too long ago, a friend asked if I'd go shopping with her. "Sure," I said. "Where do you want to go? Saks? Nordstrom? Or some of the independent stores?" She looked at me horrified and said, "I never shop in Austin." Well, she might now. Austin will get an injection of major high-style in one shot as the Domain (MoPac between Burnet and Braker) opens Friday, March 9 with 750,000 square feet of retail. Neiman Marcus is the hotly anticipated opening, along with Ralph Lauren, Louis Vuitton, Betsey Johnson, Tiffany & Co., Coach, Brookstone, L'Occitane, David Yurman, Barneys Co-op, BCBG, and Juicy Couture, and many other fine retailers. Holy moly, it'll take days to go through all those stores! Future additions to the Domain include a 20,000-square-foot community center, a 10-acre central park, 300 hotel rooms, 3,400 residential units, and 3 million square feet of office space. If you lived there, you'd never have to leave it!

AGENDA Saturday, March 3, 6pm, the wonderful One World Theatre presents Footloose with Kenny Loggins, a night filled with festivities including a benefit concert, catered dinner by some of Austin's finest restaurants, dancing, live auction, and raffle. All proceeds from this event benefit One World KidsReach. Go to www.oneworldtheatre.org for tickets and other info.