The Babe Zaharias Museum is a tribute to one of the greatest female athletes of all time, Mildred "Babe" Didrikson Zaharias 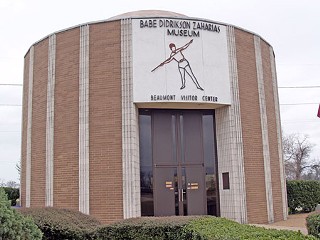 Mildred "Babe" Didrikson Zaharias was Michael Jordan, Tiger Woods, and Lance Armstrong all rolled into one 5-foot-7-inch, 115-pound frame. In an athletic career that spanned 23 years, she amassed a collection of medals and trophies that spills out of a small museum in Beaumont.

The Babe Zaharias Museum on I-10 in Beaumont is a big trophy case for the person chosen as the World's Greatest Athlete, man or woman, at the post-Olympic meet held in Chicago in 1932. Next to the 2-foot-tall silver cup awarded to her in Chicago are her three medals from the Los Angeles Olympics. She would go on to be honored as the Woman Athlete of the Year six times, including three straight years (1945-'47) and Woman Athlete of the First Half of the 20th Century in 1950.

Born in 1911 in Port Arthur, Didrikson got her nickname either from her mother or from the neighborhood boys because she was the Babe Ruth of the sandlot baseball games. By high school she was a star athlete. Before she graduated, a Dallas insurance company hired her as a secretary, and she became the leading scorer on the company's semiprofessional basketball team.

Beginning at the 1930 Amateur Athletic Union Championships, she was setting world records in track and field events. By the 1932 Olympics, she was already a rising national star. Limited to entering three events, Didrikson won gold medals in the 80-meter hurdles and javelin. The judges awarded her the only half-silver, half-gold medal in Olympic history for tying in the high jump after she was penalized for going over the bar head first.

Immediately after the Olympics, Didrikson began to capitalize on her fame as a sports hero. Her witty banter with sportswriters gave them plenty to write about but led her teammates to call her arrogant and pushy. When her name appeared in an automobile advertisement, Didrikson lost her amateur status.

At the height of the Depression, with her Norwegian immigrant parents to support, Didrikson went on the barnstorming circuit. She played on basketball teams, a men's baseball team, and was the star in billiard and bowling tournaments. She pitched in a Major League Baseball exhibition game, where she struck out Joe DiMaggio. In the museum are copies of phonograph records she made singing and playing the harmonica on the vaudeville circuit.

By 1933, Didrikson had discovered golf. She won her first tournament in 1934. Over the next 20 years, she won 82 golf tournaments, including 36 professional tournaments, and was one of the 13 founding members of the Ladies Professional Golf Association.

Able to smash a golf ball more than 240 yards, Didrikson burned up the toughest courses, often setting course records. In 1943, she was the first American to win the British Women's Amateur Championship. When allowed to compete, she often qualified in men's professional tournaments.

A set of her golf clubs sits in a corner of the museum along with trophies and newspaper headlines. A crowd-pleaser at any tournament, Didrikson played to the gallery with wisecracks and displays of athleticism. When asked how she hit the golf ball so far, she replied, "It's not just enough to swing at the ball. You've got to loosen your girdle and really let the ball have it."

Unfortunately, the body that had served her so well gave out at an early age. In 1953, she was diagnosed with colon cancer. After surgery, she returned to the circuit to win five more tournaments before she was hospitalized for the last time. She died at the age of 45 in 1956.

Didrikson and her husband, George Zaharias, established the Babe Didrikson Zaharias Foundation that still gives money to cancer research, women's athletics, and supports the museum. The Babe Zaharias Museum is at 1750 E. I-10 in Beaumont. Admission is free to the exhibit daily, from 9am to 5pm. For more information, call 409/833-4622.

More of Babe's trophies can be seen in the clubhouse at the Babe Zaharias Golf Course in Tampa, Fla. You can see her famous golf swing in the movie Pat and Mike with Katharine Hepburn. Didrikson's life story is portrayed in the 1975 movie Babe, with Susan Clark and Alex Karras.