The Question of Iran 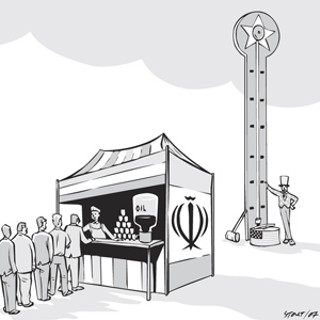 The major nations hated but tolerated the United States' invasion of Iraq. Their interests were not directly threatened, so they could afford toleration. China, in particular, subsidized the Bush invasion with substantial loans, because it's in China's interests for the U.S. to lose credibility, overtax its military, and undermine its economy through such debacles as Iraq. Iran, however, is a very different story, and, for some reason, that story is not being told.

The information is available in newspapers, yet even columnists for those papers – and every politician, military analyst, and TV commentator I'm aware of – seem ignorant of crucial facts. They speak of Iran within the storyline the White House has established – Iran's interference in Iraq, Iran's development of nukes, Iran's extremism toward Israel, Iran's support of Hezbollah and Hamas, and Iran's desire to be the major player in the region – the familiar (and largely true) headlines, all of which seem to be leading to a U.S.-Iran confrontation. But Iran is not Iraq.

For starters, Iran is nearly four times Iraq's size, with more than 2 times Iraq's population. And Iran is, well, Persia – an ancient yet urbane culture with a rich history and a profound national identity. Iraq, by contrast, was created for exploitation by England and the League of Nations after World War I and consists of sects and tribes traditionally hostile to one another. Iraq was a crippled state when the U.S. invaded in 2003, yet after four years, we are far from able to dominate it. Given Iran's size, population, and culture – plus the depleted resources of the U.S. military – there's not much America can do to Iran but bomb, and (as "shock and awe" tactics proved in Iraq) bombing will not subdue or even much change Iran. But it could change the United States, very much.

Military action against Iran is not likely to be tolerated by Europe, Russia, and China. Unlike Iraq – and whether or not a delusional White House will admit it – Iran is a player on the world's stage, a country in which the major nations have huge interests.

Russia is solidly in Iran's corner, for obvious strategic reasons. "Iran has the world's second-largest proven reserves of conventional crude oil, after Saudi Arabia, and the second-largest reserves of natural gas, after Russia. ... Together, Russia and Iran control almost half the world's proven reserves of natural gas. If they coordinated production and marketing decisions, those two countries could be twice as dominant in international gas markets as Saudi Arabia is in the global oil market" (The New York Times, June 20, 2006, p.17). "President Vladimir V. Putin said ... Russia would consider OPEC-like cooperation with Tehran on sales of natural gas. [Putin said,] 'We think that the people of Iran should have access to modern technologies, including nuclear ones'" (The New York Times, Feb. 2, p.10). Russia is already building a "large" nuclear power plant in the Iranian city of Bushehr (The Christian Science Monitor, Dec. 27, 2006, p.1).

Then there's China. "At the end of 2004, China became Iran's third-largest export market for oil. Total Chinese investment in Iran's energy sector could exceed $100 billion over the next 25 years. China is negotiating a deal to invest as much as $16 billion in developing Iran's Pars natural-gas field despite strenuous U.S. objections" (The Christian Science Monitor, Jan. 20, p.13).

"Some 45% of China's oil imports from January to November of last year were from the Middle East" (The Economist, Jan. 13, p.37). China's energy needs are enormous and growing; it wants no further destabilization in the region.

As for Europe, U.S. demands for an economic boycott of Iran have been ignored. "Italy, Germany, France, Spain, Austria, the Netherlands, Sweden and Britain all [have] extensive business dealings with Iran, particularly in energy. ... European governments provided $18 billion in government loan guarantees for Iran in 2005. ... In addition to buying oil from Iran, European countries export machinery, industrial equipment, and commodities [to Iran]" (The New York Times, Jan. 30, p.1). Even Pakistan and India are getting into the act. "President Pervez Musharraf of Pakistan visited Iran [on Jan. 29 to discuss] a natural gas pipeline between Iran and India, which would cross Pakistan. India's foreign minister ... is expected to be in Iran [soon] to discuss [the project]" (The New York Times, Feb. 6, p.8).

In short, Iran is a hub of major commerce involving the core energy strategies of Russia, Europe, India, and China.

Russia's President Putin has taken his stand with Iran, referring in the strongest terms to "our Iranian partners" (The New York Times, July 16, 2006, p.1). The Europeans, too, have been sending unmistakable signals disapproving of U.S. foreign policy in general. "[With investigative help from Spanish police], a prosecutor in Munich indicted 13 CIA officials last week for kidnapping a German of Lebanese descent. ... Europeans have steadily refused to accept the concept and phrase, 'war on terror.' ... Last week, European Union officials in Brussels sought to reduce the amount of information given to U.S. agencies on air passengers leaving Europe. An official in charge of data protection for the European Central Bank similarly advised that [the level of financial information] being sent regularly to the US ... is 'unacceptable.' ... In Italy, prosecutors put out warrants several months ago for 25 members of a CIA team that abducted a Muslim cleric" (The Christian Science Monitor, Feb. 5, p.1). In the sign language of diplomacy, this is strong stuff but not stronger than France's President Jacques Chirac saying "he would not be overly worried if Iran obtained a nuclear weapon" (The New York Times, Feb. 2, p.8). That article goes on to report that Chirac "said aloud what some policy makers and arms control experts have been whispering: that the world may have to learn to live with a nuclear Iran." Later Chirac backtracked, but in the most blasé way, claiming "he had spoken casually and quickly ... because he believed he had been talking about Iran off the record" (The New York Times, Feb. 1, p.1). In the language of diplomacy, that's no retraction. If anything, it's a confirmation.

But it is the Chinese who've denounced U.S. policy most strenuously. On Feb. 2, The New York Times printed on p.6 what should have been a front-page story: "A senior Chinese government official [Ye Xiaowen] issued a rare public rebuke of President Bush ... accusing him of waging a 'unilateral' battle against terrorists that had worsened global tensions. ... In a front-page article in the overseas edition of The People's Daily [Mr. Ye wrote that] Bush's past references to a 'crusade' and to 'Islamic fascism' were verbal gaffes that revealed his effort to turn the fight against terrorism into a religious war. ... 'The more [Americans] oppose terrorism, the more terror they produce.' ... Mr. Ye wrote that Bush had effectively 'hijacked' one religion, Christianity, to engage in a battle against one, Islam. ... [Casting] aspersions on an American president by name [is] a step often considered a breech of diplomatic etiquette." "The comment was unprecedented in a state where official decorum is rigidly maintained" (The Christian Science Monitor, Feb. 5, p.1).

In diplomatic terms, China fired a shot across America's bow. In more ways than I have space to note, China has the power to cause an economic downturn, even a sudden recession, in the U.S. – especially if the European Union and Russia are on board. All are sending the strongest signals that Iran may be the line they draw in the sand against Bush.

Maybe they're bluffing. Maybe they're not. Either way, they've gotten Washington's attention. Four days after China's statement, The Christian Science Monitor reported (Feb. 6, p.1) that "the Bush administration is signaling a more cautious tone toward Iran. ... Senior officials from the White House, State Department, and Pentagon are playing down the evidence the U.S. possesses of 'nefarious' Iranian involvement in Iraq's spiraling violence ... insisting the U.S. wants to work out problems with Tehran diplomatically. ... [There's been] a repeated delay in a promised presentation of evidence against Iran."

In his New York Times column of Feb. 1, David Brooks wrote that, at the Davos economic conference, "some Europeans apparently envisioned a post-American world." Brooks' next sentence: "Forget about it." Don't. Thanks to Bush and his enablers, the world is very, very tired of us. If they have the will, China, Russia, and the EU have the means to hobble our economy. They'd take an economic hit in the process, but it might be worth it to them. If Bush doesn't back off on Iran, the world may change in ways that most Americans still find unthinkable.