Stephen's there as the fur and the rose petals fly ... and reconnects with Ken. No, not the doll, silly, the Neiman Marcus veep. 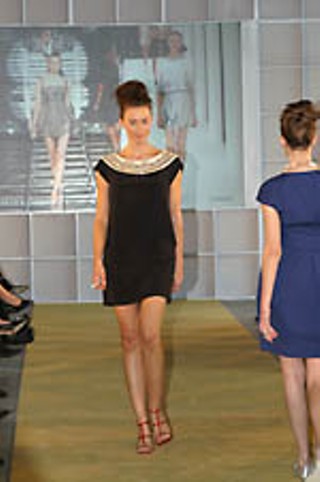 Neiman Marcus gives a sneak peek of spring, with the opening of the store on March 9. (Photo By Robert Godwin)

SHOW-ING So I went to the spring fashion preview by Neiman Marcus – the 30th floor of the Frost Tower has views to die for, and the views on the runway were just as beautiful. Flat shoes, short skirts, patent leather, eyelet lace, and cropped jackets were among the messages for spring (but please, not all at once). The show was emceed by the delightful and funny Ken Downing, NM's senior vice president and fashion director, who explained various trends and gave examples. I had to go say hi to Ken afterward – a very long time ago in a far distant universe (Seattle, 1986), Ken judged a design contest that I had entered. I didn't actually know him at the time – just enough to be terrified of him. He was so chic and stylish in a Halston-ish kind of way, and everyone I knew who knew him treated him like a god. My model (wearing a black dress with a velvet bodice that had a bateau neckline in front that plunged to the waist in back, and a full ballerina-length skirt on black-on-black, figured taffeta with a huge petticoat) glided by the judge's table and handed Ken the hem of her dress to examine. In a sea of Dynasty-inspired gowns, my simple black dress won the contest, and somewhere there is a photo of Ken applauding my dress and another one of him shaking my hand. He laughed hard when I reminded him of the contest and remembered it well. "Was I that terrifying?" he asked me. "No," I said. "We just knew you would do something big." Being fashion director of one of the world's most luxurious stores is something big indeed.

FINE DINING There's no question in my mind that Project Transitions' fundraiser Guess Who's Coming to Dinner? is one of the most original and interesting formats for a benefit that I've seen: 25 dinner parties thrown by hosts all over the city with a guest list of anywhere from eight to 100, each with a different theme. I went to the glorious Victorian home of Rich MacKinnon & James Rebok in Hyde Park for a Philippine Phusion spread that was as exotic, delicious, and seemingly endless as new delicacies arrived from the kitchen. My dinner partner on my left was pianist James Dick. I had no idea I was sitting next to greatness – at the afterparty, someone said, "Oh, you were at that party with the famous pianist." "Oh, I don't think so," I said. "Yeah," they replied. "Dick something." "Oh no," I replied. "There was no Dick at my table." (Well, actually, since Zach Scott's Carol Adams was the only female, there was a lot of dick at the table.) "James Dick," my friend finally blurted out. Then I was embarrassed because James had been my attentive and gracious dinner partner, and I had been charmed by his good manners and melodious voice. But I'd been yakking too much to ask him what he did. Around 9:30pm, the hundreds of guests at the various parties convened at NEST for champagne and dessert, and to trade stories of the party they had attended.

A BED OF ROSES "I don't know how I got into this," my sister Margaret moaned. "I wrote the cover story; I'm not a photo stylist!" But apparently she was wrong about this. Hours later she was at Pink Salon with Kathy Valentine, who was thrust into the capable hands of Deborah Carter for hair and makeup. Knowing that the shoot would involve lots of roses and rose petals (provided by Cho, Crystal, and Monika at Enchanted Florist; Denise at Austin Wedding & Event Coordinators; and the fine folks at Floral Renaissance), Margaret told Kate X, my esteemed editor, "I don't know why I have this sneaking suspicion that we're going to be on the sidelines tossing rose petals at Kathy." Then her cell phone rang, and photographer Todd V. Wolfson says, "Hey, Margaret! I was thinking about maybe having you and Kate stand on the sidelines and …" Kathy (wearing Chia in the cover shot and Dolce & Gabbana in the first photo in the story) was soon on the set, and the flash was going off like fireworks on the Fourth of July. The work, on this week's cover, tells the whole story.