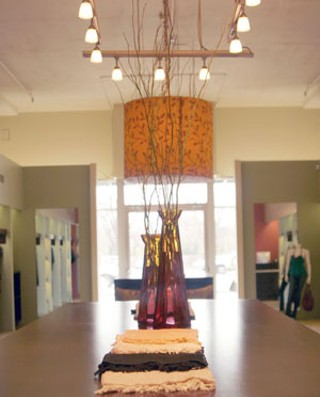 The interiors of Shiki's new north location are as stylish as the merchandise. (Photo By Todd V. Wolfson)

MEA CULPA Forgive me, dear readers. I lied to you. Last week I told you that Shirley MacLaine would be attending the Texas Film Hall of Fame. I was possessed by Irma la Douce and had no business saying that. MacLaine had indeed been invited, and being such a fan, I wanted her to attend … but she is not. My apologies for popping the cork too soon. Let me take you all out to lunch to make up for it.

DEATH BY CHOCOLATE I'd like to thank whomever it was at Mastodon Ventures who sent me the gigantic solid chocolate mastodon. As I pulled the unwieldy mystery object from my mailbox, the weight of it made it slip out of my hands and land on my foot, injuring two toes. But what a sight it is – so glorious you wouldn't consider eating it, but perhaps it will make a wonderful doorstop. Mastodon, the venture capital firm, as you may well know, is a major donor and sponsor for such nonprofits as Arthouse, the Heritage Society of Austin, Austin Film Society, and Texas Film Hall of Fame, among so many others.

JET SET I've recently returned from a trip to Seattle that included a side trip to, um, Tijuana, Mexico. Both places are virtually fashion-free. Seattle was cold, and sometimes being cold precludes being fashionable (just like being hot in Austin sometimes precludes being fashionable). But sometimes the lack of fashionable citizens in a city is heartbreaking. Yes, I mean you, Seattle. I do not make this pronouncement lightly: I've spent many years of my life in Seattle. I was there for periods in the Seventies, Eighties, and Nineties. When the grunge trend "happened," it was not a revolution in Seattle style; it was simply putting a name to a pre-existing look. And it is still the predominate look there. There may be a clutch of fashionable people somewhere in that city, but I suspect they live in an armed bunker somewhere near downtown and venture out only in cashmere-clad groups to procure provisions. Now, in Tijuana, of course, dressing fashionably could be a shortcut to kidnapping, so it was understandable that we did not see the streets teeming with fashionistas. Our driver swore to us that there were in fact many fashionable citizens of Tijuana, but, like Seattle, they must live underground or in barbed-wire enclaves in the surrounding hills. Honestly, these two cities make Austin look like Paris.

CONGRATS The reopening of Shiki's north store in a new location, Guadalupe 31, at 3016 Guadalupe #200, was celebrated with a grand opening last weekend. They invite you to come see the new collections of chic styles for which they have always been noted. And of course, their Second Street location is always ready to serve… The Waxing Studio opens its second location on Thursday, Feb. 1, 4-7pm, with $1 eyebrow waxes for the first 20 attendees. The brainchild of Jodi Holtz, waxer to the stars in San Francisco (Winona Ryder, Fran Drescher, and Sharon Stone), the Waxing Studio not only offers waxing of all the usual places (and a few more!), they also offer complete skin-care services. In addition to their original William Cannon location, they can now be found on South Lamar. Visit www.thewaxingstudio.com for complete info.

AGENDA Next month, Saturday, March 24, at the Renaissance Hotel (9721 Arboretum Blvd., 343-2626), the Austin Lyric Opera Guild presents the Opera Ball 2007: Memoirs of a Diva, celebrating 20 years in Austin. With fabulous food, an auction, and music by Beto y los Fairlanes, ALO is also offering a less expensive alternative to the ball – an afterparty that includes drinks, dancing, and dessert. Go to www.austinlyricopera.org for more info… Friday-Sunday, April 13-15, at the Austin Convention Center, the Heritage Society of Austin presents the Antiques Show – the first nonprofit show of its kind in more than 25 years, slated to protect the heritage and culture of Austin. Dealers from all over the country are coming, and prices will range from $50 to $50,000. Further info is at www.heritagesocietyaustin.org… Saturday, April 28 at the Palmer Events Center, Zach Scott Theatre presents its Red, Hot and Soul fundraiser, Come to the Cabaret. With some details to still be announced, look forward to terrific food, auction items, and dazzling entertainment. Info will be posted at www.zachscott.com soon, but tables can be purchased by calling 476-0594 x225.