Your Style Avatar counts to 10 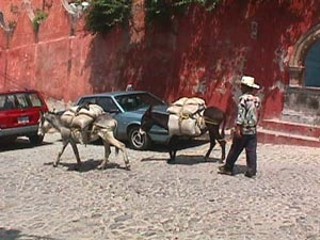 Another reason not to move to Austin: Burros mingle with interlopers in cars on I-35 during rush hour in Austin.

TOP 10 REASONS NOT TO MOVE TO AUSTIN

1) We have bats. Millions of horrid little winged creatures that smell.

2) We all wear shorts and cowboy hats all the time.

5) Traffic. We still ride burros, and our roads are not equipped for motor vehicles.

7) We're still a small town with no buildings taller than 33 stories.

8) The Christmas decorations on Congress Avenue are hideous.

9) There are not nearly enough big-box stores to fill the overwhelming demand.

10) There are not nearly enough marathons and 10Ks that shut down our streets.

THESE ARE A FEW OF OUR FAVORITE THINGS

9) Standing on the star and clapping under the dome

10) People-watching in every part of the city

3) Fed-Ex (and we don't mean the shipping company)

(Note to readers: my editor made me remove David Hasselhoff)

NO. 1 CELEBRITY TREND THAT MUST BE STOPPED

First it was dogs. Then it was babies. Now it's beaver. No less than three times in 2006, America was forced to endure the sight of the groomed, pampered, and camera-ready private parts of Britney Spears, Paris Hilton, and Lindsay Lohan as they each "accidentally" flashed the world. Outbreaks of temporary blindness are threatening the free world. While we're on the subject, one more shirtless picture of Matthew McConaughey and the blindness will be permanent.