Throw down after throw down, 2006 was one biiiig par-tay for your Style Avatar 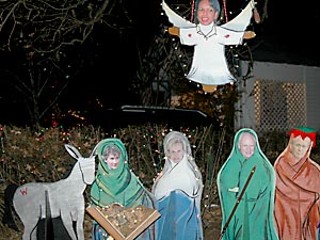 The Miracle on 37th Street. The hysterical Mary Cheney Nativity Scene featuring the wise Dick Cheney carrying a shotgun instead of a staff, Condi as the gap-toothed angel, and Dubya as the ass.

PARTY LINE 2006 Reviewing the parties I enjoyed this past year, it was no surprise that many of them represented institutions that make the arts scene in Austin happen. Arts are for everyone, and it's the parties at the top that raise the millions so that the museums, opera, symphony, ballet, and theatres can open their doors to all of us. We began the year with the very first First Night – the New Year's streets came alive with eye-popping action and activities for everyone in the city. We saw a tradition begin and look forward to a lifetime of more New Year's fun. Texas Film Hall of Fame is always the best of the best events, honoring films and film icons from the past and present to raise money for the Austin Film Society. Cybill Shepherd, Matthew McConaughey, Kris Kristofferson, JoBeth Williams, and many more stars were in attendance. The combination of stars, film lovers, philanthropists, and local characters is a surefire recipe for a knockout party. The Austin Museum of Art's Art Ball was a juicy orange glow this year with Jeanne-Claude and Christo in attendance, and the follow-up Art Bash with Grupo Fantasma was spectacular, one of Austin's best annual parties. Also benefiting the museum later in the year, St. Thomas Boutique's Look for Love party with the Zac Posen fashion show was dynamite and probably the best fashion show ever to hit Austin. Even Mick Jagger showed up at the afterparty. Austin Lyric Opera's Le Bal de l'Opera was elegant and lush (and had the most beautiful invitations of any party this year). Later in the year, Austin Lyric Opera gave the wonderful Perfect 10 event at Saks honoring 10 figures without whom the arts and philanthropy worlds in Austin would not be complete. The Zach Scott fundraiser, Red, Hot and Soul, was dazzlingly fun and a riot of color and entertainment. Platforms of dancers; a wild, live auction; and wonderful table decorations helped make it a hit. The Umlauf Sculpture Garden Party is a favorite annual event of mine – strolling through the graceful gardens, admiring the lovely art, nibbling on the best food and wine in Austin, and raising money, of course. The opening of the new Blanton Museum at UT was a staggering undertaking, indeed. Day after day of events in their beautiful new space opened Austin's eyes to the fabulous treasures the museum holds, and we are luckier for it. The Ballet Fete given by Ballet Austin is always an affair to remember – notably, Alexa Wesner looked incredible as a modern-day Marie Antoinette, especially when she scurried across the balcony of the Four Seasons and her crinolines flew up in front of her face, revealing gorgeous legs and hips clad in snowy white bikini underwear. KLRU's Block Party was totally Austin – with cocktails at City Hall and dinner and performances under an enormous tent outdoors. Los Lonely Boys rocked the house, and our favorite public television station showed us once again why they're our favorite. The Paramount's 90th birthday party shut down Congress Avenue with seemingly miles of tents where dinner was served – a fitting display to honor another of Austin's treasures. At the same time was the always-marvelous Arthouse 5x7 event (I think of it as the "art brawl"), and many of Austin's arts supporters mingled back and forth between the Paramount and the Arthouse. Among the other parties, Anthony Nak's Rock and Rocks party was possibly the most glamorous – the clothes and jewelry were gorgeous, Hedda Layne sang, and there was a VIP room that was everything you hoped a VIP room would be. The book party for Laura Shriftman and Elizabeth Harrison's Party Confidential was a socialite's wet dream. Given by Lance Morgan, Carla McDonald, and Margaret Krasovec, the handpicked guest list glittered, and the gaggle of Houstonians in for the bash made it sparkle. Attorney Mark Mueller's annual party had plenty of magic, not the least of which was having Strike Productions turn the Austin Music Hall into a turn-of-the-century New Orleans brothel. The New Orleans musicians rocked the casbah, and hundreds of guests stayed until the early morning hours. The party honoring Quentin Tarantino at the Volitant Gallery on Congress was unforgettable as Quentin made his way through the crowd, making everyone feel welcome. Undoubtedly one of the most interesting parties of the year was a private one which shall remain so, but suffice it to say that for every three guests, there was an armed guard. The home was astonishing; you could imagine the host greeting you at the door and proudly gushing, "Look! Everything is brand new!" And it was. The carpet was still shedding, the paint on the art looked wet, the labels on the glassware were still affixed, and the trophy wife's body was fresh from the surgeon.