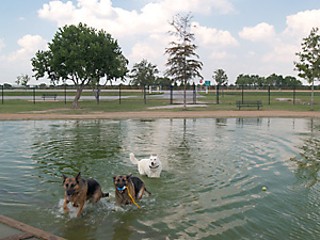 The Millie Bush Bark Park on the west side of Houston is the best leash-free dog park in Texas. If Fido got to pick the destination for a day trip, this is where he would go.

Harris County's first and largest dog zone opened in 2004 and became an instant success with canines and their humans (there are now five other dog parks in Houston). The 15-acre fenced area has three ponds that are the center of social and play activity. The majority of the dogs at the park were either swimming out to retrieve a ball or cooling off in the shallow water along the concrete bank

There is also lots of open space for the dogs to stretch their legs for the love of the run and plenty of pals to join in the chase. The park is large enough that unruly pets can be moved to another part of the park for a time out. For the most part, the humans seem to be content with letting the animals work out their differences. The park has a separate fenced area for dogs weighing 20 lbs. or less.

Dogs will be dogs, and this is a place for them to be themselves. Still, at any dog park there are rules of etiquette that make everyone's visit more enjoyable. While it might be great exercise and training for most dogs, not all dogs do well in an uncontrolled environment. Some dogs are bullies, and some dogs are too timid to feel comfortable in a pack. Most dog parks are very busy on weekends and holidays, and this is not the time for a first-time visit. It is best to gradually introduce your dog to the freedom of a dog park, according to the Houston Dog Park Association.

Along with lots of space and three doggy-only swimming pools, the entrances and exits to Millie's dog park are double-gated to make coming and going much easier and safer. Some dogs enjoy the muddy areas in the park, and owners love the doggy showers. There are fake fire hydrants and pooper-scooper bags for the pets, but humans will have to go outside the dog park to use the facilities. A circular path with lots of shade and benches connects the two main ponds which are at opposite ends of the park.

The dog park is five miles south of I-10 and about a mile from the entrance to George Bush (the elder) County Park (formerly known as Cullen-Barker Park) off Westheimer Road at TX 6. It was named for Millie, the former president's Brittany spaniel. At 7,800 acres around Barker Reservoir and along Buffalo Bayou, George Bush Park is Harris County's largest park. It also has picnic areas, a model airplane field, hike-and-bike trails, and a shooting range.

Millie's park was selected as the best dog park in the country by Dog Fancy magazine in 2005 and has been featured on cable TV's Animal Planet. People for the Ethical Treatment of Animals selected the Houston dog playground as the second best in the nation. It was beat out by Point Isabel Dog Park in Richmond, Calif., the country's largest off-leash dog park that includes a puppy bathhouse and a vegetarian cafe overlooking Golden Gate Bridge.

The 2006 winner of Dog Fancy's best leash-free dog park was Fort Worth's Fort Woof. East of downtown and north of I-30 between Beach Street and Oakland Boulevard in Gateway Park, this doggy park has little going for it in comparison to Millie's Bark Park other than a great view of the Fort Worth skyline and the Trinity River.

Fort Woof is only 5 acres and is divided into areas for large and small dogs with double-gated entrances. The park has human-appreciated amenities such as picnic tables, benches, and a pet-washing station but few pet features other than a big field. To their credit, many of the improvements to the park were done by volunteers rather than by a county parks department. Sometimes the ability to safely run free is a dog's best friend.