Your Style Avatar defines "tarantism," to which we might add, "obsequious" 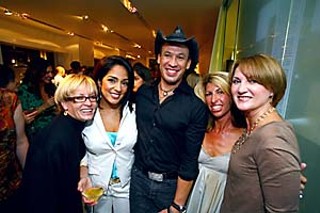 ON THE QT As we learned in last week's PopBitch.com newsletter, the word "tarantism," according to the dictionary, is defined as a nervous disorder marked by uncontrollable bodily movements. I'm not sure if it was tarantism that I exhibited after hanging out with Quentin Tarantino on Saturday night, but I was definitely delirious. The swank private party given by Conde Nast along with Grey Goose Vodka (omigod those Icon Martinis were deadly) was Fab. U. Lash. We had the best time there. The Volitant Gallery is a great space loaded with terrific art (owner Chris Slover is also part of the chic new Belmont), and on this occasion, it was also loaded with great food from P&K Grocery and a wide swath of Austin's artistic, social, and political population. It was an occasion in tribute to the Sundance Channel's Iconoclasts interview show which paired QT with Fiona Apple. Fiona arrived at the party first and pretty much kept to herself, apparently afraid of the crowd, but when QT arrived, he was as outgoing, funny, and brash as you could ever want a guest of honor to be. In his AC/DC T-shirt, he mingled and chatted with everyone and did everything that Fiona didn't. I turned around at one point, and he was right behind me. I reminded him that we'd met on several occasions through the esteemed Chronicle Editor Louis Black, and he said, "Stephen, of course, I know who you are. I read your column every Thursday." That was the moment that I became tarantistic.

RIP We love you, Ann Richards – a great Texas lady along with Lady Bird Johnson and Liz Carpenter.

ACL-ing We were pleased to see BMI put their massive publicity machine behind Central Texas artists Flyleaf (www.myspace.com/flyleaf) from the Belton-Temple metroplex, Marcus Witt (www.canzion.com/marcoswitt) from San Antonio, and Austin's own beloved Carrie Rodriguez (www.carrierodriguez.com), who has released her first solo album, Seven Angels on a Bicycle, since her career as part of a duo with legendary BMI songwriter Chip Taylor ("Wild Thing," "Angel of the Morning").

ROCK AND ROCKS AND MORE ROCKS It was so glamorous you could die. Or I could die, anyway. Almost did. Gorgeous women, handsome men, beautiful clothes, and even more beautiful jewels (as in the Anthony Nak kind). It was Anthony Nak's Rock and Rocks Party benefiting KLRU and HAAM (Health Alliance for Austin Musicians). "Best of Austin" award-winner Hedda Layne and her husband, composer/arranger/guitarist Troy Lee Warden, performed – they do some of the coolest music in such an original way. To hear her is unforgettable … to see her perform is nirvana. While so much of Austin drools over the newest garage-band-of-the-moment, Hedda and Troy are kicking ass. Visit her cool new Web site at www.heddalayne.com. The building that Anthony Nak's flagship store is in is the former 800 Brazos Building, now called Brazos Place, as it has been purchased by Stefan Stratton and Michigan's Pomeroy Investment Corp. and will undergo total renovation as – what else? – luxury condos with – of course – retail on the street level. AN will still be the building's anchor.

AGENDA The most important place to go right now is www.imfor4.com and give your support to Proposition 4… Tonight! Thu., Sept. 21, 7-10pm, at Orbit Salon, drinks, music, and haircuts make a smashing combination as the salon raises money for its annual entry into the Style Cup. Cuts are $15, though Orbit will gladly accept more. For more information call them at 480-0382 or go to www.orbitsalon.net… Sat., Sept. 23, 6-10pm, join the very cool men's store Upstairs as they inaugurate the wonderful new Downstairs, just a block away from Upstairs at 2110 S. Lamar… Fri., Sept. 29, with a gala performance at the Paramount and a fab French dinner and ne plus ultra afterparty at the Driskill, Ballet Austin presents its classically innovative to-die-for annual Ballet Fete. One of the most wonderful and over-the-top benefits in town, this year's theme is Versailles, and you know they'll all be eating cake at this one. Honorary chairs Dr. Ernest and Sarah Butler and James Armstrong and Larry Connelly invite you to join them by purchasing tables through www.balletaustin.org/fete.