Stephen learned of the Beauty of Life – and what's hot for autumn – at this fashion forward event. 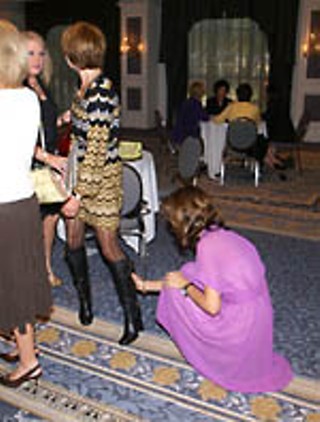 The Style Channel's Finola Hughes of How Do I Look? announced at the Hospice Austin benefit that the most important footwear for fall was by Chloé. So when she spotted event co-chair Karen Landa's Chloé boots, she fell to her knees in adoration, examining every detail. (Photo By Robert Goodwin)

RANDY ANDY Gossipeuse Ben Widdicombe of the New York Daily News says, "Tennis hunk Andy Roddick has a sense of humor about the gossip columns. Last week, he was laughing with pals in the Lacoste suite at the U.S. Open about rumors of his romance with Maria Sharapova. 'Isn't it amazing how much press you can get about something that isn't true?' Roddick said. 'Except why are they calling us "Roddicova"? Why not "Sharadick"?'" Nice, Andy. In what has become known as Roddick's "carousel of coaches," the tennis star fired his coach, Dean Goldfine, in February for whatever reasons. Goldfine did Roddick no PR favors, as evidenced in an old column by Charlie Bricker in the South Florida Sun-Sentinel). Bricker wrote, "I asked Dean Goldfine, Andy Roddick's new coach, to tell me one thing he learned about Roddick that he didn't know before they connected in December. Goldfine, who had known Roddick only casually, immediately identified Roddick's appreciation of other people. 'Even if it's something as simple as just getting him a drink, he thanks you and let's you know how much he appreciates it.'" Gulp.

THE STYLE MILE Attended the Beauty of Life benefit for Hospice Austin, co-chaired by the beauteous Karen Landa and featuring the fabu Finola Hughes. Finola, who hosts the Style Channel's How Do I Look, was a great speaker – sharp, smart, funny, and informed … but I hated her dowdy dress, even though she wore it well. What I did like were the black tights and black patterned hose, which have evidently made a huge comeback, as worn by Finola and multiple members of the high-fashion high society who were present. I'm so tired of seeing bare legs on women whose legs don't look good bare and bare legs with outfits that scream for some variety of leg treatment. Fortunately for the hosiery business, bare legs are disappearing as quickly as the leaves on the trees. It was funny to see how the crowd of 700 women was divided between those wearing summer clothes and those who chose fall. Purple was everywhere – even I was wearing it – and it looked so important, fresh, and new. We'll be seeing lots of it coming up. Of course the ladies were thin and chic in their outfits – but frankly, I was amazed by the untouched and barely touched plates of food being returned to the kitchen. It matters not to me how and when the ladies eat – but I wonder about all the food that's wasted, and I think we should figure out how to get the food bank or Meals on Wheels there after these events to make good use of the food. I'm sure there's some sort of health regulation prohibiting it, but wouldn't it be great if we could get the two together? Then these events are not only benefiting the chosen charity but other charities as well, and we all win that way.

IT'S THE PITTS So the newly socially conscious Brad Pitt has announced that he and Angelina will not be getting married until "everyone else in the country who wants to be married is legally able." Well, that's a lovely vote of confidence for gay marriage, but the ugly reality is that legally sanctioned gay marriage in every state is still decades away, and what Pitt seems to really be saying is that he won't be marrying Angelina.

LOST AND FOUND If you know the brilliant hairdresser Cindi Herrera, formerly of Avant, tell her she has clients who are desperately trying to find her and to write me at style@austinchronicle.com, and I'll forward the info to her… If you know Fe De Rico, the graffiti artist who did those wonderful stencils on the old Tower Records building, a reader has a commission for him. Write me at the above e-mail address…

AGENDA If you haven't seen the brilliant American Fiesta by Steven Tomlinson, it's here for a second run on Sun.-Thu., Sept. 17-21, at UT's McCullough Theatre. Tickets are available at www.utpac.org/2006/calendar.php… A new theatre, Rogue Performance Venue opened on Fri., Sept. 15, across street from Ruta Muya (211 E. Alpine #300). Artistic Director James Cotton is presenting Bars, Bedrooms … Bukowski about writer Charles Bukowski, through Sun., Oct. 8, with shows on Fri. and Sat., at 7:30pm, and Sun. at 5pm. Tickets are $15 ($12 for students) and can be reserved by calling 445-7213.