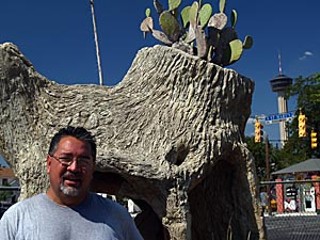 Carlos Cortés continues practicing the classic art of making concrete structures that look like they are made from wood. The San Antonio craftsman learned the intricacies of sculpting cement into the texture of bark from his father who once worked with the Southwestern master of el trabajo rustico, Dionicio Rodríguez.

In front of Cortés' studio in the King William National Historic District on the south side of downtown San Antonio, a workman twists and ties a chicken wire frame around an armature of rebar. Layers of cement will be added to the wire after it is fashioned into the rough shape of a bench, table, birdbath, or some other outdoor furniture. It isn't until the final coat of concrete that the object takes on the texture of logs and branches tied together.

"You want [the bark] to look realistic to a point," Cortés says as he runs his hand over the grooves that have the detail of knots and grain. "The more important aspect of the piece is the form."

Cortés says that the real genius of Rodríguez and his father, Maximo Cortés, was not that they could make the surface of the cement structure look like real wood bark but that they made the forms so natural. "You have to imagine how the tree grew from the inside; from the heart of the tree," he said.

The Mexican-born Rodríguez, Cortés' great-uncle on his mother's side of the family, was the master of creating what the French called faux bois, or fake wood, complete with worm holes, peeling bark, and notches made by a carpenter's saw. Rodríguez was very secretive about his techniques and was in great demand for nearly 30 years.

San Antonio's Brackenridge Park has five projects done by Rodríguez between 1925 and 1935. The arbor footbridge, thatch bus stop, and the gate into the Sunken Gardens were commissioned by the owners of the Alamo Cement Company. Rodríguez went on to complete major projects all over the country.

One of Rodríguez's few assistants was Cortés' father. "They worked together off and on for many years," Cortés says. "My father had a family, so he wouldn't travel. Dionicio was a bachelor most of his life."

Maximo specialized in ornamental concrete and artificial stone work around San Antonio. Cortés has a large wishing well and other concrete sculptures done by his father who passed away in 1997 at the age of 93. "I'm still amazed at the quality of his work," he said. After working in concrete for 20 years, Cortés doesn't think he is as good as his father yet. "He did some of his best work when he was in his 70s. I've got another 20 years to go before I reach that level of proficiency," he said.

Even though Cortés has done many high-profile pieces, including a concrete table for Martha Stewart and a bus stop two blocks from his shop, the high point of his career thus far came a couple of years ago when he did repairs to the footbridge in Brackenridge Park that his father and great-uncle built in 1925. "My father repaired it 40 years after it was built, and then I worked on it 40 years later. It gave me a real connection to my past," he said.

By repairing the footbridge and other Rodríguez originals, Cortés has learned a lot about the old construction techniques. "I don't think they thought about how long the pieces would last," Cortés says. He has found pieces of rock and brick in the pieces that were used as filler that are now the sources of cracks that weaken the structures. "But I still can't do a crisscross grain like my father and uncle," he said.

Cortés says his style of work is more like the French used in the 1860s with thinner branches and leather straps drawn in the surface. Almost all of his work is done on commission, and three-quarters of it is sold out of state. Cortés' work can cost several thousand dollars and weigh several hundred pounds, but you can see it for free at 1101 S. Mary St. or at www.studiocortes.com.