Stephen is deeply touched by a pack of racers headed north to Alaska – and no, it's not the Iditarod 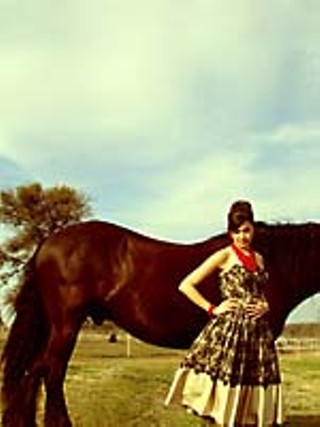 NONPROFITING I went to the Texas 4000 Tribute, Touching Lives: Austin to Alaska (www.texas4000.org) at the Austin Music Hall last Saturday because Kimberly Thomsen insisted. And even though I knew nothing about the event or the cause, I was really blown away by it. Of course I go to charity benefits all the time, and they're always for good causes, but this one really touched me. The Texas 4000 for Cancer is an annual bicycle ride from Austin to Anchorage, Ala. (!), in which riders, whose lives and loves have been touched by cancer in varying ways, raise money to help find a cure. It's actually about 4,600 miles to Anchorage, and the 43 riders in this year's event rode 60-70 miles a day through all kinds of weather and terrain. Honestly, I get exhausted driving my car across town, so I can't imagine riding a bike that far. Watching the video about the ride and the reasons for it had me weeping at my table like a baby. My date, Maureen Staloch, had to hold my hand, and I'm sure that if I'd been wearing mascara, it would have been all over my face. Sponsored by Sense Corp and company co-founder Brian Garsson, the ride attempted to raise $240,000 but actually beat that amount by more than $35,000, every penny of which went to cancer research. Whose life hasn't been touched by cancer? Mine has, and the event and the ride brought this home. I made a point of talking to as many of the riders as I could to tell them that I thought they were such heroes for doing what they did. Then we all had a great time with Trish Murphy, Johnny Goudie, and the K-Tel Hit Machine, who are certainly the hottest party band around here. Interestingly enough, the smoking area outside was the least crowded I'd ever seen it, but then again, it was a benefit for cancer… Also on the charitable front, the ÁQue Maravilla! event presented by Wonders & Worries (www.wondersandworries.org), a nonprofit dedicated to providing free services to critically ill children and their families, had its largest attendance yet. The party featured skeet shooting among the emus, ostriches, and antelope at the Texas Disposal Systems Exotic Game Ranch & Pavilion and raised more money for W&W than any of their previous events.

WITHER OSLO? The icy, Abba-esque chic of Oslo at Sixth & Lavaca is no more – but it took two bars to replace it. Hi-Lo is a Seventies-inspired lounge with video and live music, and Betsy's has a more vintage decor and recorded music from the Fifties through the Nineties. Like Oslo, the Hi-Lo and Betsy's are owned by the irrepressible entrepreneurs Matt Luckie and Daryl Kunik, who have changed the face of Austin nightlife by bringing us such entertainment and dining establishments as Lucky Lounge, Red Fez, and the famous sushi palace Uchi.

PRECIOUS JEWELS Collecting rare and unusual vintage jewelry is a true labor of love for Rhianna Rose Horan – and she's turned her love of it into a thriving business. Called Trouvé, which is French for "OMG, that's so freakin' hot!" (… um, actually it translates to: "has been found"), Horan's business supplies jewelry to a roster of private clients in her Clarksville studio (535-4168, www.trouvevintage.com) as well as to By George here in Austin, Abejas in Houston, and other boutiques across the country. Among the many notable women who come through By George's doors and have purchased one-of-a-kind Trouvé pieces are Sandra Bullock, Patty Griffin, Rosanne Cash, Mena Suvari, and Carla Gugino. With a degree in fashion marketing and a background in PR and advertising, Horan just returned from Ireland with a trove of new treasures. Among her newest acquisitions is a pair of 1850s Victorian solid-gold matched wedding bracelets and a pair of 250-year-old Georgian rose-cut diamond earrings. Trouvé looks for this fall season will include bracelets stacked on the wrist in several different looks including Victorian rose-gold and rolled-gold bangles or wide, art-deco rhinestone-and-paste bracelets.

AGENDA Thu., Aug. 31, 8-11pm, at the Firehouse Lounge (605 Brazos), ace photographer Dustin Downing presents Pawn Shop Camera & Expired Film, his first solo show of noncommercial work. Shot on the streets of pre-Katrina New Orleans, the work is raw and personal and is the product of lots of time and very little money. Downing's work has appeared in Texas Monthly, Stuff, and in this column… Wed., Sept. 6, 10am-1pm, at the Renaissance Hotel, Les Amis de Hospice Austin presents their Beauty of Life benefit luncheon with the fabulous Finola Hughes of General Hospital and the Style Network's How Do I Look? to celebrate Hospice Austin's 25 years of serving. More info at www.hospiceaustin.org.