Fresh off the hunt from Dallas Market Center's Holiday/Resort Show, your Style Avatar goes off on what's good about Austin fashion 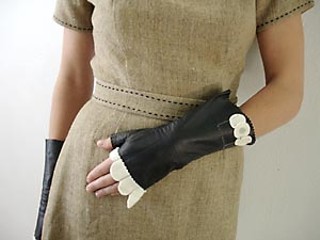 This vintage leather glove has been cleverly restyled and embellished by accessories designer Alyson Fox as part of her fall 2006 collection, available on her Web site now and in stores soon. (Photo By Alyson Fox)

BIG D We spent four days in Dallas for the Holiday/Resort show at the Dallas Market Center – an unforgettable exercise in fashion and culture. Whenever you hear about a small town in Texas and don't know where it is, it's a safe bet to say, "It's up near Dallas." And all of those small towns around Dallas have little stores with little buyers that go to the Dallas Market Center to buy for their stores. But it's not just buyers from Texas – it's Arkansas, Oklahoma, Kansas, Missouri, Kentucky, and even more mysteriously, buyers from overseas. When you hear the name Dallas, it often conjures up images of big hair. This is no joke, folks: It's big, bigger, biggest hair. Clouds of teased, damaged hair in every garish shade of blond and red, cemented into place for all eternity with gallons of hairspray. And these women are often toad-ish little creatures, with most of them wearing cropped cargo pants with drawstrings fastening them to their calves that are tucked into black or white cowgirl boots littered with studs and rhinestones. On top, they wore lots of lace, fringe, beading, and sequins, primarily in black but also in riotous colors of hot pink and turquoise. It was like the mothers of the Kilgore Rangerettes had all taken Ecstasy and looted a Wal-Mart. Naturally, not everyone in Dallas looked like that, but it sure makes you wonder how Dallas can be so snotty. But all was not a disaster; we ran into the lovely Liz Carrasco shopping for her store Jezebel and met showroom owner Rachel Jones of Austin, who carries youthful accessories and jewelry, including the work of jewelry designer Rebecca Berry of Dallas (www.rebeccaberry.com). We met some savvy and very successful reps who were incredibly helpful and got a terrific response on our clothing line.

EVEN MORE We've talked plenty about bad design in Austin; shall we talk about good design? We do have some very accomplished designers here. Of course we love Anthony Nak (www.anthonynak.com) – we've raved about their to-die-for jewelry many times (not to mention raving about Anthony Camargo and Nak Armstrong themselves, whom I'm privileged to count as dear friends). Working in gold and precious and semiprecious stones, they won the coveted Swarovski Perry Ellis Award for Accessory Design from the Council of Fashion Designers of America in 2005, and the walls of the Anthony Nak offices are lined with dozens and dozens of magazine covers featuring some of the world's most celebrated women wearing their jewels. They are one of the greatest success stories to ever come out of Austin in any field. We also have Kendra Scott's colorful and fun costume jewelry (www.kendrascott.com). Launched in 2002, she's had great success, and her jewelry was shown by Oscar de la Renta with his fall 2006 collection and is also sold around the country in such places as Henri Bendel in New York and locally at the Garden Room, Fetish, Adelante, and Grove Hill. In clothing, designer Linda Asaf (www.lindaasaf.com) turns out some of the smartest and freshest dresses in Texas. Having headed a large fashion company and studying at New York's Fashion Institute of Technology, she has dressed such icons as the late C.Z. Guest and Sotheby's Tiffany Dubin. Noted for classic silhouettes with edgy details, Asaf's fabrics are luxurious imports from around the world and have been sold at Neiman Marcus and featured in Women's Wear Daily. Currently designing in the lucrative arena of bridesmaid's dresses, her work is sold through Elle Boutique and Unbridaled, as well as on her Web site and by appointment in her new showroom and design headquarters at 1117 W. Fifth. On the accessories front, scarves, cuffs, and belts by Alyson Fox (www.alysonfox.com) are as delightful as they are original. The modest Ms. Fox is a powerhouse of design experience in many fields; she is an artist, sculptor, art teacher, art director, visual merchandiser, illustrator, graphic designer, and award-winning photographer … among other things. What a woman – and what a sense of design. Her scarves are clever little neck wraps of boiled wool and pressed felt that add humor and style to an overlooked accessory. Her cuffs (my favorite is a restyled vintage, black leather glove embellished with felt and buttons) pu t the fun back in functional, and her belts will charm the pants off of you – or something like that – and will be available in the fall at Eliza Page and Kick Pleat. She has a wonderful line of garter belts that are sold at Underwear on West 12th. On the horizon are a handbag line; a T-shirt line; knitted cuffs, scarves, and sweaters; and her photography work, which has appeared in Texas Monthly among other publications, as well as on her Web site and www.trouvevintage.com.