Is DIY design? Your Style Avatar weighs in ... like the 500-lb. gorilla in the middle of the room. 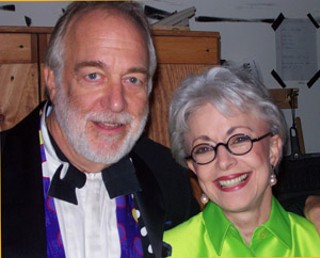 Howard Hessman and Karen Kuykendall backstage at the State Theatre for the 2003 B. Iden Payne Awards – the awards are another project of the Austin Circle of Theaters. (Photo By Dirk Van Allen)

MORE I've certainly been vilified as of late for not supporting local fashion. I do support local fashion: I just want it to be good. The current Do-It-Yourself culture has led many people to believe they are designers, but that is little more than self-aggrandizement. Picking up a guitar and plucking its strings does not make you a musician, and you're not a designer just because you say you are. You're a DIY-er. Different story. I know, because I've been both. I sewed badly for a number of years and called myself a designer, but it wasn't until I got serious about it, went to school for it, did my internships, and paid my dues in the industry before I could call myself a designer. When you understand the history of what you're doing, you don't have to keep reinventing the wheel. I'm not suggesting that people throw away their dreams, I just think they should do the work necessary to try and make those dreams come true. But if truth be told, gluing rhinestones on tennis shoes, making belts out of inner tubes, bracelets out of toothbrushes, and "cootie catcher" corsages is not fashion design. It is crafting, which is a fine and honorable thing, but it's not fashion. Let's call a spade a spade, shall we?

FAREWELL ROY'S As long as I've been in Austin there's been Roy's. In the mid-Seventies there were three taxi companies: Yellow, Roy's, and Harlem. Harlem Cab primarily served the Eastside, but when choosing between Yellow or Roy's, my sister and I always called Roy's. To us, Yellow Cab was like fast food, but Roy's was like eating at your favorite Mexican restaurant. Taking a taxi was a luxury back then. We walked everywhere and thought nothing of traipsing from my apartment on 27th, behind the Drag, to Friends & Lovers on Sixth Street – in platform shoes. In recent years it was easier just to call Roy's than try to park Downtown. They always seemed to have the coolest drivers and knew where everything was ... and several of them know secrets about me that I tipped them handsomely to keep. Many dramatic moments of my life took place in the back seat of a Roy's cab – from drunken foreplay to lovers' spats to a crowd of friends sitting on one another's laps to going home after a successful job interview, Roy's was always my ride of choice. Started in 1931 by Roy Velasquez Sr., son of Mexican immigrants, with a $5 loan to buy a 1928 Model T, Roy's had a policy of hiring black drivers and picking up black passengers during a time when no other cab company would do that. A ride across town was 10 cents then, and Austin was still a rustic spot along the Colorado River. And now, after 75 years, Roy's has turned off its meter for the last time ... another piece of old Austin gone from our cityscape.

LOVE THEATRE? Then maybe you should know about the work that Austin Circle of Theaters does. ACOT is a performing-arts service organization that provides marketing, ticketing, and capacity-building programs to over 120 theatre, music, and dance groups. ACOT members think of themselves as the ones who fluff the bride's train and arrange her veil before she goes down the aisle. They are the behind-the-scenes folks who provide so much for local theatre and related organizations. Can you imagine what Austin would be like without Austin Cabaret Theatre, the Rude Mechanicals, Salvage Vanguard Theater, the Vortex, Texas Early Music Project, FronteraFest, and Hyde Park Theatre, all graduates of ACOT's arts incubator program? ACOT provides AusTIX, a kiosk at the Austin Visitors Center for half-price and discounted tickets to performing arts events, as well as offering Texas Performs, a discount-ticket service online at www.texasperforms.com. They publish the comprehensive bimonthly Let's Go Austin cultural guide, as well as a weekly e-bulletin listing staffing jobs and casting calls. They handle Actors' Equity Association guest artist, special performance and umbrella contracts, as well as offering health care to its members. It's easy and cheap to support ACOT: All you have to do is love theatre. Membership costs $48 per year ($36 for students and seniors), and you can download info and forms at www.acotonline.org. ACOT needs your help; they do so much for Austin theatre, and Austin theatre does so much for Austin.

AGENDA Saturday and Sunday, Aug. 19, 12-6pm and Aug. 20, 11-5pm, at the Austin Music Hall, is the latest Le Garage Sale, featuring clothes from Estilo, the Garden Room, Octane, Shiki, and many more. Details are at www.legaragesale.net… Wed., Sept. 6, 10am-1pm, at the Renaissance Hotel, Les Amis de Hospice Austin presents their Beauty of Life benefit luncheon with the fabulous Finola Hughes of General Hospital and the Style Network's How Do I Look? to celebrate Hospice Austin's 25 years of serving. The über-glamorous Karen Landa is event co-chair, the tireless bon vivant Lance Avery Morgan will emcee, and Saks Fifth Avenue will present makeovers, giveaways, and shopping. More info at www.hospiceaustin.org.