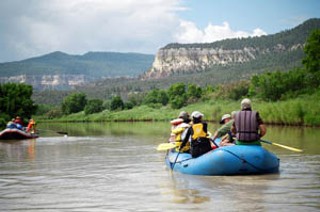 Note to my diary from somewhere on the Rio Chama: "I'm sunburned the color of a cooked lobster. My muscles ache from sleeping on the ground and schlepping camping gear into and out of the rafts. All my clothes are wet from the rainstorms that come with thunder that shakes the ground. What a great trip!"

All of my complaints seemed petty when compared to the grandeur of the canyons in central New Mexico that are accessible only from the river. The farther I went on my three-day expedition, the more spectacular the scenery got. The sandstone cliffs were a gallery of shapes and colors that only nature could create. Around every bend in the river a new masterpiece towered overhead.

The Rio Chama is not New Mexico's most popular river; that would probably be the Rio Grande. However, it is one of the most scenic, and it has rough enough water to be exciting but not too much to be out of reach for families. Declared a National Wild and Scenic River in 1988, the river is bordered by public land managed by the Bureau of Land Management and the U.S. Forest Service for much of the 31-mile stretch between the El Vado Lake dam and Lake Abiquiu northwest of Santa Fe.

The river stays open even during droughts because the dam releases drinking water and irrigation for Albuquerque after it joins the Rio Grande outside of Espanola. The recreation season for Rio Chama stretches from May to August, while the nearby Rio Grande has a peak season of only two months, beginning when the snow melts in May.

Weekend access to the upper portions of the Rio Chama is regulated by the BLM's Taos office with a lottery system that must be entered before January 1 (www.nm.blm.gov, 505/758-8851). Weekday access is by permit, but the water is released from the dam on weekends, and the river can dry to a trickle rather quickly. The lower portion of this stretch of the river is also open by permit and contains some of the most scenic cliffs and more rapids.

Those who make it down the river are treated to scenery that could have been painted by Georgia O'Keeffe, who lived in the nearby village of Abiquiu. The cliffs bordering the river are wrapped in bands of colors ranging from blood red at the bottom to shades of yellow near the top.

All this is framed by the green of towering ponderosa pines and gnarly mountain junipers that grow out of impossibly steep terrain. Combined with the clouds that roll across the sky, the magnificent rock formations seem much larger than the 1,500 feet from river to ridgetop.

The fifth largest state, New Mexico has no natural lakes and a set of water problems that illustrates the dilemma of the Western states. Federal, state, and city authorities jockey to meet the needs of an increasing population, agriculture users who were there first, conservationists who want to protect the wildlife, and recreational users. Water is the new gold of the American West.

And millions of visitors come to New Mexico every year to enjoy the winter snow and the summer snowmelt and run down the rivers. The state has turned outdoor recreation up a notch or two.

Few river experiences are as unique as rafting down the Rio Chama. With dam releases, the chocolate-milk-colored water can churn over rapids or be as smooth as water in a bathtub for long stretches. The Rio Chama has class two and three rapids, compared to class three and four rapids on the Rio Grande. Anything over a three is considered life-threatening.

The best way to see the Rio Chama Canyon is with a reputable outfitter that will supply rafts, inflatable kayaks, food, and gear. Far Flung Adventures was started in the Big Bend and has been taking visitors on New Mexico adventures since 1976 (www.farflung.com, 800/359-2627). Known World Guide Service also offers mountain biking and fishing trips (www.knownworldguides.com, 800/983-7756). New Wave Rafting Co. specializes in floating the Rio Grande but does Rio Chama trips four times a year (www.newwaverafting.com, 800/984-1444). For more information, contact the state tourism department at www.newmexico.org.