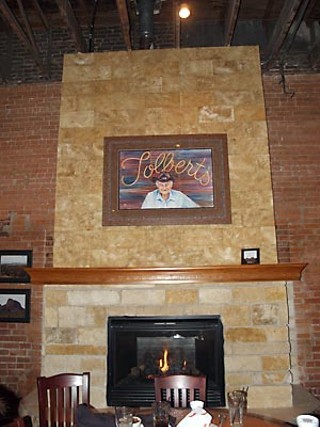 Firing up the chili pots (Photo By Gerald E. McLeod)

Tolbert's Restaurant in Grapevine knows chili. Owned and operated by the daughter of Frank X. Tolbert, the high-end chili parlor and steak house has a long pedigree in serving a bowl of red.

Tolbert didn't invent chili con carne – that was probably done by some cook on the South Texas prairie where beef was cheap and tough. The meat needed to cook a long time to soften, and the spicy chile peppers gave it some flavor. At the turn of the century, chili queens were selling bowls of their fiery concoctions in the plazas of San Antonio.

As a journalist and author who died in 1984, Tolbert brought chili into the 20th century. As a columnist for the Dallas Morning News, he took many Texas myths and turned them into American legends. His stories of the people and backroads preserve a colorful slice of the Fifties and Sixties.

With two Western novels and four nonfiction books on the Lone Star State to his credit, Tolbert claimed chili as a Texas original with the publication of A Bowl of Red (1962).

"When speaking of a bowl of red," Tolbert wrote in his humorous book on Texas cuisine, "I refer to chili con carne – honest-to-God chili, not the dreadful stuff masquerading as chili which is served in nine out of ten cafes. Real chili con carne is a haunting, mystic thing."

Tolbert and Austin's Four-Alarm Chili powder purveyor Wick Fowler joined the Chili Appreciation Society International to host a chili cook-off in 1967 in Terlingua. The first cook-offs were a competition between California and Texas cooks for bragging rights, and the Big Bend ghost town was about halfway between the competitors. Since the death of the two founders, the cook-off has opened to cooks from all over the world and is billed as the Original Terlingua International Frank X. Tolbert-Wick Fowler Memorial Championship Chili Cookoff.

Kathleen Tolbert Ryan learned the chili business at her father's side at the Terlingua cook-off and at the hole-in-the-wall chili parlor he opened on Main Street in downtown Dallas during the 1970s. After the family's operating two other restaurants in the Dallas area with partners, the new location on Main Street in Grapevine is a solo family operation.

The restaurant is definitely upscale compared to the original cafe in Dallas. Along with salads, the menu includes steaks, catfish, chicken, and hamburgers. Many of the dishes come with a layer of chili like the chili-cheeseburger, a chili burrito, and an honest-to-God Frito Chili Pie.

"We use my father's secret recipe for chili," Ryan says. There are several recipes on the Internet attributed to Tolbert, and he even published versions in his books, but Ryan insists none of them are the family recipe handed down from father to daughter and now to her two sons who work at the restaurant. "My dad had a lot of chili recipes," she says, "but he only had one 'secret' recipe."

Since the restaurant opened in mid-May, Ryan admits that they have had to tweak the flavor of the 75-pound batches of chili. "The hardest part is finding just the right meat," she says. "Since it's the main ingredient, it has to be just right."

Every true Texas chili-head will tell you, "If you know beans about chili, you know chili has no beans." So why does Ryan include chili with beans on the menu? "We've lived in Grapevine for 11 years, and I love it," she says, "but there are a lot of Yankees around here, and they insist on beans in their chili."

Tolbert's Restaurant is at 423 S. Main St. in historic downtown Grapevine. The kitchen opens daily at 11am and closes at 10pm Sunday through Thursday and at 11pm on Friday and Saturday nights. For information, call 817/421-4888 or at www.tolbertsrestaurant.com.

Ryan is the director of the CASI chili cook-off to be held in Terlingua, Nov. 2-4. For information on this year's events, go to www.abowlofred.com.