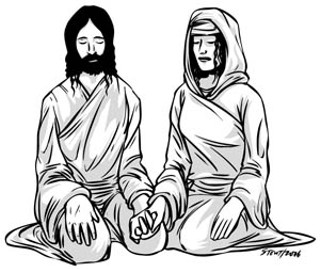 War vets testify that there's nothing more painful than a stomach wound, but author Dan Brown's novel The Da Vinci Code opens with the premise that a very old man with a slug in his gut, bleeding profusely, has strength and time enough to create an elaborate series of clues – and he drips blood only where it serves his purpose! Once you believe that, you're prepared to believe anything. Brown may be thanked for instigating millions to contemplate ancient mysteries, but the history of Magdalene is more mysterious than any pulp yarn.

Even our sources are few and mysterious. Jesus died somewhere between 27 and 35CE. The earliest complete manuscripts of the New Testament Gospels date from about 300 years later. Though we call them Mark, Matthew, Luke, and John and refer to their writers by those names, there is no hard evidence as to exactly when, where, or by whom the Gospels were written. Good circumstantial evidence exists (older manuscript fragments, references in ancient texts) for the hypothesis that Mark, Matthew, and Luke were composed 30 to 50 years after Jesus' death, and that John was written last, circa 100-120CE. We know that in their time they were not the only such texts, because Luke notes in his very first verse (New Revised Standard Version): "Since many [my italics] have undertaken to set down an orderly account of events that have been fulfilled among us, just as they were handed on to us by those who from the beginning were eyewitnesses and servants of the word, I too decided, after investigating everything carefully from the very first, to write an orderly account." So by Luke's time (circa 80CE), there were many written accounts of Jesus' ministry, but we have no clue about their content. We know many more were written over the next three centuries. Few survive. A compilation titled The Complete Gospels, edited by Robert J. Miller, includes 17 not found in the New Testament, dating from anywhere between the Crucifixion and 400CE. Several of these were lost for centuries until 1945, when Egyptian peasants found a sealed jar of ancient manuscripts in a cave near Nag Hammadi. Scholars call this the Nag Hammadi Library or the Gnostic Gospels. Among them are: the Gospel of Thomas (circa 30-150CE), the Dialogue of the Savior (circa 100-150CE), the Gospel of Philip (date uncertain), and the Gospel of Mary Magdalene (circa 80-180CE). Alas, those dates are only scholarly guesses. Like the New Testament Gospels, there is no proof as to exactly when they were written, where, or by whom.

One historical revelation of the Nag Hammadi Library is that some of the earliest Christians believed Mary Magdalene to have been Jesus' leading disciple. The Gospel of Thomas depicts the male disciples, especially Peter, angry and puzzled at the closeness of Jesus and Magdalene. There is no suggestion that they shared what we would call a "relationship"; but women were not treated as equals in that era, especially in religious matters, and Thomas shows some male disciples chagrined that Jesus treats Magdalene as their equal – for in Jesus' time, treating Magdalene as equal or superior to men would have been far more shocking, and more revolutionary, than knocking her up. Sexual dalliances, and warnings against them, spark the Bible, but the Bible depicts not one instance of a man and woman sharing friendship.

In the Gospel of Philip, the male disciples complain that Magdalene is the favorite of Jesus and that he often kisses her on the mouth. There is no indication that this is a lover's kiss. In some Mediterranean cultures to this day, friends (male as well as female) kiss each other on the mouth in greeting, in parting, or for a kind of affectionate emphasis. As Miller notes in The Complete Gospels (p.108), on the shores of the Mediterranean, "Kissing is the equivalent of a handshake in our culture." Again, Jesus is treating Magdalene as a close friend – shocking behavior back then.

In the Gospel of Mary and the Dialogue of the Savior, she is emphatically the foremost disciple, receiving privileged teaching that Jesus tells no one else. In the Manichean Psalm Book, the resurrected Jesus entrusts to Magdalene the task of inspiring the other disciples. The Dialogue of the Savior calls her "the woman who knew All." In the Gospel of Mary, Magdalene is resented deeply by Peter but defended by other male disciples. The Pistis Sophia also describes conflict between Magdalene and Peter, but Peter is rebuked by Jesus, who tells Magdalene that the Spirit ordains women as well as men. (Even Catholicism calls Magdalene the apostola apostolorum, "apostle to the apostles," reflecting these ancient texts.) Whether these writings go back to the life of Jesus or not, they are evidence that for several centuries after his death some Christians considered Mary Magdalene an important (even the most important) disciple. We don't know how many considered her so, but we know their contention was significant enough to be argued in writing.

The New Testament Gospels aren't shy about her importance. Mary Magdalene is one of the few people, and the only woman, given the distinction of what we would call a "full name." Others are Jesus of Nazareth, John the Baptist, Pontius Pilate, Simon Peter, Judas Iscariot, Simon of Cyrene, Joseph of Arimathea – crucial figures, obviously. Magdalene, whatever else she was, was crucial. She is the first to see Jesus risen in Mark, Matthew, and John, and in Luke she's the first to see signs of his resurrection – a unique position by any standard. In John, only Magdalene and the Beloved Disciple, of Jesus' inner circle, witness his crucifixion. Contrary to popular belief, nowhere in the New Testament or any other ancient gospel is Mary Magdalene referred to as a prostitute or a woman of loose morality in any sense.

Magdalene-the-whore is a tradition started by the Church centuries later. No ancient manuscript identifies Magdalene as the sinner-woman who washes Jesus' feet with her tears and hair in Luke 7:36-50; that identification was popularized centuries later by artists' renditions. All that is said in the biblical Gospels about Mary Magdalene by way of background is that she came from the town of Magdala and that Jesus cured her of possession by seven devils, as Luke records in 8:2, where he includes her among women traveling with Jesus. Thus from Luke we have it that Magdalene journeyed with Jesus for the greater part of his ministry, and we can assume her presence in the next 16 chapters of Luke's gospel – but we have no further data about her. Zero. None. As the eminent scholar E.P. Sanders writes in The Historical Figure of Jesus (p.75), "For all we know, on the basis of our sources, she was eighty-six, childless, and keen to mother unkempt young men."

As for Jesus and his family, Mark records no virgin birth and tells us in 3:21 that Jesus' mother and brothers feared he'd gone insane. Obviously, according to Mark, the mother of Jesus was unprepared for prophetlike behavior in her son – a very different mother from Matthew's, Luke's, or John's. In Mark his family expects normal behavior from Jesus, which indicates that for most of his life he'd been, in their eyes, fairly normal. Why else would they consider prophetic behavior so unusual as to fear insanity? One of Jesus' most famous utterances is "A prophet is not without honor, except in his own country and in his own house (Matthew 13:57, Revised Standard Version)." By his own account, his familial relations were troublesome.

We know from the Book of Acts and from Paul that after Jesus' death, his brother, James the Just, was the central figure of the earliest Christian church, in Jerusalem – even Paul tried (and failed) to please James the Just. The Gospels say Jesus had several brothers and sisters (how many is not stated). We can assume that descendants of Jesus' family walk amongst us today, but no source leaves a clue as to who they might be.

As for Magdalene ... shortly after the death of Jesus, she disappears from history. No gospel in or out of the New Testament says a word about her fate. We know only that for several hundred years there were Christians who revered Magdalene above Peter, Paul, and even Jesus' mother. Why? Any answer is speculation. All we know is that a Jewish woman named Miriam (Mary) – hailing from the village of Magdala, in what is now Syria – made quite an impression in an era when only royal women achieved honor among men.

She disappeared from history, not from legend. Magdalene is an irresistible legend.

My wise friend Naunie tells me, "Everything in the Gospels is happening inside you." Perhaps we keep Magdalene's legend alive because we need to see Jesus through a woman's eyes – an admission that we have no hope of understanding him through the male psyche alone. We know only that Magdalene was there. Imagining how she saw him is one way of touching the hem of his garment.