Stephen gets all judgmental and then recants. As usual. Who are his targets this week? 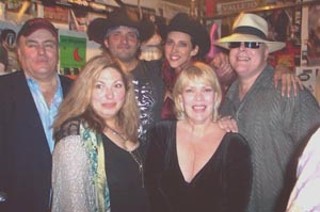 And then there was one: Clifford and Susan Antone; Robert Rodriguez and Patricia Vonne; Stephen and Margaret Moser. Three pairs of brothers and sisters and the bond that only death can break. (Photo By Carlos San Miguel)

DEAR SUSAN I've never known an Austin without your brother Clifford Antone. He was a personal friend, and I will miss him terribly. But it's you I think of tonight. Sisters are something I know about; I moved to Austin to be with mine, just like you moved here to be with your brother. I can't imagine how you feel right now. When I've tried to think about what it would be like to lose my sister, my mind just can't process that. There are no words, no images, no feelings for what it's like – just a shattering hollowness and emptiness that no one else could ever fill. It would be like losing a part of myself – someone that has been there practically every moment of my life; someone who knew exactly where I came from, how I felt, and why I was there; someone who knew you so differently than a lover or a friend. There isn't a person alive who ever saw you and Clifford together who couldn't see what a special bond there was between you. The two of you were almost one. And for all Clifford's friends so deeply saddened by his passing, know that they are all there for you too, loving you and being there for you in any way you need them. I know because I am one of them. All my love, Stephen.

PIERCED I'd seen them before, and they were cool. It was Jo Carol Pierce performing with her band, which was mainly cool because my sister Margaret's boyfriend is in her band. But last Tuesday on Margaret's birthday, Jo Carol was playing at Momos, so it was where we wound up celebrating. I'll pretty much go anywhere Margaret makes me, but Momos seemed to be a new low. With an absolutely hideous-smelling bathroom, some noise screeching from the speakers, and a cocktail that was truly vile, I'd have left earlier, except that Momos' staff was wonderfully friendly. At one point before Jo Carol took the stage I looked around like Neely O'Hara in Valley of the Dolls and thought, "What am I doing here?" But of course, I love Margaret, and she's dragged me across thresholds like the coffin-shaped door at the One Knite and the welcoming portals of the Armadillo World Headquarters, and I'm grateful for that. So I stayed. With a voice that can creak and crackle like a time-warped transmission from an ancient radio spewing words from outer space, Jo Carol is not exactly my cup of tea. I was already wondering if I could make it to the break in between sets when they'd bring out a blazing birthday cake for Margaret. But then something happened. They were a few songs into their set – they were doing this song about an "unknown sword," and Jo Carol was wailin' away like a tumbleweed angel. But there was something about the words that made me stop bemoaning my discomfort and realize the fantastic visions she was conjuring up with her words. Then the song slid into this instrumental break, with Jo Carol on the keyboards; her husband, the legendary Guy Juke, on bass; my sister's beau Mike Vernon on guitar; Bruce Logan on drums; and Mary Welch with additional vocals ... and I slid into nirvana. The sound rose from the ground like floodwaters around my ankles, and I just went limp, and the music swirled around me and washed my sins away. Jo Carol is Kitty Wells, she is the B-52's, she is Lucinda Williams, she is Patti Smith. But then again, she's unlike anyone else you've ever heard. She even made Momos pretty. I don't care if I get flamed because I've just "discovered" Jo Carol when she's been a local legend for years. I'm a late bloomer, you know … and a shrinking violet. But if you haven't seen her? Don't go with a bunch of beer-slammin' party people; go with someone who doesn't mind letting the performer onstage have her moment. Go and give Jo Carol and her fabulous band the attention they deserve. www.myspace.com/jocarolpierce.

MEA CULPA I apologize to Cathie Parssinen for being so mean about her two weeks ago in this column. While I still feel her review of my review of last year's Dennis Quaid fashion show was puerile and ridiculous, it was no excuse for me to savage her personally like I did. I went for her throat when I should have stuck to her work. I was out of line, and I'm sorry I did it like that.