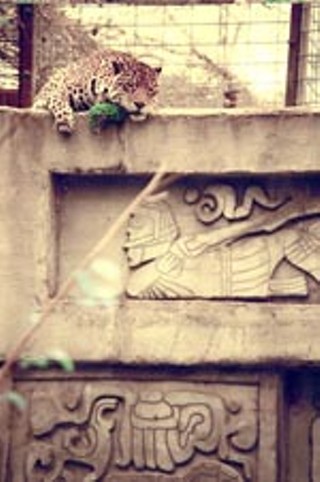 A leopard in Lufkin (Photo By Gerald E. McLeod)

The Ellen Trout Zoo in Lufkin uses the thick pine forest of East Texas to its advantage. The footpaths wind among the animal cages like a trail through the jungle. Around any corner there may be another creature of enormous proportions or unique appearance.

A city-owned facility, the 25-acre animal park is impressive for a community of 33,000. The collection of nearly 800 animals at the American Zoological Association-accredited zoo represents every continent except Antarctica, says Charlotte Henley, educational director for the institution.

"The zoo is here for the animals," Henley says. With the exception of a few animals that were rescued after an injury, all of the residents of the zoo are captive-born. In many cases, the species are nearing extinction and without the captive breeding programs would possibly disappear completely.

Henley says that the park is currently holding two rhinos for the Species Survival Plan, an organizational management of captive herds. "We're participating in 16 or 17 SSP programs," she says.

The zoo's breeding program has been very successful, with the birth of a hippopotamus last September. On display in the primate section of the zoo is the only breeding group of cotton-top tamarians. About the size of a squirrel, the black monkeys with white hairdos are one of the most endangered species of South American primates.

The staff is looking forward to births this summer in the giraffe, elk, and lemur exhibits. The Louisiana pine snake has laid a clutch of eggs. The most endangered of reptiles in the Southern U.S., the pine snake is a highly elusive native of East Texas. Chances of seeing these rodent eaters in the wild are slim because they prefer staying underground as much as possible.

The spotted Louisiana pine snake is easily found behind the glass in its home in the herpetarium, along with nearly 100 other snakes and lizards. But if you want to see one of the three hippos swim, you'll have to head over to the only Hippoquarium in the country. Only a glass wall separates the visitor from the paddling giants.

It was the hippo exhibit that started the Lufkin zoo's impressive collection. In the early Sixties, the community was debating whether to accept Walter C. Trout's generous offer of a zoo named after his mother. Trout, the head of Lufkin Industries, a local oil-field equipment and trailer manufacturer, offered to donate the land and pay for the park if the city would maintain it.

Citizens were hesitant about the offer because Beaumont, a considerably larger city, had recently closed their zoo due to financial problems, Henley says. The residents of Lufkin compromised on the agreement, saying the animals would be limited to native species. "I think the idea was that if the zoo failed, then the animals could be turned loose into the wild," Henley says with a laugh.

The Christmas before the Ellen Trout Zoo opened on June 17, 1967, Trout presented the city with a baby hippo purchased from the Dallas Zoo. "The hippos kind of opened the door for other kinds of animals," Henley says. The collection now includes lions, tigers, giraffes, birds from around the world, and a pair of komodo dragons born at the Miami Zoo.

The population of the park is not made up exclusively of immigrants. Native Texan species are well represented. There is a bald eagle, a red-tailed hawk, an owl, and a vulture. A white-tailed deer sticks its nose to the fence hoping for a handout. Brutus, an American black bear, was an abused pet that was confiscated by the Texas Parks and Wildlife Department.

The Ellen Trout Zoo is on the north side of Lufkin, on Loop 287 between U.S. 59 and FM 2251. Besides all of the animals, there is a snack bar, a gift shop, a fishing pond (license required), and a train that winds through the forest. The gate opens daily from 9am to 5pm, and until 6pm on Friday and Saturday during the summer. Admission is a very affordable $3 for adults and $1.50 for children. For more information, give the zoo hotline a call at 936/633-0399 or visit their Web site at www.ellentroutzoo.com.