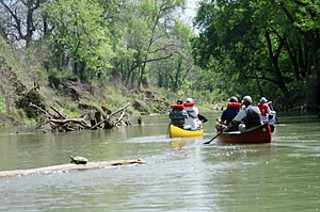 A river runs through it

The Luling Zedler Mill Paddling Trail follows the normally placid San Marcos River around the western edge of Luling. It is the first inland paddling trail of eight canoeing and kayaking trails in the state as designated by the Texas Parks and Wildlife Department.

The six miles of river winds in tight bends and turns along its route from U.S. 90 west of Luling to TX 80 south of town. The pleasant trip from park to park is an easy two-hour paddle through the scenic river valley. The 12- to 20-foot-tall river banks and thick riparian forest give the illusion of being miles from civilization.

Tight turns, submerged logs, the occasional sandbar, and trees scattered like matchsticks are the major impediments to the river channel. Sometimes the trip seems like an obstacle course to test the agility of the canoe's crew. With no serious rapids or dams to portage, this is an excellent place for a relaxed float for a novice paddler to learn the ropes.

The run is also pretty enough and technically challenging enough to keep experienced kayakers from becoming bored. The river is the beginning portion of the 260-mile route taken by the Texas Water Safari, the annual endurance race from San Marcos to the Gulf Coast that claims to be "the toughest canoe race in the world."

The current of the river is slow and lazy, except during the rare flooding. The water bubbles from the ground at Aquarena Springs in San Marcos and is kept at a pretty constant level by a series of small dams, even during periods of extended droughts.

About 75 miles in length, the San Marcos River joins the Guadalupe River above Gonzales. The 16 miles of river between the headwaters and FM 1977 attracts the most recreational use of the river. The new paddling trail, about 37 river miles downstream from San Marcos, draws attention to a lightly used portion of the river.

The water trail began as a project of the City of Luling – a town famous for its barbecue, roadside fruit stands, and Watermelon Thump – to save the old Zedler Mill. It became a joint project with the Guadalupe-Blanco River Authority, TPWD, and private organizations. The participants have purchased land and promoted the river as a vacation destination.

Built in 1874, the mill is the same age as Luling, and had been in the same family for more than 100 years. The water-powered mill was used to saw lumber, grind corn, mill cotton, and was the town's first electric generator. "We are once again harvesting the power of the river," says Randy Engelke, director of the Luling Parks Department.

The paddling trail begins at a small park under the highway west of town and ends at Zedler Mill across the road from Luling City Park with its nine-hole golf course, swimming pool, and picnic grounds. Free parking is provided at both ends, but there is no camping in this stretch of the river. Like much of the river, private property lines the bank except at the parks.

Engelke says the city hopes to develop the site. The old mill, with its rusting tin walls and collapsed roof, looks like the perfect location for a restaurant. "This area was under water in the 1998 flood," the city parks director says. "No restaurant operator in his right mind would want to put the investment into the property." It will probably become a museum of some sort in the distant future. A small house on the 9-acre property might be used as a restaurant or bed & breakfast, Engelke says. With a paved take-out ramp, the tree-shaded park is a pleasant place to end your journey down the river the Spanish called "Rio de los Inocentes."

There are currently no services at either end of the Luling Zedler Mill Paddling Trail, but TG Canoe Livery in San Marcos (512/353-3946, www.tgcanoe.com) and Spencer Canoes in Martin-dale (512/357-6113, www.spencercanoes.net) offer watercraft rentals and shuttle services.