Letters at 3AM: Effete!

It's never too late to see yourself as you are 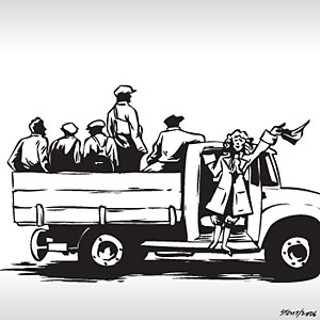 I suppose one arrives at a self-image by equal parts fate, chance, and intent – the fate of one's family plus chance influences, mixed with how one wishes to be. A self-image is fragile, vulnerable to others' opinions, yet also surprisingly sturdy. Once you have one, it tends to stick. It may be altered suddenly by something drastic, like an amputation; or slowly, by the inexorable attrition of aging. And, as I discovered recently, a self-image may change when one sees oneself with, as they say, "new eyes."

As a boy I was fragile, effeminate, or at least quite delicate. And different. At 10, I preferred reading the encyclopedia to playing ball, and I walked like Charlie Chaplin with my feet pointing in almost opposite directions. Using fists and jibes, kids made it painfully clear that how I was, what I was, wasn't going to cut it on the streets of New York. Westerns saved me. John Wayne's walk, Randolph Scott's glare, Richard Boone's manly elocution, topped with Elvis' hairdo – those were my keys to "cool." For two years I practiced in mirrors to perfect the walk, the slouch, the "line" of my idols. Had it down by 13. Walked tough, slouched tough. Then two movies were devastatingly influential: Elvis's King Creole, and Sinatra and Dean Martin in Some Came Running. When I watch those movies now I laugh till I cringe, cringe till I laugh – many gestures, even many lines, remain in my repertoire. But it worked. Guys stopped making fun of my glasses and womanish hands.

That was partly because of my act and partly because of the stare. I'd contracted a reckless compulsion to look straight into everyone's eyes and not relent until they looked away first, no matter how big they were, no matter what; it was my compensation to myself for being an inept fighter. Once I got the eye thing down, I didn't have to fight much. It stopped mattering that I was short and slight; most guys didn't want to test "the look." It was all a put-on. I was scared all the time. But presence is everything on the street (and in many another place). By 14 I'd learned presence – though I suppose what I really learned was how to keep my dignity in a place where dignity is always on the line.

Many a street kid can tell a similar tale – we must become actors to get the chance to be anything else. That's been the core of my self-image ever since: street kid – a cat who knows "the look." Somehow becoming a writer, a poet, and an intellectual didn't alter that self-image any, though I wonder how I'd walk, talk, gesture, or look at people if I'd grown up in safety, without the necessity of learning "the act." I'll never know what impression such a Michael Ventura would have made, with his funny step and delicate ways. Could he have gotten away with what I've gotten away with?

Sure, many didn't see me as I saw myself. Friends delight in pointing out how I didn't succeed as much as that street kid believed – didn't erase in gesture or attitude "the little prince" my mother tried to raise. She was a lady, and, though a Marxist, she didn't want her firstborn to work with his hands. He was to be an aristocrat, of the intellectual variety. Recently I was reminded that she succeeded better than I've been willing to acknowledge.

I was visiting Stanley and Rose Mary on their farm, in the home they built with their own hands, in the rough New Mexico mountains south of Taos. We were eating breakfast – Rose Mary's superb homemade granola – with their son Adam (in his 30s) and a man named Preacher. Preacher's about my age, Stan and Rose Mary a little older. Stan, Adam, and Preacher are big strong guys. They were preparing for a day of man's work: chain-sawing wood, working the farm, doing skilled jobs that require strength and make for calluses and sweat. Preacher told stories of his youth on oil rigs. They asked Adam about so-and-so, and Adam said, "The last time I saw so-and-so, he was shooting at me." Thereby hung a tale of river-rafting. Me, I was to drive to Santa Fe, to pray at the cathedral and go to the museums. But these men, they were about to do what I could not – for I have not one of their manual skills. I can't fix a car – can't fix anything. A chain saw would leap out of my hands. I can't raft a river and wouldn't want to (all that untoward moisture, you see). I sure couldn't build my own home, and wouldn't want to (all that fussing with objects, you see). As they talked, I asked myself, "What are my manual skills?" I can type, I can drive, I can work a remote. (I'm a good dancer, does that count? Not much, on a farm.) I looked at these men and thought of all they can do. Anyone shipwrecked on an island would much prefer their companionship to mine. I can't do anything! Except what I'm doing now: typing. It was then that the glaringly obvious struck me like revelation:

I almost blurted it aloud. Effete. I am. I'm effete. Two hundred years ago, a man like me would have been tolerated only within the very aristocracy that I despise. Workers of the Paris Commune would have checked my hands for calluses, found none, and beaten me to death with clubs. Some street kid. I'm effete. Ha! (That's the revelatory, not the humorous, "ha!")

I'm intellectual? No excuse. Everyone in that room was a well-read intellectual. I'm a writer, a poet? No excuse. Stan's a far better writer than me. Rose Mary's a good writer too, and she too can do far more than I. I'm sophisticated? Stan and Rose Mary are nothing if not sophisticated. My god. I'm effete. I have soft hands, and I want to have soft hands. For the essence of this "effete" thing is not only that I can't do manual stuff; it's that, much as I admire those who can, I don't want to do that stuff. I never have. Meaning: I'm dependent on those who can. Meaning: I'm an effete, fucking parasite. Marie Antoinette, baby, marry me!

Let's just say this socked my self-image. So much for being a tough, aging intellectual-with-a-touch-of-elegance street kid. Fucking effete. (The only one in my family! My father was an intellectual and a cabdriver. My surviving brothers are guys who can do stuff. My late brother Al was the best street fighter I ever saw. These Venturas have fine brains and manly hands. Some wench in my ancestry seduced a Sicilian prince. How else could I inherit this?)

The self-image thing was bugging me. I had to take a look at myself. So I watched a video: Surfing LA – starring effete me. Well, actually it stars the brilliant Jungian analyst James Hillman; John Densmore, drummer – formerly of the Doors – and author; and me. James, John, and I have been friends a long time. Hillman's idea was that we be filmed driving around Los Angeles and mouthing off. Unusual for me (being filmed, not mouthing off). But Hillman's friends, Kevan and Maria Jenson, are doing a series, "James Hillman's Fragments." When Hillman asked (he's influenced and mentored me), I couldn't say no – for which the ham in me was grateful.

Well, there I am onscreen. It's so painfully obvious I have to laugh. My blue jeans and cowboy boots – still in the thrall of those Westerns! My sports coat and fedoralike hat, with a feather in it no less – still entertaining delusions of Sinatra! I'm watching me and thinking, "A 14-year-old is running my life! He still selects my wardrobe." (That won't change; by now I wouldn't be comfortable in anything else.) Hillman's talk is original and provocative, John and I chime in for comic effect. I'm thankful that at least I'm not effete in the teeth – teeth discolored by cigarettes and endless cups of black tea. (But tea, see? Effete tea.) I watch me and think: "In a city context I look sophisticated, kind of. And why? Because social and technological revolutions allowed peasants to ape the aristocrats who've oppressed us. Is that all we really wanted? But look at that ring on my finger and those florid hand gestures, and, Christ, I hold a sandwich as though it's somehow beneath me. Put that guy on the land and give him some work to do? Forget it. That specimen can only exist as long as several million peasants do his work for him. Not only am I effete, I've become the enemy. And to think I started out as just another proletarian kid, a little dreamer. Alas. Effete."

Not that I'm about to learn new manual skills. I hate that stuff. But it's never too late to see yourself as you are. Then you have another drink and live with it. At least it's whiskey and not wine.

Surfing LA can be obtained, for a modest fee, at www.visualizethis.com/surfingla1.html

.
More Letters at 3AM columns