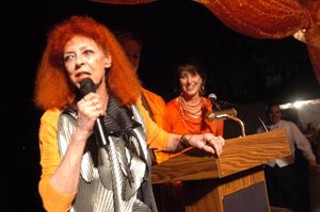 The irascible and illustrious Jean-Claude, partner of Christo, speaks to guests at the Art Ball X. Also pictured are gala co-chairs Jane Scott (behind) and Carol Wagner (right).

BALLS I was deeply afraid that the orange theme of the Austin Museum of Art's 10th Art Ball would resemble a formal Longhorn tailgate party. But I was wrong. It was glorious. The orange outfits arrived in hues ranging from peach to pumpkin, and the orange organza draping the tent gave a glow that made us all look 10 years younger. The orange theme was in tribute to the presence of artists Christo and Jeanne-Claude. In her Issey Miyake original ("I only wear Issey," she told me. "He delivers it to my home."), Jeanne-Claude had requested to meet me, and I was happy to oblige. Resembling aging Paris designer Sonia Rykiel with her fire-colored hair, Jeanne-Claude stood up during the auction and demanded that we be silent and respect the auction, since "Austin is a civilized city." Later, one woman stepped out of the grand port-a-potty and gushed, "I just got to pee next to Jeanne-Claude!" Little did I know that when my turn came, I would get to hear Christo pee in the next stall. So glamorous you could die. The real highlight of the evening was Grupo Fantasma's performance, during which a comedy routine began, featuring an actor portraying a Laguna Gloria neighbor irritated by the noise. But it was no comedy routine, and it was no actor. A bit after 10pm on this festive Friday, the bed-headed crank had taken the stage, grabbed a microphone from the singer, and began yelling, "My baby can't sleep! I have a wife and child, and we can't sleep! Shut this noise off! There is an ordinance against this!" The audience and dancers were stunned into laughter, and one of the Grupo Fantasma members used his microphone to ask for help in getting the irritable gentleman off the stage. The police did quick work of that, and five minutes later, the music, dancing, and revelry began again. At 11:30pm, the neighbor was seen still distraught in the back of a police car making a police report. Geez, this isn't the first band to ever play at Laguna Gloria, and this is the Live Music Capital of the World! Personally, I recommend a pair of earplugs and a white-noise machine, which is exactly how I deal with the rowing teams that come barking through their bullhorns past my Town Lake residence at 5am… Less scandalous, but just as beautiful, was the Austin Lyric Opera's Le Bal d'Opéra at the Four Seasons on Saturday. Opera is an acquired taste, and it is said that because it takes years to develop that taste, the average age of the operagoer is near to the midcentury mark. And yet this art form is not without its younger proponents – but they weren't a visible part of the population at the Opera Ball. The ALO does a wonderful job of bringing opera to Austin, but I'm going to recommend that they bring Austin to the opera. Like the HRC Dinner, my recommendation is that the gala committee set aside a little bit more money to hire a great band and have a terrific afterparty with a very affordable ticket price to bring in a younger crowd that might like to help with the fundraising but can't spend $500 on a ticket to the ball.

WALLS The owners of the new P&K Grocery (www.pkgrocery.com) on the corner of South Fifth and West Mary told me they'd give me a hard-hat tour of the store, so I looked up old photos of the Village People to see what I should wear with a hard hat. I opted for black chiffon and a tool belt. The outfit notwithstanding, the space will serve the neighborhood well with outdoor seating and a walk-up window for espresso, pressed sandwiches, and baked goods, while inside will offer everything from fresh fruits and vegetables, natural beef and chicken, milk and eggs, to wonderful cheeses, wine, and beer, along with candy, chocolate, magazines, newspapers, books, and paper goods. And you haven't lived until you've had their homemade Florentine cookies, which were on Austin Chronicle's Food Editor Virginia Wood's list of Best Bites earlier this year. In addition to catering, P&K offers gourmet picnic baskets brimming with goodies (and will even set up the picnic at your location), a service where they will spruce up your home, set your table, and supply dinner for you or your guests … while you get to concentrate on your own chiffon ensemble.