Neil Young, Jonathan Demme, concerts, films, SXSW, 'Heart of Gold,' a long, long day's journey into 'A Love Song of Elliot Roberts' – and that doesn't come close to even beginning

Neil Young: Heart of Gold (currently playing at the Arbor Cinema at Great Hills) is a conceptual collaboration between Young and director Jonathan Demme. The film (which had a special screening at SXSW 06) centers on Prairie Wind, Young's most recent album. Cinematographer Ellen Kuras used eight to 10 camera positions, shooting in a number of film and HD formats, to capture two evenings of Young's performances last August at the Ryman Auditorium in Nashville. Kuras' work has always been both truly imaginative and uniquely suited to the project: No Direction Home: Bob Dylan (2005), The Ballad of Jack and Rose (2005), Eternal Sunshine of the Spotless Mind (2004), I Shot Andy Warhol (1996), and Summer of Sam (1999). Heart, an insistently cinematic celebration, is an almost textbook exploration of film vocabulary – but a textbook that is visionary, passionate, and audaciously rendered. Shot in a catalog of colors that evoke classic three-strip Technicolor, Heart is a near-hallucinogenic daydream of rich shades and deep pastels. The film, which never calls undue attention to its artistry, quite deliberately reconsiders Stop Making Sense, Demme's earlier performance film, in an Alice-in-Wonderland, Through the Looking-Glass, reflective reimagining. Leisurely rather than focused, a meditative consideration instead of a bullet to the head, building performance, the film still achieves the seamless combination of every tool of cinema with every tool of music into a cohesive, interwoven work. There are precious few audience or moving-camera shots. There is narrative, though the film is of a concert performance; there are richly detailed characters, though they are only seen performing. Heart is an overwhelming romance, but only in the subtlest, most nonlinear ways, lacking all hint of melodrama.

Heart ends with Young, alone on the stage and seemingly alone in the Ryman (obviously, a cinematic conceit). It is the end of the evening; the concert staged earlier is over. When Young finishes, there is no applause. He puts his guitar into its case, snaps it closed, and walks off into the shadows. As Rollo Banks used to say, Young may be an artist, but he also is a guitar operator: it's his job – one loved and cherished, but still work. It's the way he puts the guitar in the case and closes it. The way he walks off stage into the literal dark but, having just watched the movie, we know this is a walk forward into the rest of his life, his family, and his work. As it is now, so it has always been, day following day.

The evening was of the new and the old. The first half of the show was all Prairie Wind, followed by a generous assortment of older songs (mostly from Harvest and Harvest Moon). This was the first time all of Prairie Wind was performed live, but Young invited Emmylou Harris to join him while surrounding himself with cohorts; most of them had been playing together, in one way or another, for decades. Still Pegi, Young's wife and backup singer, was featured in a way I don't remember her ever having been before. The performance was rounded out with Wayne Jackson of the Memphis Horns, the Fisk University Jubilee Singers, and the 12-piece Nashville String Machine (featuring six Stradivarius violins).

Prairie Wind features all new songs, but it is a looking-back (as well as forward) – an expanded, annotated consideration of Young's career so far. Which is not to make it sound pretentious: The album is joyous and sobering; as you listen, it sinks into your skin until you are enveloped in it, as though these experiences were all your own. In so many ways, this is because they are. Young is not a reporter, essayist, linear historian, nor a deliberate or factually conscious chronicler. A poet, a voice of people and time (sometimes from among them, sometimes from so far outside), Young is an abstract biographer and metaphoric historian who marries the past, emotions, personal history, detail, zeitgeist, and the present into something that can be listened to endlessly but hardly explained.

As it was that night, so it was in the beginning. Sitting alone in a room, maybe on a chair, maybe the bed. Playing the guitar, all the time playing the guitar. The room is empty except for Young and his guitar. Putting his guitar into its case after endless days of playing, Young will walk out the door. More and more, he won't be playing alone but in a variety of clubs, with different musicians, in different bands. Except at first it wasn't really musicians. It was kids playing guitars in bands. There was the work, but the glamour was relatively insignificant.

Young walked out – of that room, his mother's house, those clubs – into his future. Four decades later, he is where he was at the beginning, alone on a chair, playing his guitar and singing. A guitar operator and music worker, his wife, extended family, fellow musicians, cohorts waiting for him offstage. I imagine that there is no other place he'd rather be and nothing else that he'd rather be doing.

Leaving the auditorium, for Young, is like leaving has been so often, marking beginnings rather than endings, indicating the strengths of what was in his life, as well of the possibilities of things to come. "Leaving" is the wrong word because, in the most important ways, it was never about leaving, but about discovering. Rather than waxing nostalgic over, looking back at, or abandoning the past, Young's steps quicken as he is focused on the future: on to the new, the untried and untested, exploration, invention, and innovation, rather than any hint of assembly-line production.

As it has been for more than two decades, Young's life is anchored in his relationship with his wife, Pegi, and his family. When they are together in the film, it becomes a love story, a valentine. The way that Neil and Pegi look at each other, after sharing more miles between them than most of us have even tried to travel, is timeless – as well as of the past, present, and future.

Young's career has always been more about pursuing new ideas rather than emulating old successes. Still, early last year, Young was in the second year of feeling as though he was written out, his creative ideas so slowed that he was planning on turning all his attention to the long talked-about and so often delayed, mammoth retrospective set covering the entire career.

A mere five months prior to this outing, Young was told he had a brain aneurysm, and Prairie Wind resulted during the week between diagnosis and his undergoing surgery. He had begun to record it in Nashville, working right up to the night before his operation. It could have been the last evening of his life. If it was, he wanted it to be just as the rest of his life: devoted to making music. It wasn't.

Last week's "Page Two" was an open letter – a deeply genuine "thank you" after SXSW, from me to the people of Austin. But the two weeks before that is when I began to write this column. Intuitively, I know where I want it to go but have little idea of its form in a conscious or sequential way. I want to call it "A Love Song of Elliot Roberts," but I've done more developing of a small strip shopping center miles away than laid any of the foundation for that these past three weeks. Roberts is a music-business and music legend who has been Young's longtime manager. I'm aiming at trying to talk about art and commerce, love and subsistence, life and fiction – not as distinct entities, but rather the effort is to erase boundaries, because any specific categorization is a self-indulgent fiction. I want to talk about Bob Dylan and Neil Young, of bodies of work that have always been treated as distinct entries when they are actually inseparable wholes. There is the story of how things get done and what they mean. These are divorced from the simplistic, self-serving, sophomorically romantic trivializing of culture, popular culture, and music by most, despite the broadest range of differing critical and social positions.

One of the threads I came across while scanning the SXSW forums was posted by someone offering up for discussion as a topic "Why bands sell out." As with many other terms – such as "nepotism," "overpaid and underworked," "getting special privileges," "overly and wrongly appreciated," "morally corrupt," and "whorishly dishonest" – "sellout" is a gift appellation: one that is almost always attached to others rather than offered up about oneself.

Usually "sellout" roughly translates into some combination of the following:

1) On the new album, the band is doing exactly the same kind of material it has always done. 2) The new album is completely unlike anything the band has done before. 3) I'm tired of the old sound. 4) I don't understand the new sound. 5) They are making lots of money; I would stay true to the music and never do that. 6) We were into this band before almost anybody else had ever heard of them, and/or liked them (a lot of time is spent considering how smart one is for getting them and how dumb everybody else is for not), and that now has at last become very popular: "What sellouts!"

And so on. In different words: One's career, decisions, compromises, and experiments make sense to oneself – but in the eyes of others, it is "selling out," which is the worst sin. Often the others have never entertained any kind of offer that might be considered "selling out," but as sure as the sun rises tomorrow, they know how they would act. "Sellout" tells us much more about the speaker's self-righteous self-indulgence than it does about culture, commerce, creative decision-making, and/or compromise.

See, to get close to talking about Elliot Roberts, I have to transverse the engulfing, judgmental swamps of lazy thinking and knee-jerk, stereotypical anti-capitalism of the young and addictively self-important. I have to talk about Neil Young and Jonathan Demme, to consider perception and reality, to enumerate the distinctions between "self-righteous" and "righteous." The at-least casual vilification of almost anybody doing anything has to be entertained.

Consider this column just another day in the more mundane swamps of biting insects, brackish water, quicksand, and vegetative putrefaction. 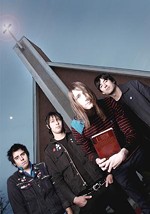 Let It Bleed
The Riverboat Gamblers take aim at their enemies