Nowhere in the state takes more pride of its dogwood trees than Palestine, and nowhere can you find a greater concentration of the blooms than in Davey Dogwood Park 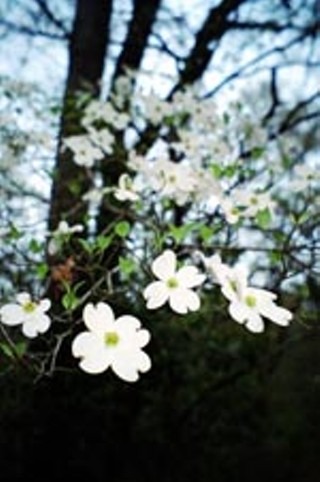 The dogwood blooms dance in the breeze among the leaves like white butterflies tethered to the trees. Nowhere in the state takes more pride of its dogwood trees than Palestine, and nowhere can you find a greater concentration of the blooms than in Davey Dogwood Park.

"It looks like it's going to be an OK year for the dogwood blooms," says Mary Krause at the Palestine (pronounced "palace-steen") Chamber of Commerce. "The redbuds have begun to bloom, and I don't think the drought is going to reduce the dogwoods by much, if at all."

The gnarly dogwood tree has a tremendous range over the southeastern United States, going as far north as southern Maine and dropping down into Illinois and East Texas. Palestine is about as far west as the trees' natural territory goes. Considered a fast-growing and short-lived tree, the dogwood is often planted as a small ornamental tree. The hard, smooth wood is often used for tools, especially shuttles for textile weaving.

The flowering dogwoods are an extremely valuable plant in nature. The seeds, fruit, flowers, twigs, bark, and leaves are a major source of food for many animals. The high calcium and fat content of the fruit, which is poisonous to humans, is beneficial to more than 36 species of birds, plus small and large animals.

Legend has it that the dogwoods were once large and stately trees. The dense and heavy wood was used to make the cross that Jesus died upon. Seeing the distress that the tree felt, God decided that the dogwood tree would never again grow large enough to be used for such a cruel purpose. From then on, the flowers were formed with two long and two short petals to form a cross. In the center of the outer edge of each petal, a nail hole is stained with red. In the center of the bloom is a cluster that resembles a crown of thorns. The delicate flowers appear each year just before Easter to remind us of the story.

Mixed among the towering canopy of pine and oak trees, the dogwood favor the edges of the forest, where they can get good sunlight and easily be spotted from highways. "You can spot the white flowers off almost any county road," Krause says. She recommends FM 315 heading north from Palestine and FM 294 going southeast out of Elkhart in the southern part of the county as scenic, backroad drives.

The largest concentration of dogwood blooms can be found in Davey Dogwood Park north of Loop 256 and North Link Street. The narrow road through the 200-acre park is a roller-coaster ride winding up and down the steep hills. The picnic areas in the box canyons are full of trees sporting the white blooms.

Another great way to see the dogwoods and other flowers of East Texas is a ride on the Texas State Railroad between Palestine and Rusk. The restored steam engines and antique coaches travel the 25-mile route through some of the most beautiful and unspoiled countryside in the Pineywoods.

Operated by the Texas Parks and Wildlife Department, the Palestine depot was narrowly saved from closure because of budget woes for this year. The vintage train runs from mid-March through September, tickets are $17 for adults, and kids ride for free on most Saturdays and Sundays. The required reservations and information can be obtained at 800/442-8951 or at www.tpwd.state.tx.us.

Established in 1846, Palestine really began to grow when the railroad arrived in 1872. The Anderson County Courthouse was built on the highest hill in the area and is worth a self-guided tour. The town has gone through three different growth spurts over the years. The first one happened around the courthouse, and the old buildings have been remodeled for antique shops, a coffeehouse, restaurants, and the famous Eilenberger's Bakery at 512 N. John St. The town grew toward the railroad yard at the bottom of the courthouse hill until the automobile took over, and now Loop 256 has spread the business district along it's northeastern corner.

Palestine is about 160 miles northeast of Austin. For information, call 903/723-3014 or point your Web browser to www.visitpalestine.com or www.palestinechamber.org.