It's hard out here for a Style Avatar, especially after all those DHOHs at the Oscars! 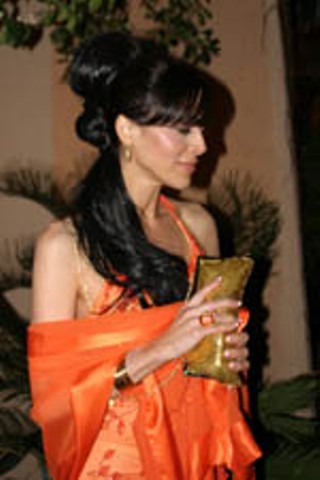 The magnificently beautiful goddess Victoria Marasco (One World Theatre board member and partner at MDS Advertising) sporting the most gorgeous gown, jewels, and grooming. Hair by the wonderful Edward at Mint, and styling by MDS partner (also OWT board member) David Hubbard. (Photo By Chris Patunas/Tribeza)

LET US PREY Most. Boring. Oscar. Presentation. Ever. Like most trends, the rage for pale lips at the Oscars was not for everyone. Especially Sandra Bullock. Sandra, we love you, but your make-up person should be arrested for sending you out looking like that ... but we liked your dress anyway. Miss Bullock was the winner in the DHOH (Did Her Own Hair) category, narrowly beating out Hilary Swank, Catherine Keener, and Frances McDormand. J-Ho looked like she was made up for Brokeback Mountain, and her husband Gomez Adams, I mean Marc Anthony, looked as cadaverous as Uma Thurman (the pale lips thing again). But you could practically hear J-Ho guffawing from the audience when Jennifer Garner nearly wiped out while making her entrance. Felicity Huffman lost for Best Actress, but won for Worst Dress, narrowly beating out Charlize Theron. Keira Knightley looked faaabulous. A thought: "Over the Rainbow," "Moon River," "Evergreen" … and "It's Hard Out Here for a Pimp." On the E! aftershow, did one of the tennis-playing Williams sisters really say Phillip Semen Hoffmore?

SOCIAL DIARY From the "Thank You" fundraiser for Houston's Rep. Senfronia Thompson at Dennis Karbach and Robert Brown's home on Congress, to a glamorous whirlwind trip to Houston, to the One World Theatre Gala, we begin the Spring 2006 Social Olympics, taking us on a wild ride through the Swish Alps. Rep. Thompson has a large group of supporters in Austin, due to the fine work she does for the black, Hispanic, and gay and lesbian communities in Houston. Her battle against discrimination has ripple effects across the state, and we are very lucky to have her fighting for human rights… Last Saturday, Rita Garza and I attended the One World Theatre Gala, featuring the Doobie Brothers. Now, it can definitely be said that the Doobie Brothers were not the big draw for me, but the theatre itself and the good works done there by founders Hartt Stearns and Iluminada definitely were. OWT is a true Austin treasure, and a perfect little jewel box perched on the side of a cliff on Bee Caves Road. The food, from so many fine Austin restaurants was marvelous, and the entire evening was beautifully presented. The only sour note was the inexplicable barrage of gay-for-pay and Brokeback Mountain jokes coming from the auctioneer – that kind of tastelessness is completely unworthy of the One World Theatre and its mission, not to mention at such an elegant event. Otherwise, it was a perfect night, and we communed with Sam and Gigi Bryant, Marilyn Johnson, and the stunningly lovely Colibri Evans. Favorite moment was the star-making entrance by goddesslike OWT board member Victoria Marasco, co-owner of MDS Advertising.

HELLTOWN While a trip to Houston couldn't really be called globe-trotting, I felt like I traveled to another planet. Mark Sullivan invited me down for the opening of his partner Ceron's new salon, Jose Eber Ceron. The extraordinary make-up artist Edward Sanchez is also a partner in the salon. Ceron and Jose were brought together by the fabulous Becca Cason Thrash, whom I adored seeing again (I'm dying to hear how she and Carla McDonald enjoyed the Elton John Oscar Party!). The salon is heavenly, as you would expect, and the party was incredible, hostessed by Becca and her friend Jaclyn Smith. With the starlight sparkling through the crystal chandeliers strung along the patio, I was entranced by chatting with the unbelievably gorgeous Jaclyn. Carolyn Farb was also in attendance – dazzling in her turquoise and diamond demi-parure formerly owned by movie goddess Merle Oberon. I had traveled down with Mark's close friend from Austin, Christine Johnson, and we shacked up at the Four Seasons along with John and Elizabeth Pecor of Austin's soon-to-open P&K Grocery. My favorite finds were my NBFs (next best friends) Doug and Jennifer Bosch, who own the sinfully luxurious ranch resort, the Inn at Dos Brisas (www.dosbrisas.com) in Chappell Hill outside of Brenham, two hours away from Austin. The two of them seem to fly under Houston's radar, but I can assure you that they will be well-known in Houston and Austin very soon. The night ended with a marvelous afterparty at Houston's iconic Cafe Annie, where we hung with Austin's Alfred Robinson, and his Houston friends Debra and Mark Grierson. The next day, Christine, Alfred, and I had lunch with Carolyn at the Grotto.

DO-GOODERS Texas' own Oscars happen at the Texas Film Hall of Fame, Friday, March 10. Expect a full report… Octopus Club's ArtErotica attracted 500 attendees and raised $20,974!… Go to www.hrcaustin.org for tickets and other info about the annual HRC Gala on Saturday, March 18, featuring the wonderful Jennifer Holliday.