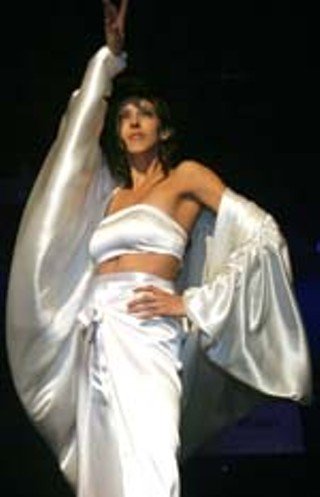 Patricia Vonne sizzles with white heat on the runway of the Made in Heaven fashion show. (Photo By Carlos San Miguel) 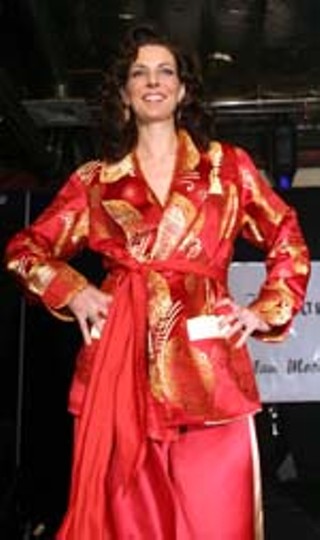 CATWALKING It would be awfully recherché for me to review my own fashion show, n'est-ce pas? But we kicked ass. Yes, yes, there were a few glitches (who knew that dress could be worn sideways?), and of course we ran late, but the models made the clothes come alive on the runway, and it was a dazzling presentation of brilliant color and luxurious fabrics. Patricia Vonne was magnificent, working the stage like a silent movie queen; Carla McDonald was cool elegance on the outside with burning fire inside; Eloise DeJoria was positively jaw-dropping; Karen Sexton flawlessly catwalked; and Julia Smith was chic and adorable. My guys, Anthony Camargo, Phil Hudson, Robert LaRoche, and John Livingston, were sexy and sizzling, but when Will Wynn hit the runway in his smoking jacket and bared his chest and shoulders, the audience screamed (you could just hear Rebecca Campbell leading the pack). To me, the most important part was having the assistance of Midi Soliz, Antoinette Sales, and Linda Asaf; without the expert help of all of them, there would have been no show. Thanks from my heart to all who made the night a huge success.

SOCIAL DIARY Recovering slightly from my post-show stupor, Saturday night was a full schedule of socializing. We began the night at the staggeringly stylish four-story home of droolingly handsome Long Center board member Dennis Karbach and his gorgeous partner, Robert Brown, drinking the house cocktail, the 811 (vodka and Fresca). They're so happy, so in love, and live such a beautiful life that it's almost revolting. And it's simply not fair, when I so richly deserve that kind of life. But I adore Robert and Dennis so much that I plan on going there as often as possible to pretend that I am the mistress of that maison! (I can imagine myself in a feather-trimmed peignoir while addressing the butler on the intercom, "James, bring another 811 to me on 4, please.") Cliff Redd attended with me (could I ever ask for a more attentive or more presentable escort?), and we were joined by Gary Cooper (looking younger than springtime these days) and Richard Hartgrove, who brought the world famous violist John Largess of the Miró Quartet with them. After that, it was off to Brilliant magazine's Little Black Book Party, an event studded with localebrities, socialebrities, and paparazzi. Dazzling. We communed with so many of Austin's beautiful people that I can't even begin to mention them. It was there that we met up with Mark Sullivan and Ceron. Ceron's to-die-for new salon, Jose Eber–Ceron, is opening in Houston next week with a party being given by Becca Cason Thrash and Jaclyn Smith (Farrah Fawcett will be there – a rare sighting of two of the three Charlie's Angels). Accompanied by Linda Asaf, we made a quick round of Thistle for the Night in the Galleries afterparty, visiting with the Statesman's Jean Scheidnes (thanks for coming to my show, Jean!), among others. From there, we jetted off to the ArtErotica party, arriving at 11pm. Why am I always so late for this fabulous event? But there were still plenty of terrific guests to visit with, and all the art was still hung (I desperately wanted to buy Seabrook Jones' Pussies, a Warhol-like repetition of pictures of Jones' cat), and most importantly, many of the divine desserts that are the highlight of the event were still around. It appeared to be the best year yet for ArtErotica. Then I insisted that my peeps (I know, it's getting easier to say that word) have more 811s at Dennis and Robert's before Cliff used a bulldozer to get me into his car and take me home. Well, I did have a lot of socializing to catch up on after being a recluse while designing my show.