"Loss is nothing else but change, and change is Nature's delight."

So wrote the Roman Emperor Marcus Aurelius (died AD 180). "In time," he continued, "Earth, too, will change; later, what issues from this change will itself in turn incessantly change, and so again will all that then takes its place, even unto the world's end."

If loss is but change and change is Nature's delight, then, despite appearances, we live in an epoch delightful to Nature – a time of drastic loss and change.

Our stumbling block in perceiving this epoch as "delightful to Nature" is the word "unnatural." "Nature" designates a fact – existence itself; but "unnatural" is only a concept – the idea that some (usually man-made) occurrences are against Nature. Yet the human psyche itself is a product of Nature; to create or do anything, it must employ the elements of Nature; so how can anything "unnatural" happen or even exist? The very fact that a person, thing, or event, exists within capital-N Nature proves it is natural, because it is what it is made of, and it is made of Nature. Plutonium, a Coke can, a city, man-made global warming – much as one may hate to admit it, they're not unnatural, because they're something Nature itself (as expressed in humanity) is doing. What we do may unpleasantly or even disastrously change the status quo of Nature on this planet; but, since humanity is a product of Nature, anything we create or do is a further product of Nature. We are Nature doing something to itself.

Many environmentalists won't like that statement because, consciously or unconsciously, they define Nature as Earth-without-humanity. In that view, Earth is a pure state, and humanity's cavortings upon Earth are or can be unnatural – a view that agrees with our major monotheisms, all of which contend that humanity and Nature are two different things. The idea that humanity is somehow outside of Nature is either a way to set humanity above Nature, as in Genesis and the writings of Sir Francis Bacon and Descartes (writings upon which our scientific method is largely based); or else, a way to see Nature as all good and humanity as an intruder or a guest, as the environmental movement and many earth-worshipping religions often believe. Others twist this separation of Nature and humanity such that they believe human beings can perform acts that are "unnatural" – homosexuality, for instance. Again, I would say that if it's possible, it's natural, a state arising out of Nature, or else how could it exist?

Nothing exists outside of Nature. Our mistake has been in defining Nature as anything less than all that is. When we say, "This is Nature, and this is not," we're just picking and choosing according to our ideologies, desires, and needs – in other words, a power play to make life behave as we may wish it to behave. That it never does is life's answer to our machinations.

Tribal peoples the world over (and mystics like Saint Francis) believe differently, feeling that humans and animals, and even the elements are related by birth, brothers and sisters of the same family, each with a necessary function, some more complex than others but none higher or lower. I too believe this, and it sounds like a sweet concept until you start thinking about "family" in real terms – your family, my family – then things get dicey, or at least not sweet and simple. Yes, we may all be a family, but families have problems too. Families, in my experience, tend to get out of hand and are rarely satisfied with the status quo. (Could it be that the very existence of humanity indicates that even Nature is never satisfied with itself? Or are we, not the Word made flesh, but the principle of Change made flesh? The principle of Change given consciousness? Many dislike change, yet, as individuals and as a species, it's really all we do. We don't know how not to do it. So change may be what we are, like it or not.)

The familylike tribal view survives in how people of all persuasions speak of "Mother Earth" and assign gender both to Earth and to God. God the Father, God the Great Mother, Mother Earth – beautiful concepts in many ways, but these metaphors reject complexity and leave one prone to the simplistic. Do I really want the Earth to behave like my mother – brilliant, beautiful, wondrous, sexually invasive, and prone to psychosis? (Gee ... Earth kinda does behave that way.) Do you want the Earth to behave like your mother? That something as complex as this planet – with its slugs and whales, rocks and cerebral cortices, mountains and viruses, and more kinds of everything than we've yet catalogued – could have a single gender, is less than metaphor and more than simplification; it's a denial of the world we actually live in. Is God a "he" or "she"? Drive into the desert and gaze at the millions of stars and call that a he or she! The universe doesn't have a gender. Nature, of course, is inclusive of the universe; and so, presumably, is God; both are too vast for gender.

Either Nature has a kind of consciousness, and therefore a purpose, or it does not. In our present state of development, there's no way to know. It's my experience that Nature – whether metallic (like my car) or organic (like a plant) or neither (like the wind) – behaves differently if one relates to it as though it is conscious; many have experienced consciousness in rocks, flora, fauna, and objects, but our subjective experiences are difficult to demonstrate and impossible to prove. If Nature has no consciousness or purpose, I don't see how humanity can, so I choose to believe we all do. That's my sense of things. Again, impossible to prove, especially when the evidence appears to point the other way.

Humanity, as I've said, is an exceptionally strong force of Nature. We like to think we are a conscious force. As individuals, perhaps that's true; as a species, perhaps not. We should be pouring all available resources into saving and stabilizing our environment, for one simple reason: If we did so, in the long run we'd probably be happier. But we don't do so. Not forcefully, effectively, as a species. We are, in fact, the only species that intentionally behaves so as to hurt ourselves (rationalizing such behavior with ideology or theology or whatever). Thus, on a biological plane, we may be expressive of the madness of Nature – for if the human species, a product of Nature, can behave insanely (defined as intentionally mutually destructive) then insanity too is part of Nature's repertoire.

Looked at this way, humanity is presently functioning as a kind of storm. Individually, we cry out against the storm that we are. Collectively, we speed around in automobiles, invent and employ all sorts of nasty things, slaughter fauna and flora on an unthinkable scale, and ignore the danger signs that we at the same time are constantly reporting. Individually, we're raindrops in a storm. Collectively, we are the storm. It wouldn't be the first time that Nature employed a part of itself – volcanoes, floods, meteors – to wipe the slate clean and try again. This time, maybe Nature is using the part of it that is us for this inexorable, regular, natural slate-cleaning.

Wrote Marcus Aurelius, "The primal Cause is like a river in flood; it bears everything along." A recent British government report says oceans may rise 16 feet this century; a NASA report says maybe 20. Goodbye, Florida. Goodbye, Long Island, goodbye most islands. Goodbye, every coastal city in the world, and every present coast. It is as though planet-Nature is saying to humanity-Nature, "Thank you for your Industrial Age, thanks for the automobile, thanks for setting in motion conditions that will call for the utter reorganization of all the ad hoc arrangements that you dignify with the word 'civilization.' You tried to evolve consciously. Didn't work. But in the process you set in motion conditions that will force change, like it or not – maybe a new evolution, in consciousness and everything else! Change is my delight. You're delightful, for change is what you're good at. Who will you be after your mass migrations, your utter reorganization? You sucked the ancient juices from the rock, oil, and black whiskey. You're drunk on it. Who will you be when you're forced to sober up? What, of the Nature that we are, will you then express? Let's find out."

The survivors are going to have such fun redefining everything. 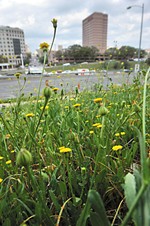 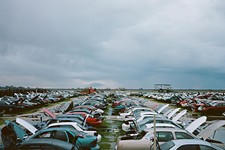