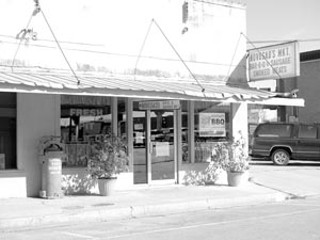 Novosad's BBQ and Sausage Market in Hallettsville takes great pride in continuing a tradition of doing things a little bit different than most of the other barbecue joints on the coastal plains of Texas. In this Czech community they like their smoked meats well done and juicy. Not an easy balancing act for even the most accomplished barbecue-pit bosses.

"There are a lot of Czechs and Germans around here," says Nathan Novosad with a laugh. "And fortunately most of them like barbecue."

His most obvious concession to local tastes is the German-style sausage that comes in pork or beef varieties. When you cut open the thick casing of the Hallettsville tube steak, the coarse-ground meat inside releases a flood of flavorful juices and aromas. Novosad's doesn't use any filler in their sausage; it is pure meat seasoned with garlic, salt, pepper, and "a couple of other ingredients."

"People around here like to see what they're eating," Novosad says. "You grind the meat in the sausage too fine and they can't tell what it is they're putting in their mouths." The little barbecue stand half a block off the courthouse square also makes their own wieners and breakfast sausages, but the hot links are the most popular.

Novosad's grandfather started the Hallettsville business in 1959. Jerry Novosad grew up around Caldwell. He opened his first meat market and barbecue stand in Taylor, but he sold out to the Mikeska brothers, who went on to establish a family dynasty of barbecue restaurants around Central Texas.

Grandpa Novosad headed south to open a meat-packing plant in Gonzales and the meat market and barbecue joint in the Lavaca County seat. "When the Hallettsville market did better than the packing house," Novosad says, "Grandpa closed the Gonzales place and concentrated on this one." He ran the operation until 1983, when his grandson took over.

His grandfather showed him quite a bit about cutting and smoking meat, Novosad says. During the last 23 years of running the restaurant, he has figured a lot out through experimentation. His wife, Laura, contributed the recipe for cole slaw.

The restaurant retains the feel of the old meat market, even though the only meats available are slow-cooked in the pit behind the store. Eight tables covered in yellow and red tablecloths fill the area in the back of the market. The simple menu, written in white chalk on a small blackboard, proclaims the offerings of the day – chicken, turkey, lamb, beef, or pork; by the sandwich, plate, or pound.

"If you like lamb, then you'll really like our lamb ribs," Novosad says. The lamb ribs are smaller and oilier than beef or pork ribs and are relatively hard to find at barbecue joints around Texas. Another fairly unusual cut of meat offered at Novosad's is the pork steak – thick slices of pork shoulder.

What would you like to go with that big slab of tasty meat? Novosad's has a good mixture of side dishes that compliment the main dish. "Granddad didn't do sides except for a simple potato salad and Ranch Style beans out of a can," Novosad says with a laugh.

Besides Laura's "Confetti Cole Slaw," the barbecue market offers homemade mustard-based potato salad, spicy pinto beans, macaroni salad, cucumber salad, and a fresh-baked bread that is worth the price of a meal. "It's all a lot more work, but tastes a lot better than what was offered in the old days," Novosad says.

Novosad's BBQ and Sausage Market was selected as one of the top 50 barbecue joints in the state by Texas Monthly magazine in 1997. Nathan Novosad's day begins at the pits around 5am, with the sausage ready when the doors open at 8am and the barbecue ready by 10am. They close the doors at 105 La Grange St. on Tuesday through Saturday at 3pm. To place an order over the phone, call 361/798-2770.