Tom Ford is creepy and Stephen travels to Houston for fabric 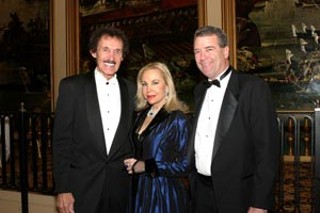 Richard "The King" Petty (l) of NASCAR fame and Dr. Todd Collier of Dallas flank Houston's uber-glamorous Dr. Carolyn Farb from Houston, at Philanthropy World magazine's annual awards in Dallas. In addition to her legendary charity work, Carolyn is on the campaign trail with her close friend and our next governor, Kinky Friedman.

VANITY FARE Eeewww … am I the only one creeped out by Tom Ford on the cover of Vanity Fair? The picture shows a rapidly aging, ridiculously tanned, fully-dressed Ford practically drooling in the ear of a nude Keira Knightley, 20, with a nude, corpse-white Scarlett Johansson, 21, sprawled out below him. Whatever it is that's supposed be occurring, Ford's presence in the photograph turns something rather arty into something rather cheap. I keep trying to imagine the scenario in which Ford wound up there – did Graydon Carter think, "Hmm, who should we put on the cover of the Hollywood issue? I know – a clothing stylist who wants to be a director!" Having him pretending to be intimate with Keira reminds me of when Rosie O'Donnell used to pretend she had a crush on Tom Cruise.

HAPPENINGS Haven't gotten your table for the Texas Film Hall of Fame awards yet? Sorry, Charlie, you're outta luck unless you want to drop a cool $15,000 for one of the best tables in the house. But I warned you a long time ago it was going to sell out… Have you seen the image of the 360 Condominiums going up at Third & Nueces (www.lifesurroundsyou.com)? Wowowow – taller than the Frost Tower and trés glamourous, Austin certainly is entering the 21st century with a bang… The Best of Austin award-winning annual 5x7 Art Splurge & Exhibition put on by the Arthouse is coming up on May 20. Fasten your seatbelts and get ready for another wild romp through the art world, and we'll bring you more details as they are available.

ALLEYCATTING It was my pleasure last week to emcee Estilo's fashion show for Catalyst 8, the young professionals group supporting the Long Center. In Catalyst 8's six-month history, they've raised $85,000 to help defray construction costs. The Long Center's executive director Cliff Redd is doing a fabulous job propelling the project forward – the $77 million project has already got $67 million committed to it, with another $10 million left to raise. The fashion show was classic Estilo – chic, smooth, and loaded with terrific looks. I was standing outside of Estilo when my dear friend Mark Sullivan ran across the street to see me – the 2nd Street District was hopping that night with Shiki and Eliza Page doing trunk shows in preparation for Valentine's Day – so I dropped by both places with him and marveled at what great business they are doing and how beautiful the stores are. I was hangin' with my peeps (I know, I know, no matter how hard I try to be hip, I just can't make that phrase work for me) Cliff Redd, Dennis Karbach (member of the Long Center's board of trustees) and Robert Brown (Long Center's development manager of corporate gifts); we decided to dine at Taverna (yes, again … it's my favorite new restaurant). We'd heard Lance Armstrong and Adam Sandler were there, but we saw no sign of Lance and only some semiconductor salesperson who, on a good day, might have looked like Adam. But who cares? It was practically old-home week as we table-hopped with John & Elizabeth Pecor (have you seen the sign posted at the site of their soon-to-be stylish P&K Grocery at Mary and South Fifth? It cleverly states that the store will be open in "Devembuary," but Elizabeth promises that we'll be seeing them next month); Estilo owners Cami Cobb and Stephanie Coultress (and Stephanie's dreamy boyfriend Todd, whom she always coerces into modeling for them); Sharon Gerhardt (the amazing epicurean concierge for Whole Foods – one of the best caterers in town); the charming Steve Shuck, owner of Second Street's wonderful Mercury Design Studio; and others too fabulous to mention.

CLOTHES CALL I know I've been yammering for weeks about my upcoming fashion show – probably because I still can't believe I'm designing clothes again after such a long hiatus. But it's been in my blood since I was a child designing clothes for my sister's Barbies out of Kleenex and flowers from the garden. My mom and Sister Margaret and I drove to Houston last week to buy fabrics at High Fashion Fabrics – breathtakingly expensive, but carrying some of the most beautiful fabrics on earth (we had a High Fashion Fabrics here in Austin for about five minutes and I'm very sorry they didn't survive). I loaded up on glorious Chinese brocades and liquid charmeuses (well, I can't very well dress Carla McDonald, Patricia Vonne, Eloise DeJoria, and the Mayor in gingham and burlap, now can I?) in electric combinations of brilliant colors … and lots of black, of course (it's springtime, you know). I'm planning on showing luxury resort-wear, lounge-wear, club-wear, and evening-wear for men and women, but like any designer, I won't know for sure what will hit the runway until the night of the show. Show info can be found at www.gat5art.com.